Orange Is The New Black Season 3

The women of Litchfield Prison struggle to find the plot

In place of a social conscience, we have pop culture. It is a conversationally unobjectionable comfort, unsuited to anything but filling Hollywood coffers. Season 3 of Orange Is the New Black is very comfortable. The social ills it engages include racism, transphobia, rape, homophobia, and, most of all, the prison-industrial complex. This makes our binge-watching feel more honest.

Looming over it all is Lost, a show whose redundant flashback structure has been imported here and grown longer in the tooth. All character traits must be foregrounded with strange actions in the past. All plots must be delayed to tell us what we already know. The flashbacks help continue series creator Jenji Kohan's greatest success: her campaign to humanize all the characters in Litchfield prison, from the villains to the comic relief. It is part of the novelistic project of modern television. But in practice, it often delays the story, and tells predictable tales with an excess of melodrama. 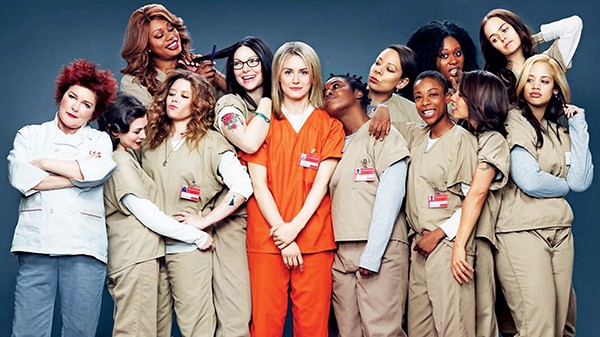 Characters act evil because a villain is needed to drive the plot. Humorous situations don't build into serious ones; they switch on and off the way real world physics does in action movies. A scheme to sell soiled panties online results in bitter betrayal, but it's hard to take seriously because the situation feels like a joke. A silent character grows a cult around her saintly quietude, but when the group banishes a member, her resulting suicidal depression seems strangely hollow. It's the shadow of another show, Kohan's Weeds, whose narrative also suffered from unearned swerves.

This is all offset by the scatology of a comedian hiding the deeply felt in offensive jokes. Jolly Rancher shivs, vaginal discharge viscosity discussions, bifurcated penises in erotic sci-fi literature all undercut any self-seriousness. Orange is full of details expertly delivered by its murderer's row of actors. The only false spot is newcomer Ruby Rose, an Australian model introduced to pay lip service to the concept of gender fluidity. But mostly, she's just there to beat the show's dead horse of a romance. Her love triangle with Piper (Taylor Schilling) and Alex (Laura Prepon) has all the dynamism of a plane stuck on the tarmac.

The best actress is Lea DeLaria as Big Boo, who is even better than Natasha Lyonne at personifying the show's combination of Borscht Belt jokes and real-life hurt. She and Pennsatucky (Taryn Manning), a one-note villain from earlier seasons turned into a squeaky-voiced stalwart, are the season's true stars. There's a moment where Pennsatucky declines to sodomize someone with a broomstick that works as both low comedy and character drama. A wordless sequence devoted to the daily routine of Chang (Lori Tan Chinn), an older woman ignored by the other inmates, is also a highlight. We see her mash Fritos in secret, with her feet. Unlike the flashbacks, there's joy in not knowing where it's going.

The other most successful subplot is the acquisition of the prison by a private company that sets the prisoners to work and cuts the guards' hours in half. Their attempt to unionize is pitiful (their union song is from Les Miz), but the show effectively stresses how corporate structures prevent real reform, because financial pressure privileges short-term gains over things like mental health care, of which prisons are our largest provider.

Against real world problems, the only hope the show offers is a swerve towards transcendence. Laverne Cox and Piper Kerman have both used it as a springboard to discuss transgender rights and prison reform. Does it matter if we can see the strings? John Oliver and Jon Stewart's soapboxes are modern examples of comedy as a method by which actual political discussion can leak in through corporate media. Orange Is the New Black is another unsung example.