Orange Mound Recovery Center To Bring Homeless Inside for Christmas

Center to offer beds, haircuts, showers, and more for holiday.

Robert Weber had stepped in and out of the Warriors Center multiple times before finally deciding to leave life on the streets behind. He graduated from their one-year program in 2007. Years later, he has no doubt about where he would be now had he not chosen to stay.

"Dead," Weber said. "I can tell you for certain that I would be dead."

The Warriors Center, a faith-based program that focuses on addiction recovery and offers beds for the homeless, looks deceptively small from the outside of their building on Semmes in Orange Mound. Step inside, and you'll find immaculate hallways and meeting rooms, 65 beds, and many people with stories similar to Weber's. 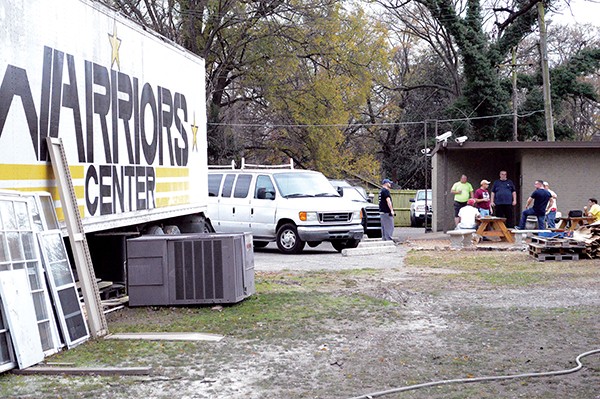 "It doesn't matter if every single bed is full," said Bert Suggs, a graduate of the program who now serves as the director of development. "If we have to, we will line our meeting rooms with cots along the wall, and everyone who's waiting for a spot to open up will at least have shelter."

Come Christmas, the center will be rolling out those cots for one of their biggest outreach events of the year. In addition to providing a free meal on Christmas, they're also offering a chance for Memphis' homeless to get haircuts, take showers, have their clothes washed by center residents, and pick up essential winter gear.

Suggs and other residents involved in outreach hope that those struggling with homelessness will come in for the meal and stay for the chance to rebuild their lives.

The center, which gets its name from the military-style structure and ranking system that their residents must advance through, started in the garage of Executive Director David Vincent. Vincent himself is a turn-around story from a past riddled with arrests and addiction. His final release from jail after numerous felonies resulted in the desire to create a faith-based program in 1999 that would address the needs of the addicted and homeless.

"They come in here, get a hot meal, get treated with respect, and a lot of times they end up staying because they realize, 'Hey, this seems like a good option. It's better than being out on the streets," Vincent said. "We also just opened a women's program, too, because there is a huge need [for shelter] in Memphis for women experiencing homelessness. We really want anybody who needs a second chance to come in."

Suggs acknowledges it's a challenge to keep a facility that sometimes exceeds its bed capacity fully operational.

"It's been kinda tough here lately [financially], because we're not as popular as other programs in Memphis," Suggs said.

The center is, if nothing else, self-sustaining.

"We have a contracting crew [made up of Warriors residents], so we'll do contracting work or painting work. Sometimes we'll contract out and do security for events like the Fair," Suggs said.

In addition to meeting their own operational costs, the residents do multiple community outreach events a year. They'll do free repair work for the elderly and widowed. They'll feed hundreds of meals to the larger community. It's all part of a core value at the center — give back the same help you were offered.

This core value is why you will find center resident's back out in the streets, recruiting new people to help, this winter. They'll look under overpasses and canvass homeless camps, searching for those who need a helping hand.