Peabody’s 145th Birthday Dinner, plus Oysters and more at Local

This year the Peabody turns 145, and to celebrate, they're throwing themselves a party on Thursday, September 4th. It starts with a reception in the lobby, from 4:30 to 6 p.m. Anybody can come to that. But the main event is a seated, five-course dinner at Chez Philippe. The dinner is $85 per person (an additional $35 for wine pairing), and reservations are required.

For each course, the Peabody has recruited a different chef from the history of Chez Philippe. Jason Dallas — currently executive chef at Interim — opens the evening with leek-wrapped scallops. Then it's Andreas Kistler's turn. The current chef at Chez Philippe will prepare pan-roasted pheasant with dried berries and Peruvian potato-truffle puree.

Did the Peabody's 145-year history affect Kistler's choice of menu? Well — not exactly.

"I was going through some of the old menus," says Kistler. "They're fun to look at, but I don't think I could spell most of that stuff, let alone make money with it. Back then they ate kidneys and livers. I don't want to eat that!"

The evening closes with a strawberry shortcake by chef Konrad Spitzbart, served with mascarpone, basil gel, and a crisp pepper meringue. It's certainly a change from 1869, the year the Peabody opened. Back then you could get a room and two meals for $4. But then, you might have had trouble finding any basil gel or Peruvian potato-truffle puree.

Jeff Johnson recently finished installing a 48-tap draft beer system — the largest in town — at Local in Overton Square. It's a veritable bowling alley of shiny chrome and colorful tap handles, boasting craft beers from around the United States.

"Our goal is simple," confesses Johnson. "We wanna be the place people come to get beer."

The new tap system means that kegs won't have to be stored behind the bar; chilled pipes allow them to be tapped remotely. The move has freed up space for a raw bar. On a recent Wednesday, oysters from the Gulf Coast and James River were offered.

And really, what goes better with craft beer than oysters? Start with the fried gulf oysters in wing sauce ($12 for a half dozen). They're lightly breaded, so you can still taste the oyster, and the sauce is lusciously garlicky. Pair them with a pint of Goose Island Lolita, a tart Belgian-style beer aged in wine barrels with fresh raspberries. 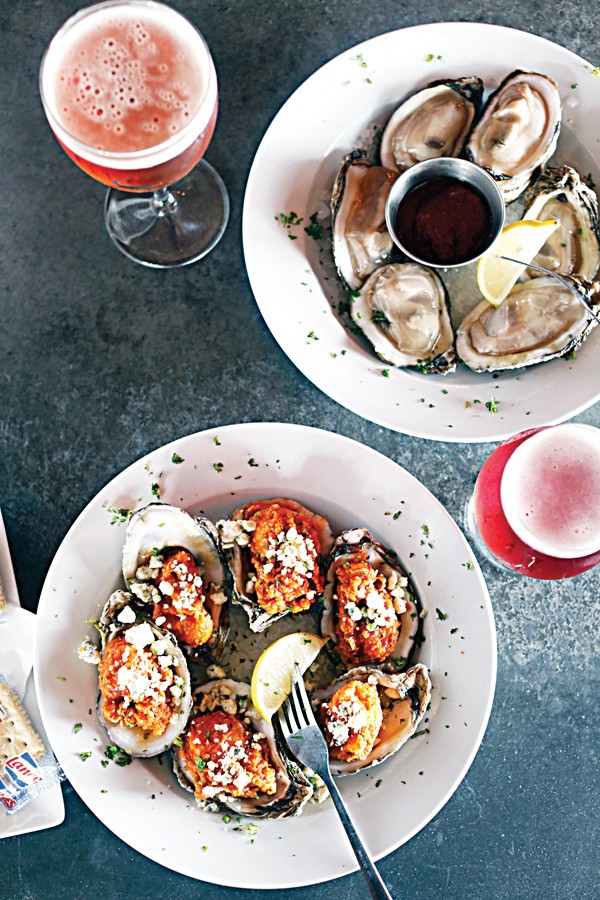 Interested in a classier bivalve? Try chef Russell Casey's grilled oysters with bacon, leek butter, and parmesan ($12 for a half dozen). Pairing bacon with oysters is almost always a good idea — the hearty crunch adds so much — and in this case, the leek butter seals the deal. Pair them with a Dogfish Head Sixty-One, a complex IPA finished with the juice of Syrah grapes.

Or you know what? Just eat 'em raw. Now that it's September, the oysters have stopped spawning, the red tides have subsided, and this gastronome is eager for slimy delights.