Pelosi Has Got to Go

The Democrats are practically salivating over their chances to retake the House and possibly the Senate in November, especially since the treasonous antics of this aberration of a president in Finland with his handler, Vlad the Impaler. However, there are still some major obstacles. I believe that among the reasons that so many people sat out the last election rather than vote for Hillary was their reluctance to return Bill Clinton to the White House. Similarly, I sense that the same voters who mistrusted the Clintons, do not want to see the speaker's gavel returned to Nancy Pelosi.

You know me, Congressman. I have no special insights or inside sources to assist me in formulating an opinion. I'm like a Will Rogers for the electronic age. All I know is what I see, hear, and read from multi-platforms and trusted sources, so when I say the Democrats have problems, that's just my perception of things, backed up with a generous knowledge of history and politics. I believe that this will be a generational election, much like 1960, when the torch was passed to JFK. Former DNC Chairman Howard Dean said, "Nancy [Pelosi] is probably the greatest speaker since Tip O'Neill," but, in the next breath, he said it was, "time for [his] generation to get the hell out of the way." Pelosi has been in the party's top spot for 15 years. That's five years longer than Tip O'Neill. She has been a familiar face since she was elected to Congress in 1987, representing most of San Francisco. That was the same year Michael Jackson released "Bad" and the No. 1 movie was Dirty Dancing. As effective a leader as I believe Pelosi has been, I fear she has stayed too long at the ball.

We both know that a great deal of politics is perception. For instance, the Republicans are perceived as the Neo-Know Nothing Party, thoroughly corrupted and devoid of any social conscience, while the Democrats are perceived as either whimpering simps or simpering wimps who have allowed the word "liberal" to become a filthy epithet and have no true compass for the future of the nation. We also know that the Democrats could fuck up a mayonnaise sandwich and are entirely capable of doing it again. 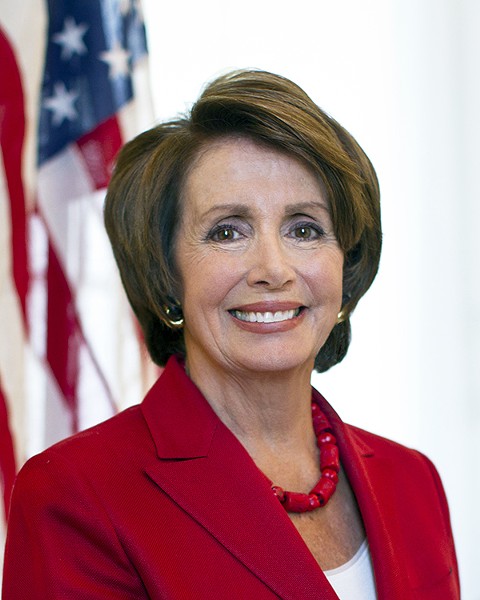 People are clamoring for fresh voices and new leadership, but I only hear crickets from the Dems. The ages of the House Democratic leadership are respectively: Pelosi,78; Party Whip Steny Hoyer, 79; and Assistant Minority Leader Jim Clyburn, 78. I'm not sure if these are politicians or the cast of Cocoon.

During a brief discussion, you told me that Nancy Pelosi accomplished more in a day than others did in a month and that she had the energy of others "half her age." Therein lies the problem. Representatives half her age should already be rising into positions of influence in the party. At least 20 current Democratic candidates have said they will not vote for Pelosi as speaker, causing the party leadership elections to be postponed until Thanksgiving. Matt Fuller of the Huffington Post wrote, "Pelosi was able to save face, delaying the elections herself instead of actually letting the group force her into moving the date."

It's not all about age. We know Nancy Pelosi as the first female Speaker in history, a champion of women's rights, and perhaps the greatest fund-raiser in party history. She also blocked George Bush's plan to privatize Social Security and helped shepherd Obamacare through Congress when others had given up. Conversely, after the Bush regime misled the American people about "weapons of mass destruction" and took the country into an unnecessary war, Pelosi said impeachment was "off the table." Concerning Trump, Pelosi said that impeachment would be "a gift to the Republicans." She concluded, "this is not the path [the Party] should go on."  Don't talk about impeachment? I want that lying, ill-tempered, conniving, money-laundering, puffed-up Putin punk not just impeached but arrested and jailed. Our democracy is burning. If there were ever a time to discuss impeachment, it's now. I don't care if it motivates the Trump cultists, the Democrats' job is to turn out more voters than they do. The Republicans are actively involved in their favorite activity; suppressing the vote.

The right-wing perception of Nancy Pelosi is a blood-sucking San Fransisco liberal who wants to raise your taxes and give it all to MS-13 gang members and abortion clinics. The GOP spent $65 million on anti-Pelosi ads in 2010 and are gearing up to spend even more this time around. The Trumpsters need an enemy, and now that Hillary's gone, Nancy Pelosi is the best they have. Republican ad men believe "her face on the screen stokes fear and anger."

Since Nancy Pelosi took the gavel in 2007, Democrats have lost 39 House seats, yet she still claims impeachment is a "distraction." Former CIA Chief John Brennan tweeted, "Donald Trump's press conference performance in Helsinki rises to and exceeds the threshold of 'high crimes and misdemeanors.' It was nothing short of treasonous." The Need to Impeach campaign of billionaire Tom Steyer has accumulated over 5.4 million signatures, 60 percent of which are "registered voters who don't vote." Steyer said, "We believe fighting against a reckless and lawless president is not something that will turn off voters. I have immense respect for Nancy Pelosi. ... I love her, but I disagree with her on this."

One representative has said, "The time has come to make clear to the American people and to this president that his train of injuries to our Constitution must be brought to an end through impeachment." That was you, Congressman Cohen, and I respect and admire you for your courageous stance.

It is imperative that the Democrats succeed in washing the poison from the body politic in November. There are excellent chances this may happen but not while Pelosi's amped-up, hysterical backbiters blame her for everything from the wildfires in California to trapping a Thai soccer team in an underwater cave. We should honor Nancy Pelosi's long and brilliant service as party leader, but as near-President Al Gore once famously said, "It's time for them to go."