Death. It happens to the best — and worst — of us, eventually. It's the one time you're sure to get your name in the paper, even if you're not going to be around to enjoy it. It is, as writer Neil Gaiman called it, the high cost of living.

"It's natural. We all die eventually," says Dr. Louis Creed (Jason Clarke) to his daughter Ellie (Jeté Laurence) when she asks why pets don't live as long as their human masters. Louis should know. As a doctor who has worked the graveyard shift in a busy Boston emergency room, he's seen a lot more death than most people. But now that he's moved to the small town of Ludlow, Maine, with his family in tow, he hopes to see a lot less of it. Living in the rural community, he can afford a big farmhouse surrounded by 50 acres of forest, and his wife Rachel (Amy Seimetz) can stay home with Ellie and their son Gage (played by twins Hugo and Lucas Lavoie).

Louis' precise but dispassionate explanation of the relative metabolic rates of humans and dogs is scientifically accurate, but does nothing to assuage Ellie's bedtime trepidation about mortality. Rachel, who has her own unresolved issues about death stemming from her sister's untimely demise, scolds him for scaring their kids. But he thinks it's better to be honest with them. You don't have to like death — most people agree it sucks — but you have to accept it as a part of life. 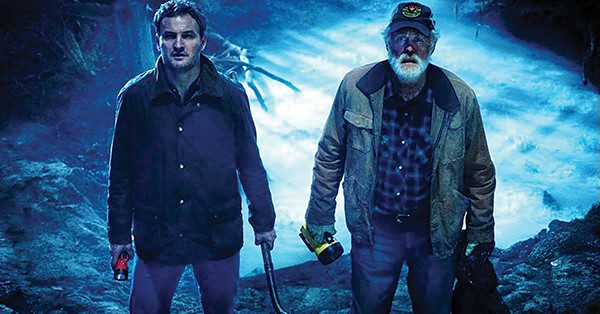 But since Pet Sematary is an adaptation of a novel even author Stephen King thinks went too far ("It just spirals down into darkness," he writes in the introduction), Louis is going to get a chance to learn that lesson anew. Way out back of his new house, far into the spooky Maine woods, Ellie discovers the place where the neighborhood kids have been burying Spots and Rexes for generations. And a bit beyond that, through a tall wall of brambles, bees, and downed trees, is another cemetery on a hill surrounded by swampland. When Ellie's cat Winston Churchill falls victim to one of the trucks that blaze by on the narrow logging road, neighbor Jud (John Lithgow) shows Louis that if you bury something in the hidden boneyard, it will come back to life.

Had Louis reviewed the existing literature on resurrection, he would have known that bringing someone back from the dead is usually a very bad idea. Sure, it worked out okay for Jesus, but for everyone from Persephone to Dr. Frankenstein to Buffy Summers, it would have been better just to let the dead stay buried. In exchange for an all-too-brief relief from grief, complications invariably arise with the revenant. Even after a deceased patient (Obssa Ahmed) returns as a ghost to warn Louis that "the barrier must not be broken," the doctor still can't resist playing god when death touches his own little family.

This is the second time King's Pet Sematary has been adapted for the screen. The first was in 1989, when director Mary Lambert (who did Madonna's classic "Like a Virgin" and "Material Girl" music videos) worked from a script by the writer himself. It came toward the end of a slew of King adaptations that ranged from the transcendent (Kubrick's The Shining) to the cocaine-fueled fiasco (Maximum Overdrive, still King's only director credit). That film is definitely in the top tier of '80s horror, mostly thanks to iconic performances by Fred Gwynne as Jud and Miko Hughes as the murderous zombie toddler Gage, and a classic theme song by the Ramones.

This version, co-directed by Kevin Kölsch and Dennis Widmyer, definitely carries the stamp of the art horror movement. Even more so than the 1989 incarnation, it relies on visual atmospherics and a slow burn pace. Unsurprisingly, Lithgow is the most compelling onscreen presence. His Jed is a darker, more subtle version than Gwynne's avuncular Mainer. Clarke plays Louis as a likable but bland everyman, leaving a brittle Seimetz to trace the family's decaying emotional orbit. Laurence is the film's breakout star, if only for her delivery of the line, "I'm dead, aren't I?"

Pet Sematary is a perfectly functional little horror movie. It doesn't truck in '80s nostalgia, and its significant changes to the source material mostly turn out to be improvements. Unfortunately, the viewing experience suffers from hitting theaters just weeks after Us turned the genre inside out. That's not the film's fault, of course — being upstaged by a genius happens to the best and worst of us — but if you're not a genre diehard or King completist, you can be excused if you find it a bit underwhelming.