Playhouse scores with a light, loving Priscilla, Queen of the Desert.

Director Dave Landis doesn't think Pride Month had anything to do with dropping Priscilla, Queen of the Desert into this season's summer musical slot at Playhouse on the Square. June may have found Big River Crossing lit up like the bridge from Oz, but, as Landis noted, "Memphis always has its parade [later]." Still, for those who fancy a light comedy with swell design, infectious songs, and choreography that makes you want to join in on the fun, there's a lot of pride-worthy stuff going down at the corner of Cooper and Union.

Though seldom deeper than a Hallmark card, Priscilla's a big, heart-shaped box of brightly colored jukebox candy. With an unavoidable dependence on sequins and spectacle, a top-40 sing-along soundtrack, and a script lifting plot and dialogue from the popular '90s-era film of the same name, Priscilla threatens to melt into so much sentimental kitsch — a Mamma Mia! for the last generations raised on the radio. But Landis and his able-bodied ensemble keep things campy or real, depending on what's called for, while aiming their big pink bus for the glitter-kissed soul of a buddy/road story celebrating quirk, werk, and mere survival.

Tick, who's sometimes known as Mitzi, has a secret that might just cause his friends to faint. He was married once, and he's got a tween son he's never met. Tick's amiable ex aims to rectify all that when she hires her baby-daddy to bring a big-city drag show to the small town casino she books. To fill out his chorus line, Tick turns to his younger friend Adam/Felicia and his older friend Bernadette, and the three pals set out on a fabulous journey fraught with danger, self-discovery, insane costumes, and (of course) engine problems in the middle of nowhere.

Have you ever wondered what it might be like to watch Playhouse regular David Foster (as Bernadette) lip sync while his fellow musical-theater heavy-hitter Claire Kohlheim belts out "I Will Survive"? It's a glorious thing, as is Bernadette's master class in the history and nuances of real fake singing.

Daniel Gonzalez delivers a solid performance as Tick, and Bruce Huffman owns the stage — and some of the show's wilder costuming — as the occasionally caustic, always over-the-top Felicia. But it's Foster who carries this show's disco-ball heart across the finish line, unshattered. 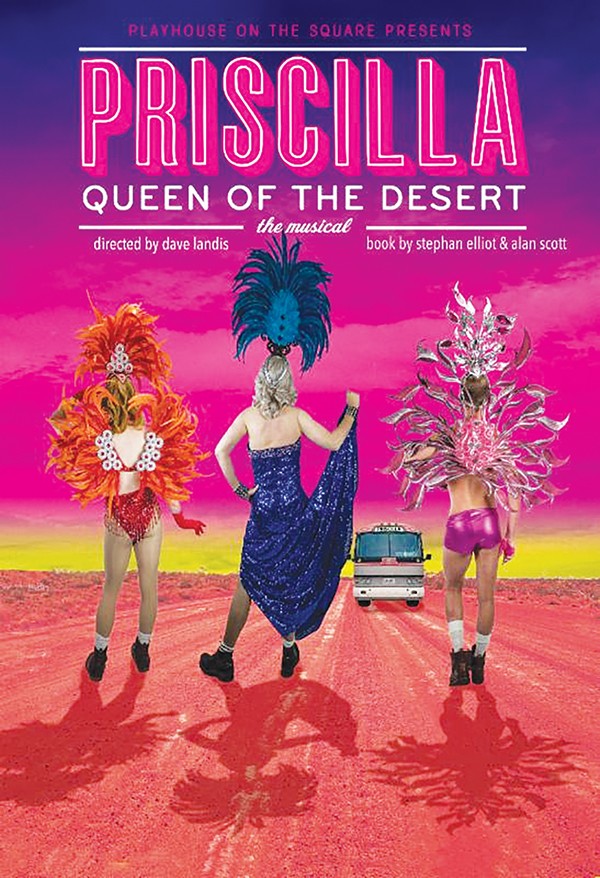 Priscilla marks a welcome return to the stage by character actor Mark Pergolizzi, who plays Bob, an effortlessly hip, rural mechanic who takes a shine to Bernadette and volunteers his services to make sure the performers make their big show on time.

In the early 1990s, Australian cinema gained a reputation for quirkiness with films like Muriel's Wedding and Strictly Ballroom. Priscilla's story of two drag performers and a trans woman from Sydney traveling across the desert to perform a show fits the profile perfectly. A drive to press glam to the limits on a limited budget forced Priscilla's original costume designers to make some wild choices, fashioning elaborate headgear out of chicken wire and fancy frocks from cheap flip-flop sandals purchased at a discount from Target. By most accounts, the movie's actors wearing these outfits suffered and sometimes even bled for their art. Taking its profile cues from the movie, then taking everything up a notch, Playhouse's designers Kathleen Kovarik (costumes), Ryan Howell (sets), and John Horan (lights), have all outdone themselves, filling an essentially empty space with white fur, gold lamé, mirrored surfaces, and millions of sequins, then flooding the stage with enough saturated color to make the proudest rainbow blush.

In many regards, Priscilla aims low. None of its creators ever fretted that audiences might not leave the theater humming, "Girls Just Want to Have Fun" or "MacArthur Park" or John Denver's "Thank God I'm a Country Boy." The music's already embedded in our pop consciousness, some of it (maybe most of it) nearly ruined by aggressive commercial use. To that end, what might have been easy appropriation starts to look like something of a restoration.

Though they share a similar sparkly aesthetic, Priscilla is ultimately as working class and real as Playhouse's season opener, Mamma Mia!, was a fantasy of free spirited privilege. Common themes of children reuniting with lost parents make these populist sing-alongs uncommonly complementary bookends.

Priscilla, Queen of the Desert at Playhouse on the Square through July 9th