Climate change will be an issue in the presidential race — and in years to come.

NASA announced last week that July 2016 was the hottest month in the recorded history of planet Earth. Last month, the agency reported that the first six months of this year was, overall, the hottest half-year in recorded history. That news came as a spate of record-breaking floods killed people and destroyed property from Maryland to West Virginia to Louisiana.

A Stanford study recently found that 90 percent of Democrats and 80 percent of independents believe global warming will be a serious or very serious problem for the United States. Barely half of Republicans feel that way.

That political divide is on display in the presidential campaign.

"I'm not a big believer in man-made climate change," GOP presidential nominee Donald Trump told a Florida journalist this month when asked about its effects on coastal communities in the Sunshine State. "There could be some impact, but I don't believe it's devastating impact."

Previously, Trump had tweeted "Any and all weather events are used by the GLOBAL WARMING HOAXSTERS to justify higher taxes to save our planet! They don't believe it $$$$!"

Mike Pence, Trump's vice presidential nominee, was one of the most vocal climate-change deniers in Congress during his tenure, saying flatly "global warming is a myth" on his campaign website.

Meanwhile, Democratic nominee Hillary Clinton is calling out Trump and Republicans for being blinded to scientific reality by politics. 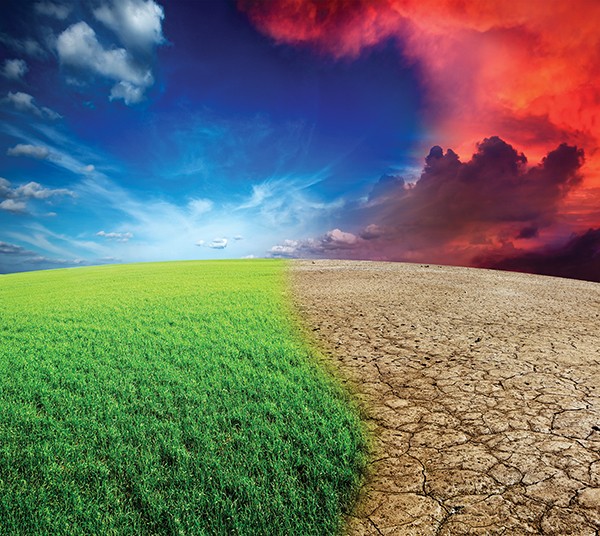 "I believe in science," Clinton said in her acceptance speech at the Democratic National Convention last month. "I believe that climate change is real and that we can save our planet while creating millions of good-paying clean energy jobs."

There is also good political reason for Clinton to fight Trump and Pence on the issue. At a minimum, she gains points with environmentalists and the large number of young voters who, according to polls, strongly believe there is a climate change problem.

And it's not just young people. A Gallup poll taken in March found that 64 percent of Americans say they are concerned a "great deal or a fair amount" about global warming — the highest number in eight years.

Trump, however, sees political gain in downplaying climate change. He promises to reopen coal mines and reopen smokestack industries in Midwest states such as Michigan, Ohio, and Pennsylvania.

The latest RealClearPolitics polling average shows Clinton with a solid lead over Trump in two of those three states: 7 percent in Michigan, 9 percent in Pennsylvania.

President Obama is adding to the pressure on Trump and the GOP majority in Congress. Last week, he released new fuel-efficiency standards on "heavy-duty" trucks and equipment in order to meet a goal agreed on with Canada and Mexico for half of all power in North America to be free of carbon dioxide by 2025.

The president devoted his entire weekly address to the issue two weeks ago: "One of the most urgent challenges of our time is climate change. We know that 2015 surpassed 2014 as the warmest year on record — and 2016 is on pace to be even hotter." He challenged Congress to build on the progress made in the Paris Agreement last year, where the nations of the world made proposals to reduce greenhouse gas emissions.

Even after Obama leaves the White House, the issue will remain at the front of the political agenda. Congress is going to have to deal with reauthorization of the National Flood Insurance Program next year.

As a political issue, climate change is definitely heating up. Expect one of the candidates to get burned on it in the debates; the polls show the candidate on the defensive will be Trump.

Juan Williams is a Fox News political analyst and the author of Eyes on the Prize: America's Civil Rights Years, 1954-1965.