Memphis proposals are increasingly looked at skeptically on the Shelby County side of the street.

There has been much written and said recently about Mayor A C Wharton's problems with his city council — problems which, partly at least, involve the council's negative reactions to a host of proposals made in the last year or two by the Wharton administration.

As a reminder: These negative reactions, which boiled over toward the end of last year, involve a growing feeling among council members that administration proposals are 1) ill-considered, or 2) incompletely explained, or 3) financially askew, or 4) all three.

As a corollary, propositions emanating from the city, especially those that require some form of assent or financial participation from the Shelby County Commission, have begun to exacerbate another divide — that between the Memphis city government, per se, and Shelby County government, which, increasingly, especially among certain members of the commission, is regarded as an undependable and mooch-minded poor relation. 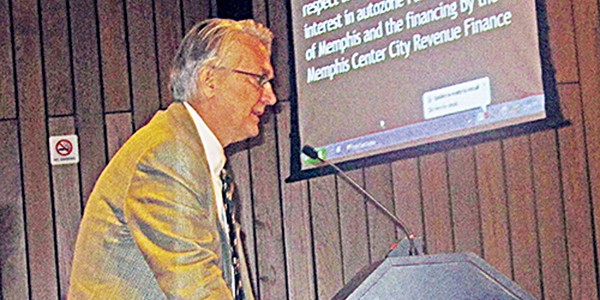 Here is part of what Commissioner Steve Basar said Monday afternoon on the city's alleged sins of omission and commission:

"I'm glad at least that they've finally acknowledged that they are taking money from education, one, and, two, that even their attempts to try and make things even aren't coming close to making things even. ... They're making promises. They promise to give us money for schools. They owe us $57 million there. They promise to pay for EDGE. They haven't fully funded that one. I just see a lot of empty promises from the other side of the street."

This was apropos the latest of several developmental propositions that have floated over from City Hall under the auspices of the city's director of Housing and Community Development, Robert Lipscomb, who, under Wharton and mayoral predecessor Willie Herenton, has become something of an all-purpose planning czar. Indeed, there is an edgy saying in local government circles describing Wharton as "the second mayor to work for Robert Lipscomb."

In fairness, Wharton sees himself as struggling to move the city forward in a time of contracting local revenues. As he acknowledged during a conversation at the Shelby County Democrats' recent Kennedy Day Dinner, that means a certain dependence on funding from elsewhere, and that's where Lipscomb comes in.

Highly leveraged so as to capture available state and federal funds, Lipscomb's proposals often involve the partial diversion of local sales-tax revenues to help fund this or that ambitious project. To the extent that these revenues — usually based on "incremental" increases of sales-tax money in the target area — are re-routed from state coffers, they generate no great hue and cry locally.

But, as Basar and others have protested, there is often the risk — as in the Wharton/Lipscomb proposal for a Tourist Development Zone (TDZ) project to develop the fairgrounds site for retail/sporting purposes — that the revenue net is cast too wide, not only potentially cannibalizing incremental tax revenues from adjoining areas (Cooper-Young and Overton Square in the case of the writ-large Fairgrounds TDZ), but actually reducing the portion of such revenues destined for local schools.

Basar sounded the alarm about such a prospect back in October and was backed up by Mike Swift, Shelby County director of administration and finance, who agreed that both the state's portion of sales-tax proceeds in the TDZ and the local-option sales-tax portion could be claimed by the proposed TDZ area. Swift added, "To the extent that it would impact the local-option sales tax, half of that off the top goes to schools, and therefore it would be a reduction in what goes to schools."

That reduction could total as much as $1 million a year over a 30-year amortization period, and the city has, as Basar indicated, acknowledged the financial impact to school funding. Accordingly, city officials — offering a new gym and a multi-purpose building for the schools by way of compensation — had asked the commission to postpone action on a Basar resolution on Monday's commission agenda.

The Basar resolution would have put the commission on record as asking the state building commission to reject the city's application for the Fairgrounds TDZ. The resolution won a majority of 6 to 4, with one abstention, that of Chairman James Harvey, and narrowly failed, as seven votes were needed for passage.

With Republicans voting yes and Democrats voting no, the vote was taken in the wake of the defeat of an outright request for deferral by Commissioner Steve Mulroy and amounted to a sort of back-door deferral. City officials, given largely pro forma support by Shelby County Mayor Mark Luttrell on Monday, had asked the commission for additional time to negotiate aspects of the TDZ package.

"Fine, great," Basar had said, somewhat sardonically, about the prospect of further negotiation, essentially between the two mayors. "But ... it's our resolution. I'm kind of offended that no one from the County Commission has been included in those talks at all."

Earlier in the meeting, the commission, easing off last week's committee decision to defer action for two weeks on supporting the city's arrangement to purchase AutoZone Park, had voted, as a partner in the original 1998 stadium package, to acquiesce in the deal. "Good luck for baseball," Harvey pronounced after the vote.

That outcome, more reluctant than is indicated by the vote total of 10 to 1, with one abstention (that of Mulroy, who, with Henri Brooks, wanted more concessions for low-income Memphians), was influenced by pleadings from John Pontius, treasurer of the Memphis Redbirds Baseball Foundation, that the National League's St. Louis Cardinals, whose purchase of the Triple-A Redbirds is a contingency of the deal, had other suitors.

But the bottom line — despite a residual pocket of sympathy for city undertakings, by commission Democrats, especially — is that the County Commission, heading into an election year, is increasingly dubious about proposals coming from City Hall and inclined to assert its statutory powers as a local governing body.

As the filing date of February 20th for countywide offices approaches, it begins to appear that the Democratic primary for Shelby County mayor, among other offices, could be a highly competitive affair.

Some name politicians are among those who have drawn petitions to compete in the May 6th Democratic primary for the right to oppose incumbent Republican Mayor Mark Luttrell. Former Shelby County Commissioner Deidre Malone has long had her hat in the ring. But she has been joined of late by such petition-pullers as County Commission Chairman James Harvey and former (and possibly future) Shelby County Schools board member Kenneth Whalum Jr.

Not to be too coy about it, a line-up of such prominent African-American Democrats increases prospects for an entry by Shelby County Commissioner Steve Mulroy, especially inasmuch as Mulroy has himself received private commitments of support from significant black political figures.

The term-limited Democratic commissioner, a law professor at the University of Memphis, has focused of late on applying for open federal and state judgeships but has long considered the possibility of running for county mayor.

The new commission format of 13 single districts will undoubtedly result in highly contested races on both the Democratic and Republican sides of the ledger. Watch this space.