Spring is always a busy and exciting time for Memphis' Voices of the South Theatre Company, a scrappy troupe dedicated to creating, producing, and touring original plays steeped in the regional traditions. This spring, however, is perhaps even busier and more exciting than usual as the company prepares to open Alice Rainey Berry's play It's All GREEK to ME at TheatreSouth as a kind of preview for the company's annual Children's Theatre Festival, which launches later in May on the Rhodes College campus. Berry and company do all of this without the aid of longtime company member Jerre Dye, who has relocated to Chicago where his play Cicada, has opened to enthusiastic audiences and positive reviews. 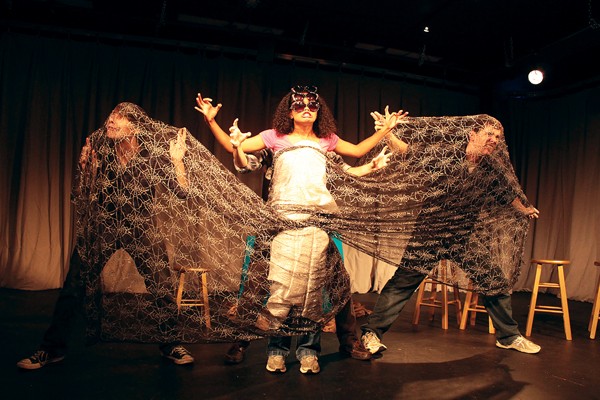 "I couldn't be more proud. Tears come to my eyes when I talk about Jerre and how far Cicada has gone," says Berry, who co-founded Voices of the South with Jenny Odle Madden and starred in Cicada's earliest Memphis productions. "It's so awesome that this story that has been so important in my own personal life is finding a wider audience." Berry is also the creative force behind It's All GREEK to ME, a smart, funny run through classical mythology.

"The narrative theater style has been so important to me. As a co-founder of this company, I want to see us carrying on that tradition," she says, praising her cast for extraordinary contributions to the creative process.

"They worked on all the stories and created all of the original music you'll hear," Berry says. "It was a learning experience for everybody. As the director, I was teaching the interns about the form and the process. They were teaching me how to let go, give them more room, and allow the show to be theirs."