Once, in my younger days, I thought it was a terribly clever idea to prank call the planet. Which is how I know that at one point in history there were three people named Mortimer Underhill living in London, England. With long distance rates being what they once were, I didn't pull a stunt like that on my phone. So, about three weeks later, there was also one set of parents in Baton Rouge who had a terrible time reconciling their daughter's overseas phone bill. She later admitted it was pretty funny, but I was still on the hook for dinner.

So when I saw that Wiseacre Brewing had a black IPA called Prank Calls to Satan, I was intrigued. And why not? My ill-advised yet expensive quest for Mr. Underhill was entirely fueled by barley-water. This is the sort of imbecility we used to do in a world before the internet and Caller ID. 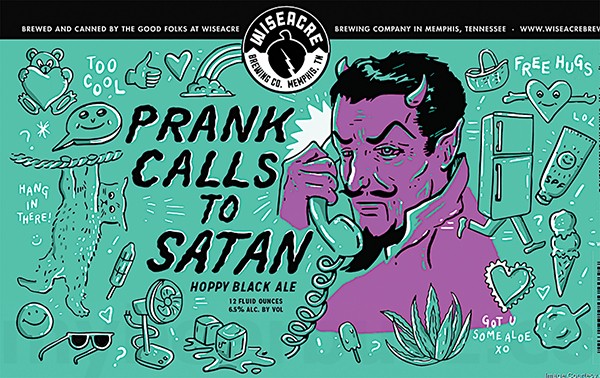 There is no real history to black IPAs. The brew is still considered an emerging style, although you see it around fairly often, these days. It is an ale with IPA-level hopping that also has a distinct toasted malt flavor. While it looks like a stout, it lacks the heavy body of that style.

I'll admit that I've never been an unqualified fan of some of these "emerging" styles. Some of them can be too clever by half. And there are plenty of very traditional practices that, like the Salem Witch trials, really ought to remain a historical curiosity. I'm looking at you, Sour Beer. On the other hand, it's no good standing in the way of innovation, either.

It was on a rainy, almost warm day that I headed over to Wiseacre to test Prank Calls to Satan.

It's available in cans, but a trip to the taproom over on Broad is almost always worth it. The rain coming off the overpass gives the porch an urban groovy backdrop, and inside it looks like a family garage that has been taken over by an artistic, pot-smoking son — the one no one trusted to go to college out of state.

Wiseacre calls Prank Calls "deceiving and fun." It's deceptively drinkable is what it is. Honestly, I was annoyed it had taken me this long to try it out. The highly toasted malt gives it a deep, dark color, but it's much lighter than anything we'd call a stout. With the just right amount of Delta and Chinook hops, this ale has a crispness that isn't usually found in a toasted beer. It is a solid 6.5 percent ABV, but the 40 IBU hits a great balance of bitter body.

In short, this is a beautiful note to hit on a Memphis afternoon that can't decide if it's winter, spring, or summer. And I imagine that it would go well in the fall as well.

As for what to eat with it, the hoppy crispness opens up possibilities, because it likely won't overpower other flavors. All kinds of tapas and appetizers would do the trick, especially the stinky cheeses. To be clear, Ramen noodles wouldn't stand up to it, but this Black IPA will play well with a cheeseburger or a pizza. As much as I love barbecue, however, I can see how it might confuse the issue.

The guys over at Wiseacre named the beer after a Far Side cartoon that made them giggle. For me, all I could think of was making phone calls at 2:30 a.m. (8:30 a.m., London time) looking for a chap whose parents had saddled him with some ridiculous name I'd just made up. Mentally, that's a strange place to go for a beer, but it was fun. The perfect beer to toast idiotic collegiate foolishness ruined by technology, and the manual transmission, while I'm at it, and, of course, one Mortimer Underhill, Esquire.