When Alex Chilton reinvented himself in the 1980s, he mined cleaner sonic territory, playing tightly focused R&B, soul, country, blues and pop that he would stick with for the rest of his life. And even these genre studies hinted at his deeper understanding of music, littered as they were with jazz chord clusters played with reckless abandon. "The Thelonious Monk of rhythm guitar," as Tom Waits dubbed him. In live shows, he occasionally laid into an old chestnut like "Misty," and his records were sprinkled with gems like "Volare," "April in Paris," or the free jazz rave up of "Wild Kingdom." (For those who don't know Chilton's original 80s releases, the recent compilation From Memphis to New Orleans (Bar None) collects many of the highlights).

But until he released Clichés in 1993, his jazz chops were more implied than explicit, except for those who knew him well. Even Clichés, which featured him singing standards with his own sparse acoustic guitar accompaniment,  was a sleeper, being a uniquely restrained album for its day. Around that same time, he was the featured singer on three more standards, "Look for the Silver Lining," Like Someone in Love," and "That Old Feeling," recorded by the jazz ensemble Medium Cool for an even more obscure album, Imagination. Nowadays, both records are out of print. 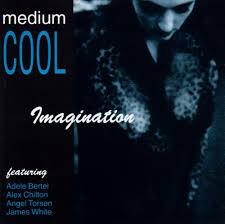 So it's a relief to see material from both albums available once more, along with four previously unreleased full-band tracks, on Songs from Robin Hood Lane (Bar None). The title harks back to Chilton's childhood home in the Memphis suburb of Sherwood Forest, when the seven-year-old first became enamored with Chet Baker's voice. But the album also evokes a later period in the artist's life, when the Chiltons moved to a roomy old house in Midtown and hosted popular salons for artists and musicians.

"When I was ten, it was party time around my parents' house," Chilton recalls in the biography, A Man Called Destruction. "I remember countless nights of going to sleep with, like, sixteen jazz musicians playing downstairs." His father, a jazz pianist, had a record collection fully stocked with such artists as Ray Charles, Charles Mingus, Cannonball Adderley, and Dave Brubeck, and would demonstrate the theory and chords behind the music to his son. Though soon overshadowed in the public eye by the blue-eyed soul of the Box Tops, the power pop of Big Star, and the deconstructive genre-busting of his later years, Chilton's love of jazz never faltered.

You might call the album North Montgomery Street, after those Midtown salons, but what matters most is the music. These tracks reveal a nuanced jazz singer, in the mellow, unaffected manner of his beloved Chet Baker, yet with Chilton's own personal stamp. The real magic is in the effortlessness of the phrasing, the clarity of his tone. Or perhaps it's the  effortlessness of his pitch, for the iconic melodies fit his voice like an old pair of gloves.

The album sequence skips among the two albums' cuts, with restrained band tracks flowing into Chilton's solo guitar work and back. One standout from Clichés is "My Baby Just Cares for Me," with its ever-tumbling bass line and lyrics delivered with aplomb. And while the songs originally released on Imagination were associated with Baker, the newly released tracks are nods to Ray Charles' version of "Don't Let the Sun Catch You Cryin'" and Nancy Wilson' "Save Your Love for Me." In sum, it's some of the most heartfelt singing Chilton ever did, performed with his minimalist knack for understatement.