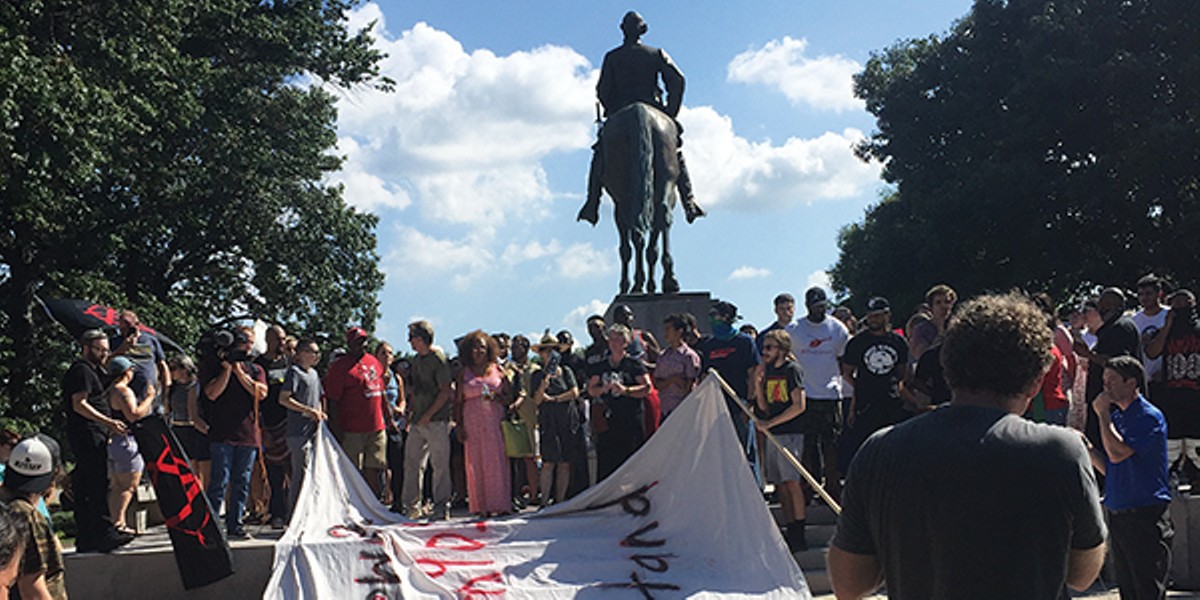 At 3 p.m. on Saturday, about 250 people gathered in Health Sciences Park around the Nathan Bedford Forrest statue.

"Whose city? Whose park?" went one chant.

"The people united will never be defeated," went another.

Those in support of the statue weren't overtly present, though there were some reported sightings. Perhaps it was the heat (heat index 105) that kept them at bay.

Protesters tried to drape the statue in a giant cloth banner and made some headway before the action was quashed by police.

One man yelled for the speakers to stop cussing. The response? "We're here to take the motherfucking statue down!"

A second attempt at draping the statue led to arrests. Protesters surrounded the cop car to keep them from leaving. The car backed up, bumping into some people, which brought a brief but scary flash of Heather Heyer's murder in Charlottesville. One woman began to sob.

And then another chant: "Protect the people, not the statue."

At some point during the event, a call was put out for elected officials to come and speak. There was no response.

Meanwhile at the Crosstown Concourse, both Mayor Luttrell and Mayor Strickland were there for the grand opening of the $200 million project that Todd Richardson, one of the masterminds behind Crosstown, called a miracle.

That event drew between 10,000 and 13,000 people. There were two balloon drops. The balloons were green, black, and white.

The protesters at Health Sciences Park want the statues down, yes, but they also demanded equality across the board — in education, in transportation, in how they are treated by the cops.

Protect the people, not the statue.

• It appears as of now that Strickland is determined to follow the letter of the law in regards to the removal of the statues of Forrest and Jefferson Davis, but wouldn't it be cool if tomorrow when when we woke up, the statues — poof! — were gone? Now, that would be miraculous.

On Sunday, Strickland issued a statement on Facebook after being chastised for "leaning closer and closer toward white supremacist apologetics" by a pastor in The Commercial Appeal. Strickland's response was testy, to say the least, and read in part, "I want every Memphian to see the divisive, empty rhetoric that the media chooses to highlight. I want every Memphian to see the absurdity of someone accusing the mayor who is actually working on removing Confederate statues as being an apologist for white supremacists."

This worked out really well for him because now people are calling him Trump.

• This week's cover story is about the University of Memphis' football team and primarily their quarterback Riley Ferguson. Last season, Ferguson emerged from under the shadow of Paxton Lynch and did a pretty good job of it.

My takeaway from the story is that the team will win it all.

• One last thing, this Friday, August 25th, is the last day to vote in this year's Best of Memphis. I may have mentioned before that I will not say if you don't vote you can't complain. Complain all you want.

The 2017 Best of Memphis issue will be on the stands September 27th.