Should Memphians support Nashville’s NHL team? Or are there bigger catfish to fry?

I'd like to extend hearty congratulations to our friends in Nashville for the accomplishments of their professional hockey team. Even without a championship trophy, for the lowest-seeded team to defy probability and conventional wisdom is worth celebrating. I watched more of the Comey hearing than the NHL Playoffs, but I hear it was a hell of a run. Of course, there's nothing as satisfying as winning it all, but proving people wrong and upsetting the Understood Order of Things is pretty fun. It's sustained us Grizzlies fans for a few years now.

Rallying a community behind a team is fun, too. There's an electricity in the air that everyone can feel. It intoxicates even non-sports fans and turns them into diehards, if only for a few weeks. It takes an extra special kind of success to captivate a city in which ice is known more as something you put in your sweet tea than a surface for skating.

It's impressive. I suspect it's also the reason Predators mania hasn't exactly set Memphis ablaze. The only thing setting this city ablaze is the oppressive heat, and the fact that "winter" sports are still being played in this hemisphere in June feels like a slap in the face. Or maybe that's just the humidity. I'm sure lots of Memphians rooted for the Predators, but there weren't enough for Memphis to crack the top 10 TV markets for any of the Stanley Cup final games. Memphis has, however, consistently ranked in the top 10 for NBA Finals viewership. Even during the massive power outage. The Grizzlies' season ended nearly two months ago.

Two years ago, I wrote that it was time to stop comparing Memphis and Nashville. The unique experiences of a Grizzlies game versus a Predators game neatly illustrate the cities' different personalities and how they don't always make sense to each other. Take, for example, the tradition of throwing catfish onto the ice. How do the fish enter the arena? Does security look the other way, or do fans smuggle the seafood in their pants and purses? If the latter, how does one — you know what, nevermind. I don't need to know. 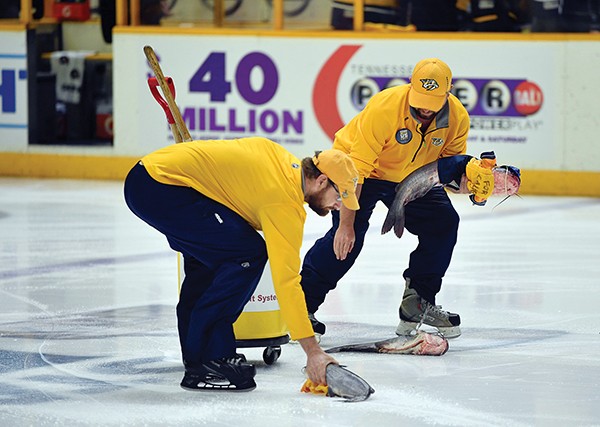 From country singers and catfish to wrasslin' and "Whoop That Trick," our sports traditions are, like our general civic vibes, different. Yet the question keeps popping up: Why doesn't Memphis support the Predators?

Uh, why should we? Because we're in the same state? What if we don't know a single thing about hockey because we live in Tennessee, specifically the part of Tennessee where Ball Is Life?

Instead of pinning Memphis' perceived disinterest to hatred or jealousy of Nashville's success, remember that many of us did set aside our saltiness to root for the Titans in the Super Bowl back in the year 2000, long before Nashville became Smashville. And then consider that this is a city that shuts down at the mere threat of snow. Last year an ice skating rink closed because of winter weather. So excuse us if we're a little slow to hop on the honky tonk Zamboni. After all, this is the South. Like a lot of things in Nashville (for better or worse), hockey is a transplant. Just as the first generation of "lifelong" Memphis Grizzlies fans is coming of age, hockey's legacy in Nashville is still taking root. Give it time.

Maybe someday instead of a Grizzlies/Predators cross-promotion concocted by their cable broadcast station, "Team Tennessee" will represent a shared attitude between the two biggest cities in the state. The pettiness is fun, but there are bigger fish to throw. Like the jock and the nerd in a high school movie, it's time for Memphis and Nashville to discover the only way they can outwit the principal is by setting aside their differences and working together.

I'm not sure which city plays each role in this metaphor, but the upcoming statewide election is one example of an opportunity to team up and save the school. Governor Haslam isn't eligible for a third term. It's early yet, but four people have declared their candidacy. One is Mae Beavers, whom you may recall as the author of the anti-porn resolution and assorted other terrible bills. We don't have to love each other's sports teams, and we soon won't even have to share an IKEA anymore. But can we at least join forces to ensure Tennessee won't be run by a bunch of monsters? That seems like a good start.

Jen Clarke is an unabashed Memphian and a digital marketing strategist.