Some key decisions were made for Railgarten this week that would direct the path forward for the Cooper-Young entertainment complex to open permanently and completely.

Railgarten has faced numerous questions since its initial opening last month on parking, codes, and its use of shipping containers. Martha Hample, one of Railgarten's owner, said she and her group of partners did not intend to break any rules and are doing everything they can to comply with code and get fully open (parts of the complex are already open).

The Memphis City Council was set to review Railgarten's permit in a Tuesday hearing scheduled after our print deadline. Then, Railgarten was slated for another review Friday by the Board of Adjustment, which could allow its owners to open the big backyard once again. — Toby Sells

Memphis Flyer: Has it all been frustrating?

Martha Hample: It's stressful. At the outset, when we first started to realize — me and the other investors — what was happening, we were like "this is a learning experience. We're doing something no one has ever done. We're being creative. We're making decisions about how we want to use the space on the fly because we're being creative."

But as it's worn on and on and on, we're starting to go, "oh my god." It's a little scary more than frustrating. We put [in] so much heart and soul and energy and money, of course, and gotten people excited about it. We've done all this creative and, all of a sudden, we're in a tough place.

MF: But you had help to channel that creativity, though.

MH: We did hire a consultant, a land use consultant [Brenda Solomito-Basar, Solomito Land Planning]. She's a good one. She represents many people. That's not to put the onus on her at all. It's more to say that we tried to do the right things and hire a structural engineer and hire [the land use consultant] and get the right information. 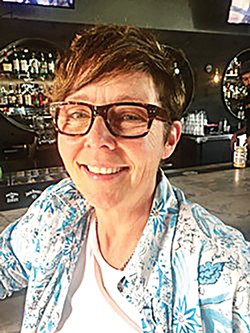 MF: Talk about the parking situation a little.

MH: Truthfully, we got an overwhelming response that first weekend we opened, April 5th. We weren't prepared for how many people were going to show up, frankly.

Sure, some people did some parking in some wrong places. But the truth is, this is urban. There is street parking. People can walk. We're doing what we can to encourage people using ride-sharing [services] like Uber and Lyft. Ride your bike, ride your skateboard, walk, share rides with friends.

We have since — and this one of the things the council wants to know — done due diligence on leasing some parking. We have leased an additional 140 spaces beyond what we have on site, plus along Blythe.

MF: Is there anything you want to add?

MH: There were some moments when we wished we would've turned left when we turned right.

The council is expecting us to meet some certain stipulations before we come back on the 23rd, parking being the obvious one. There were also some noise issues early on. We got a sound guy in the next day, and we fixed that. We've agreed to stop the music earlier.

There are some other stipulations, and we're like, "yeah, absolutely. Tell us what we need to do to pass muster, get open permanently, and make everybody happy about this." We want people to be excited. It's for us, and it's for Memphis, and our employees.

For the full interview with Hample, visit memphisflyer.com.