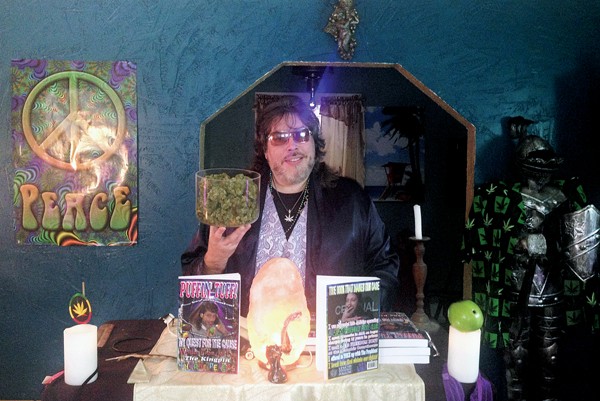 Thorne Peters entered the public eye in 2009, when he made local news for operating a "420" friendly nightclub in Millington. The self-proclaimed "Poet Laureate of Planet Earth" was an easy target for local media when he turned down a guilty plea and decided to do 19 months in jail while waiting to go to trial.

Now that he's a free man, Peters hasn't exactly put away the pipe. Instead, he's turned into a full-blown marijuana activist, actively selling and smoking weed on his YouTube channel while calling out everyone from Judge Joe Brown to Barack Obama on what he considers to be unfair marijuana laws in America.

We caught up with Peters to find out about his latest project, the "Cannabag Challenge," a spin-off of the ALS ice bucket challenge that involves dumping a bunch of pot on your head in the name of marijuana law reform. Peters recently posted a YouTube video of himself partaking in the challenge and calling on others to follow suit. — Chris Shaw

Flyer: What inspired the Cannabag Challenge?

Peters: I had seen the ice bucket challenge raise awareness about the crippling disease ALS, and it occurred to me that there are far more people who are going to suffer from the laws against cannabis than will ever suffer from ALS. I realize it comes across like we are party crashers, but sometimes that's what you have to do. There are people whose lives are being destroyed by these laws. I'm always looking for ways to express the outrage I have over these restrictive laws on cannabis. I've done the challenge here with seven people, and I encourage everyone else to do it.

This isn't without precedent. In 1972, when I was in the fifth grade, we had a book drop across the schools of America in protest of the Vietnam War.  I was 10 at the time, and the war had already gone on for 10 years. It seemed like I was on my way to being one of the casualties they showed on the battlefield. We all dropped our books, and a month later, the peace talks were negotiated. It felt like we had really done something. Even if I'm the only one who ever does the Cannabag Challenge, the point has been made.

Have you thought of moving to a state where weed is decriminalized?

The battle isn't in California or Denver. It's in Memphis. And don't kid yourself by thinking that pot is legal in California, because it isn't. There are all kinds of people getting arrested in California for weed all the time. Pot is not legal anywhere on the face of the earth, not in Colorado and not in Washington, because people are still in prison for using or selling marijuana.

"Decriminalized" is a word that means nothing to me. Decriminalizing means what? Medical marijuana means what? People go to prison and stay in prison over this every day. All of these propositions that are 15 pages long are unnecessary. My proposition is two words — legal pot. That's it. When a pothead is arrested, the pothead is the victim. How can you be the victim and the criminal?

Since you've been out of jail, have you had any other run-ins with the law?

I tried to have one on 4/20 of this year. I went down to the courthouse to smoke, and I had heard from a lawyer friend that they were planning to arrest me for disturbing the peace and disorderly conduct but not for the pot. I'm going to return on April 20th with dealer weight and make them charge me with a felony. It's not that Galileo was such a genius. He just had the balls to stand up during the Inquisition and say "Wait a minute, morons." People don't remember the name of the prosecutor who threw a book down in court to prove that the room wasn't moving, but 500 years from now Galileo's name will remain.

And that's what you hope to achieve with marijuana reform?

Yes, I'm going to be the Galileo of pot. I want to be the Moses of pot and say, let my people go. Or I'm just going to be the random person who just keeps getting thrown in jail and people make fun of, and some day people will figure it out.