Racism is the Existential Horror in Lovecraft Country

One of the subtle jokes in HBO's 2019 Watchmen series comes in the pilot episode. In an alternate version of 2019, Tulsa police chief Judd Crawford is called out of an all-Black production of Oklahoma! when one of his men is shot by a white supremacist terrorist.

Recasting the lily-white musical about love among the Sooners with African-American actors was a subtle dig at Hamilton — an alternate history commenting on the real world's preferred revisionist history. The 2019 where Robert Redford is president for life was, on the surface, much more racially tolerant and liberal than the real 2019, but their biggest problems are still megalomaniacal rich people and racism. 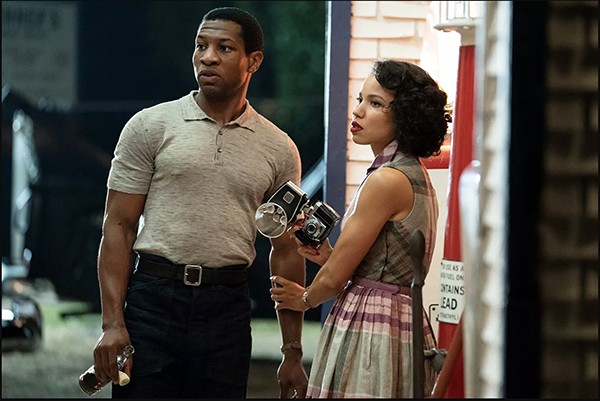 With its masked police and white supremacist conspiracies — and a whopping 26 Emmy nominations — the sequel series to Alan Moore and David Gibbons' landmark graphic novel is enjoying a second life during the pandemic. With no second season in sight (and frankly, none needed), HBO's would-be Watchmen successor is Lovecraft Country. Loosely adapted from a short story collection by science-fiction writer Matt Ruff, Lovecraft Country takes the revisionist scalpel to one of horror's sacred cows.

H.P. Lovecraft's stories from the 1920s are founding documents of modern horror. The villains of Lovecraft's stories are epic monsters like Cthulhu, an "elder god" alien hibernating on the bottom of the ocean, waiting for the moment when the stars align to devour humanity. But the real horror in Lovecraft is our own cosmic insignificance. The return of Cthulhu or the mysterious meteorite that brings a contagious, reality-distorting prismatic phenomenon in "The Colour Out of Space" are simply "natural" forces bigger than us. In the age of climate change and pandemics, Lovecraft's appeal is clear: Everything we have worked for and worried about in our pathetic little lives is subject to being swept away by unfeeling forces beyond our comprehension.

But while Lovecraft may have been a genius and his work remains relevant, he was also, in his personal life and letters, racist as hell. While it's true most privileged white men of his time held racial attitudes that would not pass muster today, Lovecraft wrote a friend that Hitler was "a clown, but God, I like the boy!" Once again, we are faced with the question of the content of the art vs. the character of the artist.

Black sci-fi fan Atticus Freeman (Jonathan Majors) will take the art. The bookish Chicagoan has just returned from serving in the Korean War to search for his disappeared father. But his uncle, George (Courtney B. Vance), won't let him forget the glaring flaws in Lovecraft's character. George is the publisher of a guide for safe Negro travel through pre-civil rights era America. Even though Atticus celebrates leaving "Jim Crow Land" when he rides in the back of the bus from his Army base in Florida across the Illinois border, George knows there are still "sundown towns" all through the Midwest, where Black people are unwelcome, to say the least.

George agrees to take Atticus along on his latest travel writing trip to investigate a mysterious message his father left behind. He was obsessed with finding the secret of Atticus' mother's mysterious parentage. Before he disappeared, he traced the family tree to Ardham, Massachusetts, one letter away from Arkham, the base of Lovecraft's mysterious Cthulhu cult. The third person along on their journey is Leti Lewis (Jurnee Smollett), a childhood friend who has fallen on hard times.

Lovecraft Country's pilot "Sundown" begins strongly enough. Atticus' dreams about his battle experiences in Korea are interrupted by invaders from Mars. As H.G. Wells' tripods spray heat rays across the battlefield, the red Martian princess Dejah Thoris descends from a flying saucer to save him.

The fantastic scene neatly sums up how Atticus finds solace in pulp fantasy. But even as he and his friends find Lovecraft's fantastic creatures in the Massa woods, the real scary monsters are the white supremacist sheriffs who terrorize the Black travelers. The episode's climax traps Atticus and company with their racist oppressors in a Night of the Living Dead-style siege in a cabin in the woods, but not even mutual supernatural threats can overcome their divisions.

"Sundown" is gorgeously shot, and showrunner Misha Green and director Yann Demange conjure some genuinely tense moments, such as a car chase with our heroes trying to beat both the law and the sunset. The series promises a Black, vintage version of The X-Files, with monsters of the week and an overarching Cthulhu cult conspiracy.

While it's hard to judge a series by its pilot (with Watchmen's "It's Summer and We're Running Out of Ice" being the exception that proves the rule), Green and Demange muddy the waters by trying to bite off too many characters and plot threads at once. A pretty but meandering sequence involving Leti's R&B singer sister feels glaringly out of place, for example. Lovecraft Country's revisionist horror has potential, if it can just learn to focus.