Weddings should be a joyous time — a celebration of love between two people, and a joining together of two families. The ceremony and reception bring the community together. It is one of our most enduring rituals.

But let's face it — weddings can also be a stressful time. Emotions are running high. A lot of money is being spent to ensure that everything goes exactly as planned. There's a lot of opportunity for family conflict to spill out into the public sphere. Just because the bride and groom love each other doesn't mean that the new in-laws have anything in common.

Also, there's an outside chance that your newest relatives will try to kill you. 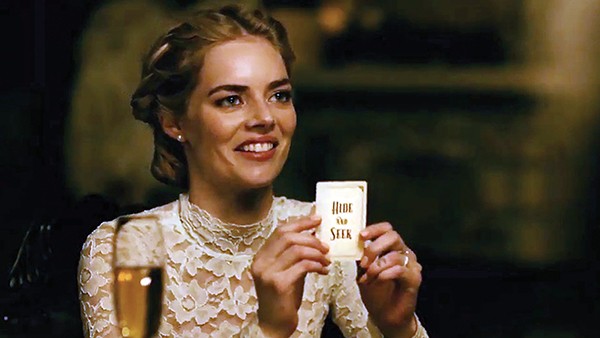 Grace (Samara Weaving) is about to get the wedding of her dreams. Her fiancé Alex (Mark O'Brien) is the scion of the Le Domas family, and they are loaded. We're talking one-percenter rich, with a huge, sprawling family mansion that dates back to the Victorian age. They've got so much filthy lucre you'd think they made a deal with the devil a few generations back.

But Alex doesn't necessarily get along with his family. As Grace and Alex get their courage up for the ceremony, we learn that he hasn't been home in years. They only met 18 months ago, and Grace didn't even know about all the money until recently. The introductions to the Le Domas family have been a little awkward, to say the least. Dowager matriarch Helene (Nicky Guadagni) glares at Grace with a silent, barely contained malevolence. Alex's father Tony (Henry Czerny) openly criticizes his son and new daughter-in-law, and mother Becky (Andie MacDowell) makes only token attempts to defend the new girl in the family. Alex's sister Emilie (Melanie Scrofano) sees the ceremony as yet another excuse to party. Cousin Fitch (Kristian Bruun) sees the whole thing as a tedious inconvenience. No one is thrilled about letting a potential gold digger like Grace get a claim on the family fortune, especially since she and Alex eschewed the usual three-year courtship for an "18-month bone-a-thon." Maybe they should have just eloped.

But no, Grace is determined to get into the family's good graces. So the guests — so, so many guests — arrive, the vows are exchanged, the cake eaten, and the champagne sipped. Things go off without a hitch. Then, just as Grace is getting ready to slip out of her exquisitely tasteful wedding gown and get down to postnuptial coital business, Alex stops her. There's one more wedding tradition to attend to, one the Le Domas family takes even more seriously than the vows. You see, great-grandfather Le Domas made his initial fortune in playing cards before expanding to board games and then, eventually, owning professional sports teams. They're all about playing games and sticking to the rules. After all, that's how they amassed this ungodly fortune. So every time a new spouse is added to the family, she or he must draw a card from a special box. On it will be the name of a game, like tiddlywinks or Parcheesi. Then the assembled Le Domases will play the game together, and the new family member will be officially welcomed into the fold.

But maybe since Grace and Alex saw each other before the ceremony on their wedding day, Grace draws the one bad card in the bunch: hide-and-seek. Grace is given a 100-count to hide somewhere in the sprawling mansion, and then the other family members have until dawn to find her and sacrifice her to Satan.

You don't remember weddings or hide-and-seek going like that? Maybe you were doing them wrong.

Ready or Not is a nasty little bit of exploitation satire in the tradition of Little Shop of Horrors, and I'm frankly surprised at how much I enjoyed it. Once things get rolling, it basically becomes Die Hard in a haunted house. Weaving, whose pretty wedding dress tracks the progression of the plot by becoming more and more torn and blood-stained, carries the picture. Her surly, foul-mouthed asides call to mind Bruce Willis' star-making turn as put-upon policeman John McClane. Like Willis, she plays the whole thing with a little wink to the audience, like when she pauses for a second when she sees a mirror to admire how her ammo bandolier sets off the lace in her wedding dress. The Le Domases are a parade of rich-jerk stereotypes (the fright-wigged Helene gets a laugh when she arms herself with a literal battle axe), and it's lucky for Grace that none of them are very good shots. I guess the rich really are different from you and me — unless, that is, you're a murderous Satanist.