Sure you were good at Street Fighter II in your old teenage mall arcade days, but can you still get that K.O. after a few craft beers?

Beginning this week, fans of retro arcade games will have the chance to brush off their skills at the Rec Room, a new arcade bar inside a warehouse at 3000 Broad Avenue. The venture — spearheaded by a partnership group that includes entrepreneur Taylor Berger and Buckman chemical sales executive Bill Ganus among others — will feature a number of 1980s and '90s arcade games as well as mini-living rooms set up with retro gaming consoles.

"This is about the last 40 years of pop culture. Video games trigger such visceral memories of being a teenager or even younger than that. We have Nintendo Power. We have old [school gym] bleachers where you can sit and have a beer," Berger said. "All of these things trigger these really cool memories." 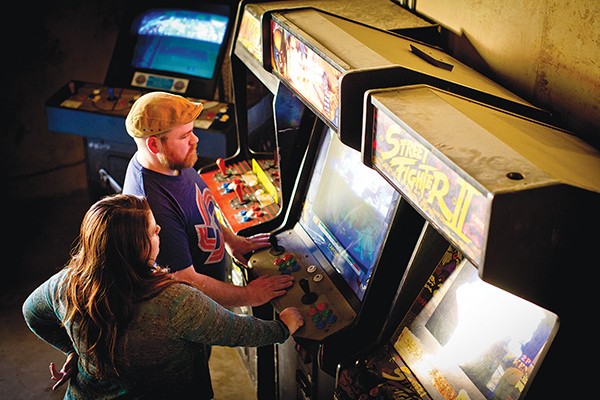 Standing arcade floor games include Pac Man, Street Fighter II, Donkey Kong, Tron, Burger Time, and Road Blasters, among others. But groups can also rent one of six mini-living rooms — complete with couches and chairs — by the hour to play games on gaming consoles. The games, everything from Atari 2600 to Xbox 1 and PlayStation 4, are projected onto a wall.

"We were standing in this 6,000-square-foot warehouse, and we knew it could be an arcade," Ganus said. "But even with the [floor] games in there, you're staring at this huge concrete slab wall. We thought, 'It would be really bad if we projected old-school consoles up on the wall, so your friends could come in, sit on a couch, and play two-player Contra on a 25-foot screen."

Berger said they lucked onto the massive warehouse space because a friend of his is planning to open another business in part of the space.

At first, the bar will serve four rotating styles of beer from Wiseacre Brewing Company, as well as some nationally distributed beers by Sweetwater and Oskar Blues Brewery. The Truck Stop food truck, which debuted at last year's "Untapped" event at the Tennessee Brewery, will be on-site at the Rec Room peddling tacos. Bluff City Biscuits will sell biscuit sandwiches. The bar is open seven days a week, opening at 4 p.m. on week days but earlier on weekends.

"We're opening at 10 a.m. on Saturday and noon on Sunday so people can ride over on the [Shelby Farms] Greenline in the morning, eat and play, and ride home," Berger said.

The bar, near Tillman and Broad, sits on the soon-to-be-constructed Hampline bicycle path, which will run from Overton Park to the Greenline. The partnership group behind the venture, which includes 12 people including Berger and Ganus, is hoping the bar's location near Tillman will help spur revitalization of the eastern side of Broad.

"There's definitely room to expand Broad Avenue, especially as the Hampline is developed. It's made this a really important corridor to connect the High Point area with Overton," Ganus said.

Though the bar-arcade concept isn't new, Berger said the Rec Room is different because it's about transforming an outdated industrial park into something new and fun.

"This ain't no Dave & Buster's. This is a warehouse in Binghampton," Berger said.