Shadow in the Cracks

Arthur Lee was born in Memphis, so we're going to go ahead and claim him, even if he did most of his prolific songwriting with Love in Los Angeles. If you're unfamiliar, Love was one of the best American rock bands of the 1960s, known for their psychedelic rock and politically charged, socially conscious lyrics. Reel to Real was the seventh studio album by Love and features Lee playing with some of the same musicians on the unreleased album Black Beauty.

While it is the last studio album by Love, Reel to Real has never been released on CD until now, or at least until November 27th when the CD version is available for purchase. The songs on Reel to Real feature equal parts psych-rock and Stax-oriented soul, and the CD reissue comes with a 32-page booklet that includes an essay by Rolling Stone's David Fricke. Reel to Real isn't exactly classic Love, but it is an interesting part of Lee's discography and perhaps gives the listener a hint as to what the re-imagined Love would have sounded like (the one that featured Memphis musicians Jack Oblivian and Alicja Trout) had the band ever recorded. Reel to Real is pretty much a must-have for any fan of Lee and features 13 bonus tracks of alternate mixes and studio rehearsals.

Favorite Song: "Which Witch Is Which" 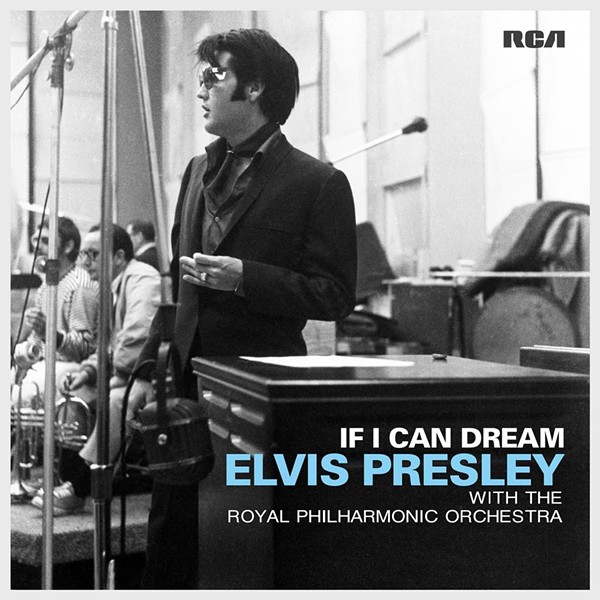 Released late last month on Sony Music's Legacy Recordings, If I Can Dream is the orchestral Elvis album you've been waiting for. The album features classic Elvis vocal performances with brand new orchestral accompaniment, along with appearances by Michael Bublé, Il Volo, and Duane Eddy. Recorded at Abbey Road Studios by producers Don Reedman and Nick Patrick, If I Can Dream features 14 classic Elvis songs like "Love Me Tender," "Can't Help Falling in Love," and "In the Ghetto." If I Can Dream is part of the ongoing Elvis 80th birthday celebration of 2015, along with other Elvis projects, including the launch of the largest Elvis retrospective ever mounted in Europe: "Direct From Graceland: Elvis at the 02." If I Can Dream is the perfect album for the holidays, with the vinyl version coming as a double LP.

Favorite song: "And the Grass Won't Pay No Mind"

Last year, Goner Records introduced America to Ausmuteants, an Australian synth-punk band that had been gaining steady momentum in Australia and Europe. After releasing two albums for Ausmuteants, Goner seemingly discovered Hierophants, another synth band featuring Ausmuteants' de facto leader Jake Robertson. Hierophants claim that their music is the aural equivalent of throwing your calculator into the ocean, but that really doesn't make any sense, so let's dissect a little bit further. After digesting Parallax Error, I found that I liked the collection of cleverly written synth-pop songs. Unlike the Ausmuteants tracks that sometimes sound like they are going to fall apart at any moment, everything on Parallax Error is calculated, with no room for leftover noise. Mostly Hierophants remind me of a repackaged, Australian version of hardcore-era Devo, with short, two-minute songs for the easily distracted modern mind.

Recorded all over Memphis at studios of old like BR Toad (best name ever?) and Easley-McCain Recording, Nightime is a collection of old and new Amy G. Starks songs, the singer most known as an integral part of the first Memphis punk band, the Klitz. The title track is a Big Star cover, and Nightime also features Starks covering "Brown Sugar" (Rolling Stones), "Call Me" (Tony Hatch), and "Let's Make Love" (Aaron Hall), with most of the songs coming from a recording session at Easley-McCain that took place in 1982 and 1983. The Klitz's mighty cover of the Rolling Stones' "Brown Sugar" is thrown in for good measure. "Nowhere Near," the only new song on the album, comes in the form of a collaboration with Kip Uhlhorn of Cloudland Canyon. Ross Johnson, Jim Dickinson, Doug Easley, and Jim Spake are also all over this album, making it a pretty interesting release from a group of musicians and producers who have been shaping the Memphis music scene for years. Socialscenerecords is a new label started by Stephen Burns of the Scruffs, and hopefully more archival releases from Memphis artists are in store.

Shadow in the Cracks is the project of Jim and Mike Blaha of the Blind Shake, the band that released Breakfast of Failures on Goner Records last year. While the Blind Shake's music seems written exclusively for the live setting, the tracks on the debut album by Shadow in the Cracks sound like they were perfected with the help of some studio magic, although the band did put on a great performance at Gonerfest 12 this past September. There are equal parts lo-fi psych-rock and kraut-rock minimalism running through this self-titled debut from the Minneapolis-based band, and it plays like a cohesive album, making the fact that it was written in two months and recorded in two days that much more impressive. Another win for the Blaha brothers, who show no signs of slowing down anytime soon.