Jennifer Lawrence ’s spy thriller is 2018’s second-best film named for a color and an animal.

Since around August 1991, there's been something missing from American films: A good stock villain. That's when the Russian Communist Party ceased to exist, the Soviet Union dissolved, and the Cold War, a nebulous conflict without a clear start date, officially came to an end. Millions around the globe who had lived their entire lives under the specter of nuclear annihilation breathed a sigh of relief. Freedom, democracy, and capitalism stood triumphant. But action and spy movies never recovered.

The Russians had been such good villains for us, the yang to our yin. The Soviets of movie lore were just as capable and well funded as their Western counterparts, but their fanatical adherence to an ideology we only half understood made them much more ruthless. Where would James Bond be without From Russia With Love? Rotting away in some flea-bitten colonial capital, keeping the locals subdued for the Queen, probably. The Russian threat, even dressed up as SPECTRE, gave him purpose and meaning. In the post-Cold War period, Bond would fight international criminal cartels and terrorists, but it just wasn't the same. Nobody had that bad guy zing like the Russkies.

Well I've got good news for fans of international intrigue and the possibility of death by cleansing nuclear fire! The Russians are back! And this time they're sexier than ever! We're talking Jennifer Lawrence sexy here, people. Lawrence, fresh from dumping Darren Aronofsky because he Would. Not. Shut. Up. about their arthouse embarrassment mother!, plays Dominika Egrova, a made-up name for a Bolshoi ballerina if ever I heard one. Dominika is nearing the peak of a promising career on Moscow's biggest stage when a gruesome injury throws her life into ruins. Her father is dead, her mother is an invalid, and, as anyone who has recently watched I, Tonya could tell you, there's not much of a job market for hobbled ballerinas. That's when her uncle, Ivan Dimitrevich Egorov (Matthias Schoenaerts) makes her an offer she can't refuse. 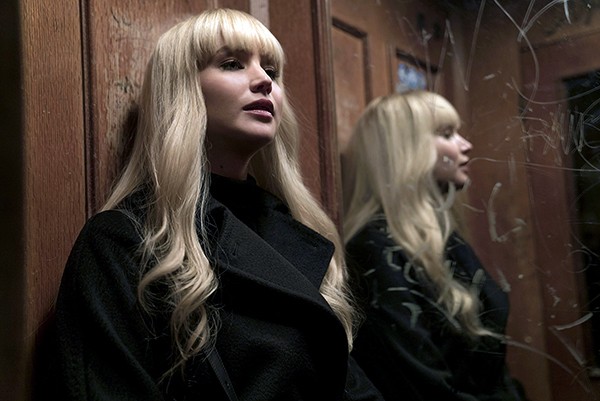 Let me pause here to say I love the character of Ivan, and not just because he has the laziest possible made-up name for a Russian bad guy. Everything about Schoenaerts as Ivan is designed to push your Bond movie buttons. If this were 1963, he would be working for the KGB. As it is, he works for the SVR. Even his haircut and the impeccable tailoring of his suits resemble Red Grant, Bond's nemesis in From Russia With Love.

If Schoenaerts is Red Grant, then Charlotte Rampling is Krebs, the matronly SPECTRE agent with the switchblade shoe. Rampling is even called "Matron" by the collection of would-be super spies in the notorious school where Dominika is sent to learn her trade craft, which consists mostly of picking locks and being very sexy. "The Cold War did not end!" she exclaims, before making Dominika and a tovarisch date raper with the completely authentic name Dimitri Ustinov (Kristof Konrad) strip and get it on for the class.

Dominika doesn't spend long at spy school, as she quickly grows too ruthless and edgy even for the Cold War relics in charge. She's sent into the field to root out a mole by seducing CIA agent Nate Nash (Joel Edgerton), whose name is totally not just made up to sound cool. Thus begins round after round of double, triple, and quadruple crosses with a salchow twist. Everybody betrays everyone else, and plots too complex to even follow if you're taking notes (I was) pile up like leaves falling in Gorky Park.

Here's the thing about Red Sparrow. It's completely ridiculous, way too long, and yet also, somehow entertaining. A lot of that probably comes down to Lawrence, who pretty much just brazens her way through the proceedings with her movie star's physical confidence. Lawrence earns her paycheck, which, given the nude scenes, must have been substantial. And really, isn't elevating mediocre material by sheer charisma pretty much the job description of a movie star? Lawrence's accent never stabilizes, but her lock jaw inscrutability takes inspiration from Best Actress winner Frances McDormand as her eyes whisper "Zees men are pigs. I vill control zem."

I can't help but think Red Sparrow works as well as it did for me because I watched it right after reading The New Yorker's extended exegesis of the Steele Dossier. It may make for an eye rolling film plot, but blinding powerful men with boobies and then blackmailing the hell out of them apparently works like a charm. Just look around.