Rev. John Wilkins Reflects on his Many Decades of Gospel and Blues.

Hunter's Chapel in Como, Mississippi, has venerable links to the blues community. Not only did the legendary Fred McDowell attend services there, he recorded his 1969 album Amazing Grace with the church's choir. And it was fife and drum master Othar Turner's church of choice. So it's rather fitting that the resident pastor is the Rev. John Wilkins, an heir to blues blessings in his own right.

To Wilkins, there's no contradiction between the blues and gospel. "People got to realize I listen to blues," he says in liner notes for an upcoming new album. "That ain't gonna send me to hell — the way I live is what's gonna send me to hell." And that has long been his credo, perhaps to his late mother's dismay. "Son, you can't play both of 'em," she told him. "Just pick one to play." By that time, he'd already been mixing them up.

He learned music from his father, Robert Wilkins. By the time Robert became an ordained minister in the late 1930s, he had already recorded blues for the Victor, Brunswick and Vocalion labels. In the 1960s, while still a preacher, the elder Wilkins recut one of those early tracks, "That's No Way to Get Along," as the more sanctified "Prodigal Son," a song made famous by the Rolling Stones. 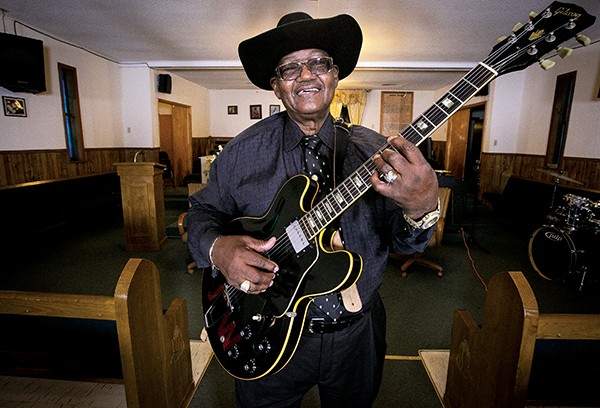 I asked Wilkins the younger if that led to any royalty checks. "Oh yeah, we still get 'em. After daddy passed, mama was getting 'em. And after mother passed, it was split between the children." But by the time the Stones' record came out, young John, growing up in Memphis, had already inherited a far greater reward: his father's musical acumen.

"I started on one of them little toy plastic guitars," he recalls. "And I kept watching daddy. That's a gift from the good Lord." He was soon immersed in the hopping Memphis music scene of the 1950s and 1960s. "I grew up playing with gospel groups there. Old Man 'Bless My Bones' Wade at WDIA. Any time a group would come from out of town, if they didn't have a musician, he would recommend me to play for 'em. I had to play for a lot of groups while they was in town."

He also rubbed shoulders with the era's classic soul singers. "I played a little bit with James Carr. And I played lead guitar on 'You Gonna Make Me Cry' with O.V. Wright. That's the only one I did with him." By then, he was also exploring a more profane world.

"I was playing the gospel until I got to be about 18 years old. And then I started going to Mississippi country 'tonks and playing the blues on Saturday, come on back and play the gospel on Sunday." He would also play with blues luminaries in Memphis. "I got a chance to play with Fred McDowell, when my daddy played at the shell in Overton Park. I played upright bass guitar for him. And I used to play lead guitar with Memphis Minnie Downtown, back in the alleys and different places."

That all changed in 1985, when Wilkins settled in at Hunter's Chapel and quit guitar entirely. "I pastored there and had one blues singer that still belonged there, Othar Lee Turner. A lot of people come from overseas to his funeral, 'cause he had played everywhere, you know. And after the funeral was over, they saw my name on the program and said, 'Hey, did you know a man by the name of Robert Wilkins?' And that's where I got started again. That was about 2003. And by 2008, I was in London."

The international acclaim keeps building. For our interview, Wilkins phoned from Paris, between sound-checks for shows there, before he returns to kick off the Juke Joint Festival in Clarksdale, Mississippi, this week. And, contrary to his mother's advice, he keeps mixing it up. "I get a little stinky. I call it stinky beat, you know. That blues beat. And I've had a lot of people at them blues shows, starting to shout with beer cans in their hand! They tell me, 'Reverend Sir, I haven't been to church since I don't know when, and I'm going Sunday.' So that makes me feel good."