Mistress America is director Noah Baumbach's second film released this year. The first, While We're Young, was a modest hit that starred Ben Stiller and Naomi Watts as filmmakers caught between the legacy of their parents' and, as James Murphy says, "The kids coming up from behind." Stiller finds himself invigorated when he befriends a younger documentarian, played by Adam Driver, but their friendship ultimately curdles into jealousy and mistrust as Stiller sees the more unpleasant aspects of his personality reflected in Driver's characters' ambitious nature.

Mistress America is the female version of While We're Young. Tracy (Lola Kirke) is an 18-year-old college freshman who has just moved to New York to attend Barnard. But her first few weeks of school are filled with awkwardness and rejection. She's an aspiring writer but doesn't get accepted to the Mobius Literary Society. The guy she's kind of into, Tony (Michael Shear), has another girl. And her mother is getting married to a guy she barely knows and asks her to meet her new stepsister-to-be, Brooke (Greta Gerwig). 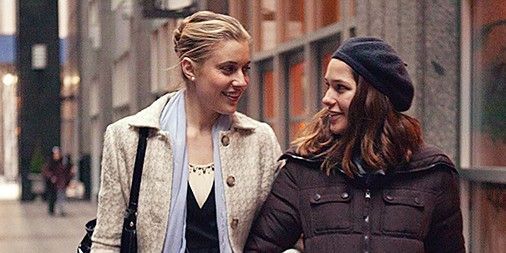 Brooke is a whirlwind of a person who seems to know where all the cool parties are in Manhattan; a self-starter who taught herself the word "autodidact"; a spin class instructor; and a tutor whose advice to a struggling algebra student is "X doesn't roll like that, because X can't be pinned down." What she really wants to be is a restauranteur. She's planning on opening a restaurant called Mom's that will be a community center and eatery where she'll "keep the hearth."

Tracy is entranced by Brooke, and the pair fall into an intense relationship. When one of Brooke's investors pulls out of the restaurant over an ill-timed Instagram picture, Tracey convinces Tony to let them use his car to drive to Greenwich, Connecticut to convince a pair of Brooke's friends, Dylan (Michael Chernus) and Mamie-Claire (Heather Lind), to partner with Brooke. The trip descends into fiasco and puts a strain on their relationship.

The center of Mistress America is Gerwig, who came up from the indie scene after turning heads in 2007's Hannah Takes the Stairs. Gerwig, also the film's co-writer, has an electrifying screen presence that she and Baumbach put to good use in their first collaboration, 2012's Frances Ha, where she was the uncertain young woman trying to fit in. But in this film, Brooke is the spirit of New York personified, always looking to the next hustle, living for the future while ignoring the more squalid aspects of her present life. Brooke seems like what Frances would have grown into, and I think it's a missed opportunity to not make Mistress America a sequel to Frances Ha, as that would have given the character more depth.

Gerwig is her usual bright self. The big discovery in this film is Kirke. Kirke skillfully draws Tracy's emotional arc, from intimidated college girl to confident young writer. She gives herself over to Gerwig's deadpan dialog, nailing lines like: "That's cool about the frozen yogurt machine. Everyone I love dies."

The other great turn is by Lind whose character struck it rich and moved to the exurbs. Once the action moves to Connecticut, it becomes a chamber comedy for a while. Brooke and Tracy navigate an unfamiliar social world, while Mamie-Claire tries to keep her husband from blowing money on the restaurant.

Like Woody Allen in the 1970s, Baumbach's films tend to revolve around the well-to-do in New York, shooting thick, witty dialog and gags like an art movie. Like Allen, his characters can sometimes be grating and blinkered. But Mistress America powers through the occasional rough spots on Gerwig's determination, unlike her character, not to take it all too seriously.