Rhodes Scholar: The College That Made Amy Coney Barrett

I came to Rhodes in the fall of 1989, a time of great change in America. After two Ronald Reagan landslides and the election of George H. W. Bush, the conservative revolution was in full swing. Generation X, as we would come to be called, grew up in the shadow of the Cold War. I was in a political science class when we got word that the Berlin Wall had fallen, making our textbooks instantly obsolete. 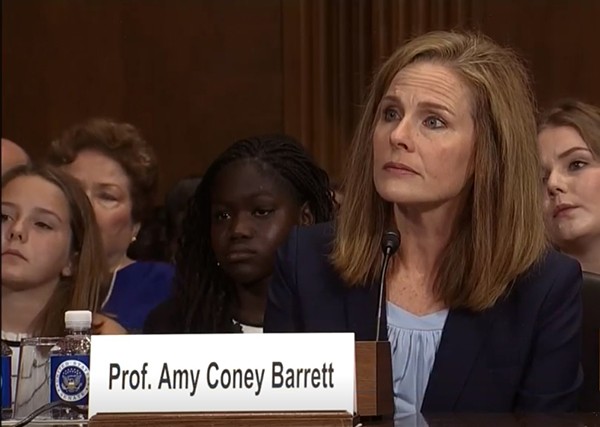 In the 1970s, when Rhodes was called Southwestern, the student body had a hippie reputation. In the 1990s, things were different. The college's president, James Daughdrill, was involved in a push to eliminate the term "liberal arts college" because it contained the word "liberal." This was a place where the Kappa Alpha fraternity dressed up as Confederate soldiers to throw an annual "Old South" party. Meanwhile, the biggest band on campus — Neighborhood Texture Jam — sang "Wanna see the rebel flags?/Wanna go see 'em?/They're next to the swastikas/In a museum!"

The divisions on campus presaged the divisions of today, starting with class. Rhodes is an expensive, selective college. Many Memphians think of Rhodes students as a bunch of stuck-up rich kids, but that's not entirely true. If you qualify academically, the school is generous with need-based financial aid. As a working-class kid from a rural Tennessee public school, I had never been around such wealth and privilege. The student body was mostly white, but it was much more diverse than where I grew up. Reading Toni Morrison in a literature class with the first Black teacher I ever had was an eye-opening experience.

The most important course I ever took was called Global Change. Only three years after NASA climate scientist James Hansen's testimony before Al Gore's Senate committee, we were creating models of the Earth's climate in Rhodes' computer lab. Watching my carefully balanced simulation go haywire after adding a little extra CO2 to the atmosphere taught me the precariousness of life on Earth.

The 1980s saw the emergence of the AIDS epidemic, which Reagan's conservative administration had ignored because it mostly affected gay people. By the early 1990s, it was obvious that using condoms could stop the spread of AIDS, yet Daughdrill's conservative Rhodes administration forbade student groups from distributing them. Some of my friends, including Ashley Coffield, the current CEO of Planned Parenthood of Tennessee and North Mississippi, took to the weekend party circuit toting buckets of free condoms camouflaged by a layer of candy on top.

Like Amy Coney Barrett, I was an English major. I am sure we had classes together, but I don't remember her. Those who do remember her describe her as quiet and studious. Rhodes was a competitive environment. People could be jealous and petty; I used to say the most popular intramural sport was character assassination. If she had been a monster, we would know it by now.

Producing a second Supreme Court Justice (after Abe Fortas in 1965) would increase Rhodes' prestige. But I was one of more than 1,500 alumni to sign a letter opposing Barrett's nomination. My reasons are rooted in the education I received on North Parkway.

In her Senate hearing, Barrett, whose father was an oil company lawyer, refused to admit climate change is real, saying, "I'm not a scientist." That alone is disqualifying for someone whose decisions have the potential to affect the fate of civilization.

As a freelance writer, I depend on the Affordable Care Act. The Trump administration, having failed to legislatively strip 20 million people of healthcare, is currently suing to have the ACA declared unconstitutional. It will be one of the first cases Barrett hears on the Supreme Court. Trump wouldn't have nominated her if he thought she would rule against him.

Her record indicates that her attitudes toward a woman's right to choose and same-sex marriage have the potential to gut Americans' individual liberties. And finally, accepting this nomination against the dying wish of Justice Ruth Bader Ginsburg, from an impeached president who is openly threatening the rule of law, is unworthy of someone who signed the Rhodes Honor Code.

Barrett has put her personal ambition over the needs of the nation, and I fear her appointment to the highest court of the land will be a permanent stain on the honor of the college that I hold dear.

Chris McCoy is the Flyer's film and TV editor.