Why would two doctors want to start a record label? Ask Dennis Black and Robert Wyatt of Black & Wyatt Records, and they'll tell you it's because they love Memphis music.

Black is a pediatric gastroenterologist, and Wyatt is a pediatric nephrologist. They met through their work at Le Bonheur Children's Hospital and bonded over their love of music, particularly Memphis rock-and-roll.

Wyatt says even though he's lived and practiced medicine in Memphis since the 1980s, for many years he was unaware of the city's fertile underground music scene. "When I had a division to run, a research lab, and a family to raise, I missed out. My lab techs were going to the Antenna Club, but I never did." 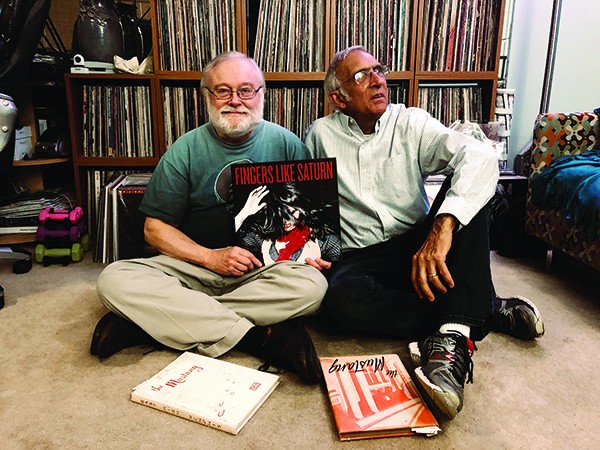 Black grew up in Covington and worked at the town's radio station, WKBL, in high school, then for Memphis State's WTGR "Music has kind of been my hobby all along," he says. "Unfortunately, I can't really play. But I like hearing live music, and I have a good record collection."

"About the time $5 Cover came out, I started paying attention to Memphis bands and meeting Memphis musicians," Wyatt says.

After he got to know several Memphis musicians through the cleaning company, Two Chicks and a Broom ("Valerie June cleaned our house for a fairly long period of time."), he started hiring bands to play for yard parties at his home in 2012. The Harbert Avenue Porch Show has since attracted Jack Oblivian, the River City Tanlines, Snowglobe, and James and the Ultrasounds, to name a few.

"He's his own little institution, with the porch shows," says filmmaker Mike McCarthy, a Memphis punk pioneer whose daughter Hanna Star was also featured in a porch show. "Mike approached me about wanting to put the Fingers Like Saturn album out," says Wyatt. Fingers Like Saturn was a band McCarthy formed to feature Cori Dials (now Cori Mattice), a singer and actress he met while working at Sun Studios in 2006. He saw Mattice sing with her band the Splints. "They were good, but she looked like a Chrissie Hynde/Debbie Harry figure — lost in time, full of charisma."

"I introduced Cori to this group of talented eccentrics," says McCarthy. "She jumped right into it."

The band recorded at Sun Studios and at Selvidge's home studio. "I've always played in punk bands, but I wanted this band to be a well-produced glam-rock band," says McCarthy.

Filled with Memphis heavy hitters and held together with Mattice's powerful alto, the glam influence is palpable, especially in songs like the Bowie-worshipping "Glam Lies." But, since it's Memphis, the sounds are more eccentric. "Satin (Pine Box Lullaby)" dabbles in Mexicalia by way of Johnny Cash. "Black Ray of Sunshine," a ballad about the Black Dahlia, is an early example of the string-arranging skills that have made Kirkscey a sought-after soundtrack composer.

Before the eponymous record could find a label, Mattice's career took her out of Memphis, and the band drifted apart. Ten years later, McCarthy played the recordings for Black and Wyatt. "We listened to the recordings, and they were really good!" says Black. "It was just a conspiracy of events that it didn't get a wide release at the time. If we were going to do it, we decided to make it a really nice record."

Fingers Like Saturn will reunite at DKDC on October 24th for Black & Wyatt's first record release party. But the label-mates are already looking forward to their next release: a single by the Heathens, a Memphis high school garage band that recorded at Sun Studios in 1956. Black and Wyatt plan to continue releasing a mixture of contemporary Memphis acts and lost gems from the 60-year history of Memphis rock.

"We're not in it to become millionaires," says Black. "We have our day jobs. We want to get the music out there."