The animator behind Yellow Submarine comes to Memphis

Ron Campbell A scene from Yellow Submarine (1968), the British animated film based on music by the Beatles and illustrated in part by Ron Campbell.

If you're into the Beatles or you've enjoyed watching cartoons at any point over the past 50 years, chances are you are already a fan of Ron Campbell's work. The Australian animator has worked on memorable cartoons like The Jetsons, Rugrats, Scooby-Doo, The Flintstones, and The Smurfs, in addition to directing the wildy-popular The Beatles Saturday morning cartoon show that aired in the 1960s. After moving to the United States, Campbell was asked to contribute to the Beatles film Yellow Submarine, a job that would define his work as an animator. I caught up with Campbell to find out about his life in the cartoon business and to learn more about his upcoming art show this weekend at Art Village Gallery.

Flyer: What was your first paying gig as a television animator?

Ron Campbell: I got a job at a small animation studio in Sydney, Australia, after college. Television came to Australia in 1956, and I graduated art college in 1958. There was only one animation studio in Sydney, so I knocked on the door and I said, "You have to hire me." They said they didn't have enough work, so I waited about four days and came back and said, "I need to work here, and you have to hire me." I did that about half a dozen times before they finally had enough work and hired me.

I sat at a handmade animation desk, and my job was to work on commercials for bug spray. I had the only real scene in the commercial, and it was of a spray can coming out and spraying a 100-leg centipede. I had to do 100 drawings each, and I remember sitting there as a young man thinking, I would pay them to let me do this, but I better not tell them that.

Did The Beatles television show you directed just lead into your doing the animation for Yellow Submarine?

The Beatles television show became a huge success and enabled me to get job offers in Hollywood, so I moved to America with my wife and first child and started working for Bill Hanna of Hanna-Barbera. I left there after a while and started working on my shows, like Scooby-Doo and George of the Jungle, when I got a call from London asking me to help out on the production and animation of Yellow Submarine. The movie had a huge budget problem, and they were having issues with the animation, so I agreed to help out with about 12 minutes of animation of the submarine and the scenes with the big Blue Meanies. I would draw something up and then send my pencil drawings back to London. The scenes were sent to me, and I would bring them to life with animation. But with The Beatles TV show, I was responsible for directing and hiring people. The work I did for Yellow Submarine accounts for 12 minutes of the film, but it took eight months to complete.

With so many cartoon illustration jobs under your belt, which ones were your favorites? Which jobs stick out as unique?

The show that I produced in the '70s called Big Blue Marble is probably the one I'm the most proud of. It was an international show, and we sent it to over 100 countries. It featured a lot of live action, but my studio produced all the animation. We won a Peabody and an Emmy for that show, and you might be able to find some of it on the Internet. I don't see any show as a favorite, though. I love them all. How can you choose between Smurfette and Angelica from Rugrats? I love Scooby-Doo, Fred Flintstone, George Jetson. I love them all. 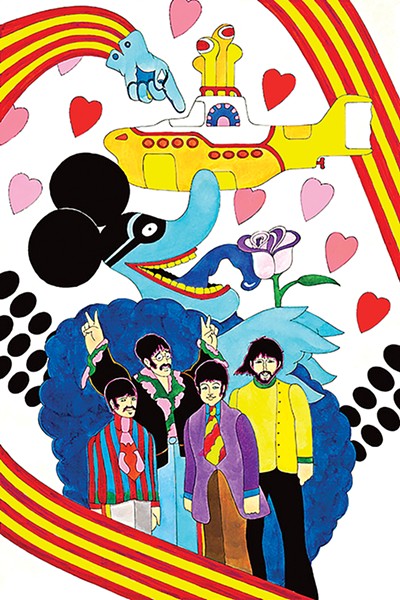 Now that you are retired, how often are you able to travel for art shows?

I guess I do an art show or two every month, sometimes less and sometimes they jam up together. I obviously need to spend a lot of time at home painting, but one of the pleasures that I get out of doing a show is meeting the audience. When I was working in animation, all the audience to us was a ratings number on the page. Now, people will come up to me and say, "You represented a lot of my childhood." The memories that stay with the audience for the rest of their lives really surprise me. Popular culture is enormously powerful, and that's something I've learned since I retired and started meeting my audience.

Being in the industry for 50 years, what kind of changes did you see?

I didn't really experience any major changes, but I saw them coming. The first computer-generated animation I ever saw was in 1968. Computer technology was used in feature films while I was primarily working on television, but now it's become the only way to make animation. I did my part, I worked in a different era, and the world rotated on its axis, and time went by. Young people are doing everything on a computer now, and I'm the dinosaur holding a pencil. I saw the technology come, but no doubt in 50 years young people will see another major change because that's just how the world works.