That's right, kids, everyone around the world is doing the "Rona Pollona." 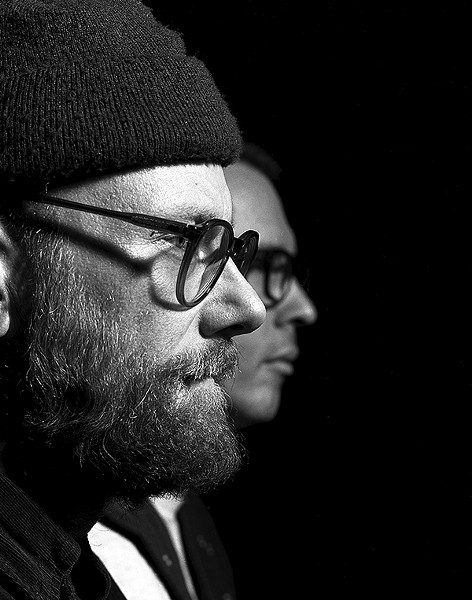 The track's feel is both troubling, given the subject matter, and reassuring, given the groove's roots in the transformative days of the '90s. There's something about its blend of the familiar and the uncanny that fits the present moment. And should you harken back to the '90s on hearing it, you wouldn't be far from the truth, for the voice is none other than Soul Coughing's Mike Doughty. Like most of us, he left the '90s behind him around the year 2000, but lately he's been revisiting approaches he hammered out with his famed group a quarter century ago.

"I had just been getting into Soul Coughing sounds again," he tells me. "There's the old Scarface Beats and Breaks CD, which I think was completely against the law in the '90s when it came out. It had Funky Drummer and all the famous breakbeats, completely pirated." Revisiting that gold mine, he took the beats, "and just started looping them. I also started working with samples again. Working with the sampler's really like an instrument, as opposed to just having loops and stuff, really triggering sounds like the Mellotron, that kind of a vibe."

This was happening even before Doughty toured in 2019 with a live band in celebration of the 25th anniversary of Soul Coughing's Ruby Vroom album, but that tour reinforced the new/old direction Doughty was headed. And so, though the players are different and the word flow is more contemporary, he's dubbed his latest group, Ghost of Vroom. "Rona Pollona" and two other titles will drop this Friday on Ghost of Vroom's debut EP.

One thing that makes these new sounds snap and pop is that they're very much played by a live band. After Doughty began assembling tracks with classic '90s loops, he then added the live players, including his collaborator of 15 years, Andrew "Scrap" Livingston. "He auditioned as a bass player," recalls Doughty, "but he just happens to be a cellist, a guitarist, and a keyboardist." Lil Pepper plays live drums throughout, and some local players bring some grit and grind to the proceedings.

"One of the major distinguishing factors about this EP is that Logan Hanna plays guitar on it," observes Doughty. One listen to the track "Chief of Police" and it's clear; Hanna's bursts of lead guitar fury make it a truly badass throwdown.

"Oh, and Victor Sawyer plays trombone on 'Rona Pollona.' He did it in my backyard. I was like, 20 feet from him, with the mic on a picnic table."

Other Memphians make an appearance, but you probably won't recognize them. "I assembled banks of samples using a bunch of Memphis singers," Doughty explains. "Raneem Imam came in and sang things like 'oooOOOOP!' I got about 20 of those from her. Bailey Bigger's on there. William McLain, an opera singer. And PreauXX from Unapologetic."

Contrarians and surrealists in the listening public will be delighted to know that this, the band's debut EP, is officially known as Ghost of Vroom 2. Before the quarantine era, Doughty and a different group of players made an album with Mario Caldato Jr., onetime Beastie Boys producer. Look for that to drop when touring becomes viable again. Until then, embrace the absurdity of "Rona Pollona" and a debut that's a part two.

Doughty explains it matter of factly. "I live in that kind of vibe. I'm extremely happy that Ghost of Vroom 2 is coming out before Ghost of Vroom 1. This is our second release. It's just that the first release has not been released."