Room In the Inn Launches Fifth Season In Memphis

Program encourages churches to act as homeless shelters in winter.

The fifth season of Room In the Inn (RITI)-Memphis began Saturday night, November 1st, just in the nick of time, with overnight low temperatures hovering one degree above freezing.

RITI-Memphis was inspired by Nashville's RITI program, where homeless guests are invited to sleep in churches, synagogues, and other worship centers during cold winter months. Each site hosts approximately 12 guests for one night each week from November through March. Ten Memphis congregations are participating this winter, and the number of nights when beds are available has doubled from three nights last year to six nights this year.

In Memphis, guests can sign up for RITI at Manna House in Midtown on Monday, Tuesday, and Thursday mornings. They reconvene at Manna House in the evening and are driven to a church for a hot, communal meal and a safe, warm place to sleep.

The Rev. Lisa Anderson, pastor of Colonial Cumberland Presbyterian Church in East Memphis and director of RITI-Memphis, brought the program to Memphis after spending a day with Nashville's RITI, which just started its 29th season and has more than 180 places of worship hosting guests each week.

"We saw what they were doing, and what a perfect idea priest Charles Strobel [founder of Nashville RITI] had," she said. "I thought, 'We could do this at our church.'"

Anderson brought the idea before her congregation, and they agreed to try it.

"For the first two-and-a-half years, it was just an outreach of our church. Then other people found out about it, and we had more volunteers than we could use," Anderson said. "So, we created a non-profit and began recruiting other congregations two years ago."

RITI stands out from other emergency shelter options in Memphis. Unlike Memphis' large shelters, where guests not enrolled in drug recovery programs usually have to pay a fee, shelter with RITI is always free.

"Other large shelters are necessary because there are so many people to serve, but we feel that especially in the winter, people should have a space to stay for free," Anderson said. 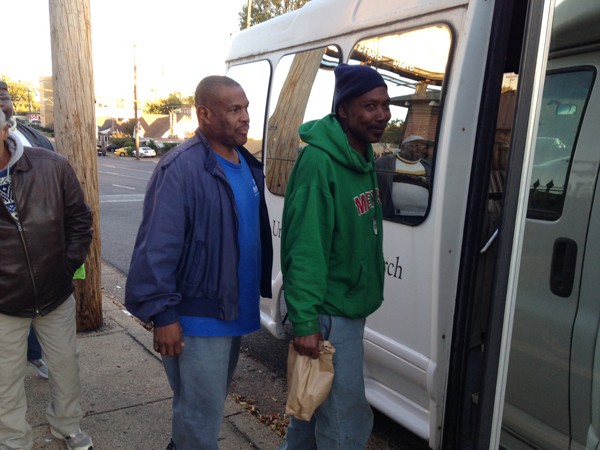 Another, non-tangible aspect of RITI makes it unique.

"The spirit of hospitality is really what is different about Room In the Inn," Anderson said. "Guests are invited to stay in small groups. It is safer because of the small numbers, and it is more relational because of the small numbers. It presents opportunities for real conversation, real relationships. Guests feel welcome, and the meal is communal. It's about being together and creating a place of sanctuary."

Manna House currently serves as the meeting location for RITI, but Anderson said First United Methodist Church downtown recently offered them the use of one of their buildings. RITI is planning to partner with two other ministries, Iona Community of Faith and Urban Bicycle Food Ministry, to create The Carpenter's House, which will be a space for daytime hospitality, feeding ministries, and social services, as well as volunteer training, pickup, and drop-off for RITI in the winter.

"We hope that being downtown will help us reach more of the downtown homeless population who sometimes don't come this far east [to Manna House]," Anderson said. "We have big dreams for the space, but right now, we're just trying to get in there. We're hoping to be able to do something with it by January."

The guests of RITI speak highly of the program. One woman named Gloria said, "The first time I ever attended a shelter was when [RITI] opened its doors. I had heard such bad things about other shelters." She described her experience with RITI as "pleasant, loving, and compassionate."

A guest named J.J. said, "It's a pleasant experience for a stranger."

But a man named Jermaine got straight to the point, saying the best thing about RITI is that "you're not out in the cold."

Anderson says churches have been slow to commit to RITI, mainly because of stigmas about homeless people. But she said in all four years, they have had no issues with violence or safety.

"There are more than 2,000 churches in Memphis, and they are all heated, empty, and locked up at night," Anderson said.