A Room worth a view

A lot of things happen when you grow up, but one of the most important is a widening of your point of view. That's the major theme of Room, the remarkable new film by Irish director Lenny Abrahamson — although at first glance, it might not be obvious. But the pleasures of Room (not to be confused with The Room, the so-bad-it's-good cult hit by Tommy Wiseau) aren't dependent on immediately grasping the deeper meaning. It's an extraordinarily well-crafted indie film that shows what is possible with a limited budget, a good screenplay, and a clear vision.

The point of view that gets expanded in Room belongs to Jack (Jacob Tremblay), a 5-year-old boy who starts the film with a long, luxurious head of hair that would be the envy of a L'Oréal model. His hair is so long because he has been trapped in a single room with his mother Joy Newsome (Brie Larson) for the entirety of his short life. It is also, like Samson, the source of his "strong."

The room Joy and Jack share is tiny and squalid, with an open toilet set next to a sink, and only a tiny TV for entertainment. But mother and son have carved out a simple existence that is, if not happy, at least content in each other's company. Despite their isolation, Jack has learned to speak and evolved a fairly consistent worldview. Because there is only one of everything, there is not much need for articles such as "the" and "a," so "door" refers to the only door he's ever known, the thick, steel one with the number pad-operated lock that keeps him from finding out about the outside world. He knows that "TV people are flat and made of colors," a little Zen koan containing hidden wisdom if ever I heard one. But he's not too clear on just what goes on beyond the sole skylight in Room's ceiling, or what happens when Joy's captor Old Nick comes to visit, and he is forced to spend the night in the tiny closet. But from the sounds his mother makes, it's not good. 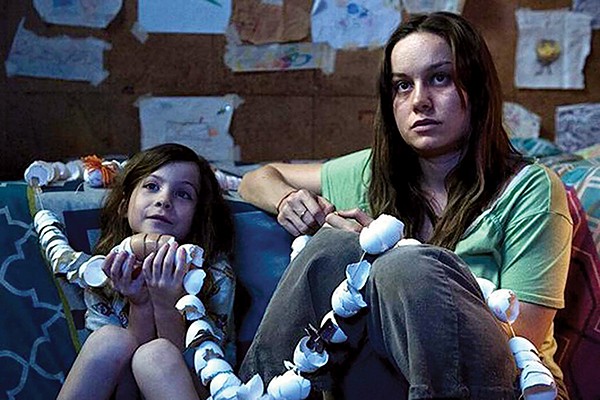 I went into Room knowing basically nothing about it — a strategy I find increases my engagement with the many movies I review — and I found the slow revelation of the facts of Joy and Jack's imprisonment in Room extremely rewarding. Knowing how to dole out information at exactly the right pace is one of the hardest skills to learn for a director. Hitchcock was a master at it, as you can tell from watching Strangers on a Train, to cite just one example. Abrahamson's clearly been studying Hitch, and I don't want to spoil his hard work by revealing too much plot detail here. Suffice it to say that Jack and Joy do finally find their way into the outside world, where they find much greater challenges than mere survival.

Given the hermetic nature of the first hour or so of Room, its success depends solely on the performances of its two leads. Larson is more than up to the challenge. She was most recently seen as Amy Schumer's uptight, judgmental sister in Trainwreck, but the depth of her performance here has only been hinted at in her previous work, including her starmaking turn in Short Term 12. We follow Joy from maternal happiness to grim determination to exultant freedom and on into existential despair, and it all plays out on Larson's subtle, expressive face. Equally impressive is Jacob Tremblay, who gives the kind of unself-aware performance as Jack that most older actors can only dream of. I can only imagine the depth of the collaboration between Larson and director Abrahamson that put this 9-year-old into the proper headspace to create such a rich character. I expect to see Academy Award nominations for both actors. Superbly constructed and passionately made, Room is the kind of rare indie jewel that only comes around once every few years.