This year marks the 25th anniversary of a breakthrough album, one that, by bringing sampling up front and into a live context, came to redefine what a typical indie band could do. Soul Coughing's debut, Ruby Vroom, came at a time when hip-hop sampling had reached new levels of versatility, incorporating everything from jazz breaks to cinematic soundtracks. Yet the New York-based group was doing something entirely different: a mash-up of jazz-derived grooves, eclectic samples, and the juxtaposed meanings of lyricist/singer Mike Doughty. Though they evolved as the 1990s wore on, their trademark sound was signaled from their first release. And so it's entirely appropriate to celebrate the debut's quarter-century mark with a tour that recreates the album in its entirety. I spoke to Doughty, now happily ensconced in Memphis, about the tour and its upcoming stop at Bar DKDC on Sunday. 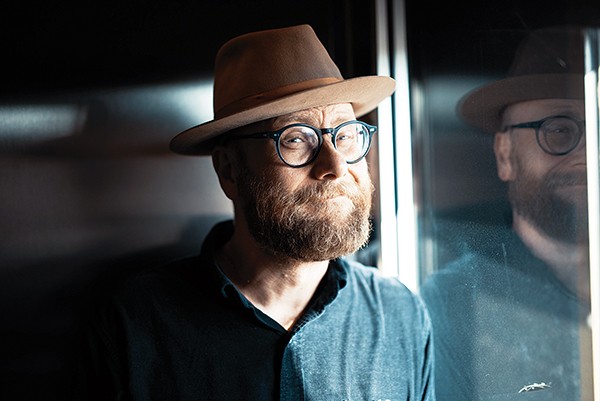 Memphis Flyer: Have you revisited the Soul Coughing material much since you went solo in the early 2000s?

Mike Doughty: Sure, I've definitely been playing individual songs in different formats — with bands, with just a cello player, or solo, absolutely. But not a whole album. I don't understand why bands didn't start doing this years ago. It's really fun to be inside this longer piece of music. You can really feel yourself in the lake of it, you know?

It must be different when you're revisiting your own work.

Not really. You sort of forget about that part. I guess I'm very in the moment when I'm doing it.

I always thought your lyrics were semi-extemporaneous.

Not really. A lot of them were written based on the sound of the words. So I guess that's why it sounds improvisatory. My bands in Memphis — MOTICOS and Spooky Party — who I play at DKDC with, those are entirely improvised bands. So I'm plenty into improvisation. On this tour, I have a system of hand signals that I use to cue people to start and stop and get louder and quieter. So there's almost live remixing going on in the middle of the tunes. I'm encouraging the players to improvise, but I'm not doing vocal improvisations.

What kind of band do you have on this tour?

It's a quintet: me, Scrap [Livingston] on upright bass, and then guitar, drums, and sampler. And it includes three members of Wheatus, who are also on the bill on the tour. They're not at DKDC because there's three backing singers in that band and an additional keyboard player [Memphian and Dixie Dicks member Brandon Ticer]. So Wheatus is a bit large for that little nook.

I expect you'll bring new arrangements to the old songs?

Yeah. A lot of it is similar, but also, it's just the nature of how I play music that things are sliced and diced.

The samples, I suppose, will offer a lot of room for experimentation.

Yeah, that's different. Just by the nature of it, that's more improvisatory. And I play sampler, as well as Matthew Milligan. Sometimes I'm singing, sometimes I'm playing the sampler and not singing. It's all live-triggered. It's not like we just click on a thing and a loop plays.

Will Sunday's show carry extra meaning, bringing the tour to your adopted home?

Yeah. I'm really excited to do it in Memphis. I absolutely love living here. I had the dumb idea of moving to Nashville when I was leaving New York, and a friend said, 'You know, I've always wanted to move to Memphis.' And I had never even considered it. So during my exploratory Nashville trip, I drove over and literally got an apartment in Midtown, just having visited for a couple days. I was like, 'I'm sold!' There's something that feels really mystical about Memphis to me. There's something magical about it. I just immediately felt at home. It's been four years for me, and I bought a house two years ago. I live in Cooper-Young, so I'll just walk home after the show.