Moments later, he smiles and accepts a plastic bag full of plump Tennessee lady peas from Yang Farms in Toone, Tennessee. It's Saturday morning, and we're up bright and early, shopping for lunch at the Cooper-Young Community Farmers Market. Trimm's daughter, 3-year-old Emma Kate, has gallantly agreed to come along and help.

"What do you want to eat, baby?" asks Trimm, boosting her up into his arms.

But Emma Kate is suddenly feeling a little shy. She blinks her glacier-blue eyes and buries her head in her father's neck.

In addition to his many other appealing qualities, Trimm also happens to be very brave. The executive chef at Southward Fare & Libations, Sweet Grass, and Next Door, he's agreed to be my guinea pig for the Flyer's very first Farmers Market Challenge. That's where I team up with a local chef, we go shopping at the farmers market, and the chef cooks a delicious meal with what we bought.

I know, right? It's a tough job, but somebody's gotta eat all that delicious food. 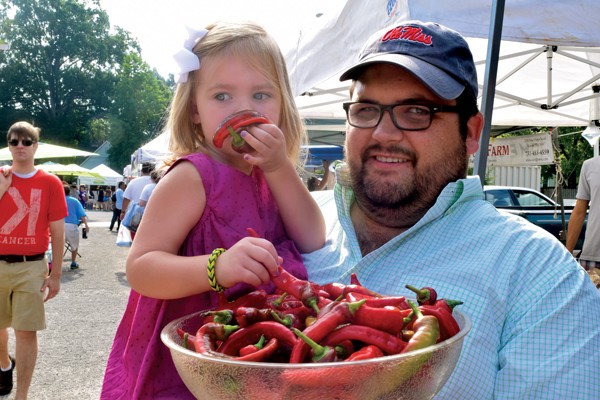 Today, Trimm is taken with the peppers from Tubby Creek Farm in Ashland, Mississippi. And no wonder, these peppers are works of art. The lipstick pimentos are little rainbows, grading in color from lime green to vermilion. And the Italian sweet peppers are downright sexy, long and plump with a taut, red skin. Trimm buys a pint of each.

Before we go, we stock up on tomatoes, okra, Texas sweet onions, herbs, and a butterscotch melon. The melon — from Hanna Farms, in Osceola, Arkansas — is like a cantaloupe, but smaller, about the size of a bocce ball. It's got a delicious caramel flavor, with a scent of gardenia.

"Smell that," says Trimm, holding up the melon. "You just can't find that in the grocery store." 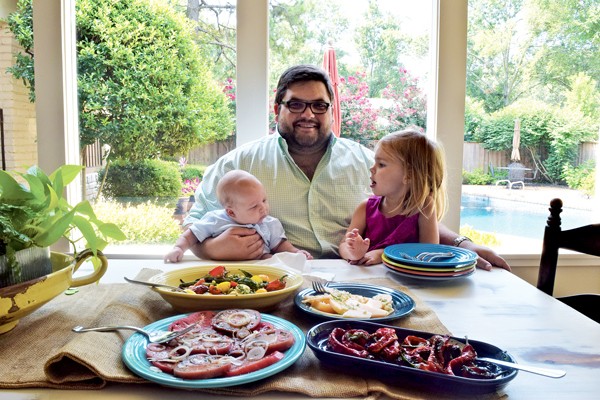 Trimm lives with his wife and two children in a spacious, two-story Georgian Revival near Park and Ridgeway. When we get to the house, Trimm's wife Sarah is trying to soothe 3-month-old Thomas, who has been sick this morning. Sarah, who teaches first grade at St. Mary's, says she met Ryan in high school, when she was a junior at St. Agnes and he was a senior at Christian Brothers.

"At this point, I've known him for over half my life," she says, burping baby Thomas. "I still can't get over how weird that is."

Everybody's getting hungry, so Trimm slices the melon, serving it with feta cheese and a bit of lemon verbena. It's an inspired combination. The cheese is just piquant enough to balance the melon's honeysuckle sweetness, and the citrusy lemon verbena puts an exclamation mark at the end of the sentence, so to speak.

Meanwhile, Trimm gets to work on the main course, what he playfully calls a "cornless succotash." Succotash — from the Narragansett word for "broken corn" — is a dish that New England colonists learned from Native Americans back in the 17th century. In its simplest form, it consists of corn and lima beans, prepared with cream or butter.

Today, we're cutting out the corn in favor of those scrumptious-looking lady peas. First, Trimm blanches the peas in boiling water. Then he fires up the sauté pan, and it's go time. One by one, veggies start to sizzle as they hit the hot oil: pimento peppers, okra, lady peas, and herbs. Trimm cuts the heat before tossing the mixture with butter and tomatoes. (Get the full recipe at memphisflyer.com).

Finally it's time to eat. We take our lunch in the sunroom, an airy space with a view of the family swimming pool. Alongside the succotash, Trimm serves the Italian sweet peppers, pan-roasted with parsley and garlic, and a crudité of tomatoes and onions.

"All right guys," says Trimm, rounding up the family. "Time for lunch."

It's an embarrassment of culinary riches. The tomatoes — Brandywines and Cherokee Purples from Lazy Dog Farms in Bethel Springs, Tennessee — are a meal unto themselves, tangy and sweet with a perfect texture. They go well with the Italian sweet peppers, which are smoky and savory, with a hint of sweetness.

But the okra in the succotash definitely steals the show. The taste is both unforgettable and hard to describe, somewhere between eggplant and asparagus. On my way out the door, I confess that this is the first time I've had okra that wasn't pickled or fried, and Trimm offers some tips for selecting okra at the farmers market.

"You really don't want it to be any bigger than that," he says, holding up his little finger. "Once you go bigger, the insides start to hollow out, and you get less meat for your bite."