This Memphis-based musical prankster matches a high-pitched, half-rapped drawl with a weed-centric, semi-utopian, NC-17-rated worldview. You may be confused, but you probably won't be bored.

Representing this year's Memphis in May honored country, Turkey, Duman is an Istanbul grunge-rock trio whose lead singer, Kaan Tangöze, first started writing songs while a college student in Seattle, learning the music from the source.

Georgia-bred indie rocker Chan "Cat Power" Marshall has been a cult favorite for more than a decade but has expanded her audience in recent years with a little help from some Memphis friends. The Greatest, which was recorded in Memphis in 2006, was a breakout record for Marshall and featured the work of several Memphis musicians, notably Hi Records guitar legend Teenie Hodges. Her latest album, a collection of mostly covers called Jukebox, continues the Memphis ties with takes on Jessie Mae Hemphill's "Lord, Help the Poor & Needy" and Dan Penn's "Woman Left Lonely."

Once the hot young gun of the Chicago blues scene, Buddy Guy is now the elder statesman, towering over that city's blues scene as Muddy Waters once did. A brilliant guitarist, Guy ventured south for 2001's Mississippi-recorded Sweet Tea to show he can still excel outside the standard Chicago style. This year he's on the big screen, stealing the show from the Rolling Stones in their concert film Shine a Light.

As the frontman of the Velvet Underground, Lou Reed served as the catalyst for the punk, glam, and alternative-rock movements to come. Since going solo in the early '70s, he's documented subterranean urban culture on the classic "Walk on the Wild Side," paid respects to the late Andy Warhol on Songs for Drella, and reported on urban decay in his hometown on New York. Though Reed's catalog of challenging, literate work is immense, he'll always be best known for the classics he penned for the Velvet Underground in the late '60s: "Sweet Jane," "Heroin," "Sister Ray," etc.

Guitarist Carlos Santana and his eponymous band injected Latin styles into the California rock scene of the '60s, going on to star at Woodstock and score hits with "Evil Ways" and "Black Magic Woman." Decades later, Santana made one of the most successful comebacks rock music has ever seen with the 1999 album Supernatural. The album sold more than 10 million copies and landed 11 Grammy nominations, morphing Carlos Santana from a classic-rock legend to a modern superstar.

Oracle and the Mountain

This heavy Southern rock band from Corinth, Mississippi, recently made the leap from unsigned Mid-South hopefuls to major-label up-and-comers, releasing their eponymous debut on Virgin Records this spring.

One of the best and most buzzed-about young rock bands around, this Georgia-based indie power trio evokes such alt-rock icons as the Replacements and even Nirvana. The band's label-released debut, this year's Mission Control, is a deceptively simple blast of crunchy riffs, locomotive drumming, and catchy hooks.

The Montreal-based pop-punk quintet Simple Plan have followed cohorts such as Blink-182 and Good Charlotte out of the scene's underground and onto the pop charts, scoring multiple hits with their 2004 breakthrough album Still Not Getting Any.

South African alt-metal band Seether has become Music Fest regulars, making appearances over the past few years. The band broke through in America via a slot on the Ozzfest tour in 2002 and hasn't looked back since. 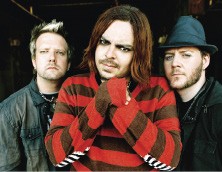 M-Town's own Al Kapone possesses one of the most original voices on the city's rap scene, but, more often than not, he's languished in the shadows of the monolithic Three 6 Mafia. More recently, however, this hardcore gangsta rapper has stepped into the light with releases like 2003's Goin' All Out and his contributions to the soundtrack of the Memphis-set rap film Hustle & Flow. Lately, Kapone has been working with a live band, the Untouchables, which should make his Dirty South rhymes translate well to the big stage this weekend.

This Canadian duo consisting of twin sisters is one of the biggest indie success stories of the past year. After a decade performing together, Tegan and Sara morphed from conventional folkies into a duo that incorporated punk and alt-rock into their sound on the 2007 breakthrough The Con, which was produced by Chris Walla of the Seattle indie band Death Cab for Cutie.

In 1992, West Coast so-called gangster rap was rampant, but an alternative emerged out of left field in the form of Arrested Development: a sprawling, rootsy, Afrocentric crew whose breakthrough hit "Tennessee" was a master stroke they could never repeat. A decade later, rapper Speech got the group back together, releasing the album Since the Last Time in 2007.

From an opening act for the Dave Matthews Band to a platinum-selling headliner, Australian jam band the John Butler Trio mine American roots music and rollicking, bluesy pop. The group's third studio album, Grand National, runs the gamut of contemporary pop, as Butler tries on hip-hop, reggae, and full-on rock for size.

On the surface, Matisyahu seems like a joke act — a Hasidic Jew celebrating his culture and religion via Jamaican reggae. But this high school Deadhead is serious. His second studio album, Youth, even went on to garner a Grammy nomination for Best Reggae Album.

Raised in the unlikely environs of Brookline, Massachusetts, this blue-eyed soul singer spent time in Clarksdale, Mississippi, after high school to get a real musical education. Reed's new album, Roll With You, demonstrates an ease with classic '60s soul that should place him near the top of the soul revival scene.

Baton Rouge swamp-blues stalwart Kenny Neal has long been one of the top names in contemporary blues. After growing up in a blues family around stars such as Buddy Guy and Slim Harpo, Neal has graduated to their level on his own. He recorded for Alligator Records for most of the past two decades but recently released Let Life Flow, his debut for another venerable blues label, Blind Pig.

Hailing from the Isle of Man, Backdoor Slam, featuring Davy Knowles on guitar and mandolin, Adam Jones on bass, and Ross Doyle on drums, will rock the Beale Street Music Fest with a sound that harkens back to earlier British blues-rock exports.

Watermelon Slim hardly fits the blues archetype. He's a Vietnam vet, former trucker, and recipient of a master's degree. Watermelon Slim also has channeled his creativity into a second career as a blues musician, releasing a protest album called Merry Airbrakes shortly after his stint in the service. Fast-forward three decades, and you'll find Watermelon Slim and his band riding the wave of their terrific album The Wheel Man.

Memphis harmonica master Billy Gibson must be living right to share the stage this weekend with two certified blues legends: The 94-year-old Pine-top Perkins is a boogie-woogie piano master who once replaced Otis Spann in Muddy Waters' band. The 76-year-old guitarist Hubert Sumlin is a youngster by comparison and cut his teeth as the great Howlin' Wolf's primary guitar foil.

One of the better recent comeback stories on the roots-music scene, Bettye Lavette was a cult-fave soul singer in the '60s but never broke through. An active live performer into the '90s, Lavette found her way back into a studio this decade and recorded with the rock band the Drive-By Truckers for her deep-soul testament The Scene of the Crime.

Richard Johnston has become one of the rising stars on the independent blues scene, winning the 2001 International Blues Challenge and releasing a best-selling debut album, Foot Hill Stomp, dedicated to — and inspired by — Jessie Mae Hemphill.

Known as the "Real Deal on Beale," Blind Mississippi Morris is a longtime staple of the contemporary Memphis blues scene, keeping the modern version of the Memphis sound anchored in its Delta roots.