Save Yourselves! Millennials Take On Alien Invasion. Laughs Ensue.

How many times this year have you opened your computer or glanced at your smartphone and exclaimed "Oh my god, this is bad!"? When Su (Sunita Mani) does it in the opening scene of Save Yourselves!, it's pretty relatable, right? Has the president given COVID to Betty White? Has Kanye tapped a swarm of murder hornets as his running mate? Are we out of toilet paper again?

In Su's case, the "Oh my god, this is bad!" is because her boyfriend Jack (John Reynolds) has accidentally closed all of her tabs on her internet browser. So, definitely not good, but it could have been worse. 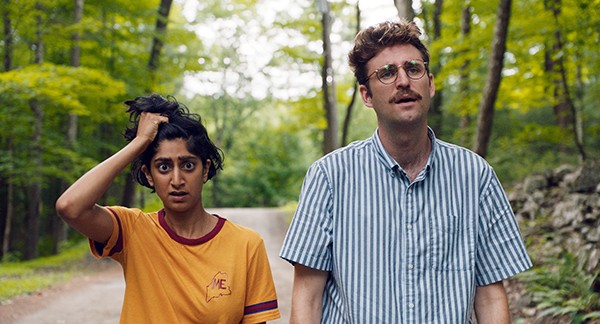 Su and Jack have a cozy little millennial life in Brooklyn. He is a software developer (of course), and she is a personal assistant. They are, like practically everyone else, living in a computer-created bubble of their own making. After the inevitable lovers' quarrel that follows Jack's thoughtless tab erasure ("I use those tabs for work!" Su cries.), they settle on the couch for a little make-up nookie — until Jack gets a text from his friend who is getting married. Distracted again, they retreat back into their smartphone bubbles.

The opening scene is a masterful piece of screenwriting and staging by writing/directing team Alex Huston Fischer and Eleanor Wilson. Save Yourselves! is their feature debut. It caused a stir at Sundance back in the Before Times of January, and was snatched up by Bleecker Street Films, the New York indie studio behind Logan Lucky and the Memphis-based Brian Banks.

At the wedding, they catch up with their friends IRL. Everyone, it seems, is doing something more meaningful with their lives than Su and Jack. Ralph (Ben Sinclair) quit his job as an investment banker to found a start-up that is 3D printing eco-friendly surfboards inspired by whale tails. As the wine flows and the conversations deepen, Ralph offers to let Su and Jack use his grandfather's cabin near a lake upstate.

Su jumps at the opportunity to get out of town. They both need time away from their phones, their laptops, the internet, and life in general, to put things in perspective. "I want us to be better people," she says.

The plan is to spend a disconnected week at the cabin. No internet, no Alexa, just nature. All this information overload has a tendency to make trivial things seem important. We think we have to keep checking Twitter and Facebook or risk being out of touch, but self-care is more important. What are they going to miss during their week away that's so paramount?

How about an alien invasion? While Jack and Su are holed up in the cabin, drifting around a lily-pad-filled pond in a borrowed canoe, smoking weed, and watching a weird meteor shower, all hell breaks loose back home. The aliens might look like harmless puff balls, but they make quick work of human civilization. Jack must come to terms with the fact that his web design skills are suddenly irrelevant, and he can't even start a fire.

Save Yourselves! is a sci-fi horror comedy in the tradition of Shaun of the Dead and Zombieland. Like Cloverfield, it's a ground-level view of an apocalyptic alien invasion, only funny. Fischer and Wilson's biggest asset is Sunita Mani. You probably recognize her from a Progressive insurance commercial, but she's been demonstrating her razor-sharp timing in the ladies wrestling comedy GLOW and indie films like the criminally overlooked The Death of Dick Long. She also appeared in the fantastic short film "Dick Pics! (A Documentary)," which appeared at last year's Indie Memphis.

The hipster mustachioed John Reynolds is Mani's ideal foil. His Jack is fabulously insecure, but genuinely loves Su. He's no better at the "new masculinity" than he is at the old one. You can't help but root for them, even as they find themselves deep in a hole and just keep on digging.

This film is definitely in the low-budget indie category, but the team makes every penny count. Matt Clegg's cinematography looks like a million bucks (which is probably how much the movie cost in total). It's a refreshing change from indifferently shot, improv-based comedies that populate streaming services. The modest special effects sequences fit perfectly amid the shaggy dog storytelling. Fischer and Wilson delight in pulling the rug out from under their characters, and just when you think they've written themselves into a corner, they pull out an unexpected ending that feels thematically connected to the opening scene.

Shot before the pandemic, Save Yourselves! captures the feeling of isolation, and having your worst fears realized on the regular. If that's not relatable in 2020, I don't know what is.

Save Yourselves! is now playing in theaters and streaming online.