Musicians unite for Rock For Love 3 and the Church Health Center.

It's official: What's happening at 1210 Peabody Avenue — the site of the Church Health Center — is revolutionary.

While Americans are showing up at town hall meetings to weigh in on Obama's health-care strategy, thousands of Memphians are quietly changing their lives, one body, mind, and soul at a time.

"Memphis founded the first self-service grocery store, rock-and-roll, and the largest faith-based entity that helps the uninsured in the country," quips Marvin Stockwell, spokesman for the Church Health Center. He also notes that the organization has 55,000 patients who make 36,000 doctors' visits per year for an average fee of $20 per visit.

This weekend, the Church Health Center and the staff of the local Makeshift Music collective are hoping to raise $25,000, enough money to fund the organization for a week.

The third annual Rock for Love benefit features concerts at the Hi-Tone Café on Friday and Saturday nights, as well as a free Saturday afternoon show at Shangri-la Records. A variety of local bands, including Snowglobe, John Paul Keith and the One Four Fives, Two Way Radio, the Warble, River City Tanlines, Blair Combest, the Simpletones, and the Magic Kids, are slated to perform.

"I've got 20 years of being in a punk band under my belt," he says. "The whole reason I was drawn to punk rock was that it was music that's really about something, so I guess it helped me prepare to be a public relations person for a non-profit. The core lessons of punk bands like Minor Threat and 7 Seconds are about personal and political change, about making the world a better place, and learning how to build community."

The next night, Jeff Hulett, another Church Health Center employee, will perform along with his band Jeffrey James and the Haul.

At Shangri-la on Saturday afternoon, J.D. Reager, Rock For Love's co-organizer, Makeshift Music employee, and Memphis Flyer contributor, will take the stage as frontman for J.D. Reager and the Cold Blooded Three. Later that night, he'll strap on his guitar for Two Way Radio's set.

"A few years ago, I had to go to the emergency room. I didn't have to pay a single dollar for it, which was pretty cool," says Reager, who originally joined the Church Health Center through its Memphis Plan, a low-cost alternative for medical insurance. 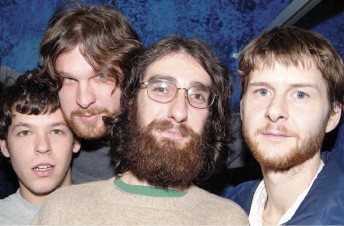 He began planning Rock for Love 3 in February.

"It's cool that so many bands want to support the Church Health Center," Reager says. "They're willing to put their egos aside for Rock for Love and work together, which is really special."

Musicians aren't the only ones stepping up to help with Rock for Love 3, which will include a silent auction hosted by the Memphis Roller Derby and a beer garden in the Hi-Tone's back parking lot.

At a time when corporate sponsorships are limited, a wide range of companies from SunTrust and Elvis Presley Enterprises to 2 Chicks and a Broom and Traphix Entertainment are helping to underwrite the event.

"This is about the Memphis music scene — both the bands and the establishment — giving back to an organization that cares about Memphis," Stockwell says.

Other cities, he says, are taking notice.

"There are now 20 to 25 clinics in the United States that have patterned themselves on the Church Health Center," he says. "We're not selling franchises, but three times a year we give replication workshops. We'll say, 'Come spend two full days with us and learn the nitty-gritty, the nuts and bolts of what the Church Health Center does.'"

Although the Church Health Center's goal is to provide affordable health care to all working uninsured and their families, musicians are due to reap the benefits in two music-centric cities.

In Missouri, the residents of Stone and Taney counties — including many musicians who play at the myriad tourist attractions in Branson — are awaiting the groundbreaking of Faith Community Health Center.