Scary Stories To Tell In The Dark

A plucky little horror film that delivers what it promises.

Scary Stories to Tell in the Dark is bookended by two versions of "Season of the Witch." Over the opening credits is Donovan's psychedelic classic from 1966, the dark side of Sunshine Superman. The second is a confident, if breathy version by Lana Del Rey, who becomes the latest artist to attempt to capture the song's serenely spooky vibes.

What can an artist bring to something like "Season of the Witch"? The song's Wikipedia entry lists 26 different versions, done by everyone from Vanilla Fudge to Hole. Maybe the reason the song appeals to so many artists is because it has strong bones. Its soft-loud, verse-chorus structure would be appropriated by the Pixes in the 1980s and inspire a legion of imitators, including Nirvana. The lyrics are as vaguely threatening as they are nonsensical. Versions like Del Rey's continue to sound fresh because the artists have sussed out the secret: Just do it like Donovan did it, and you'll be okay. 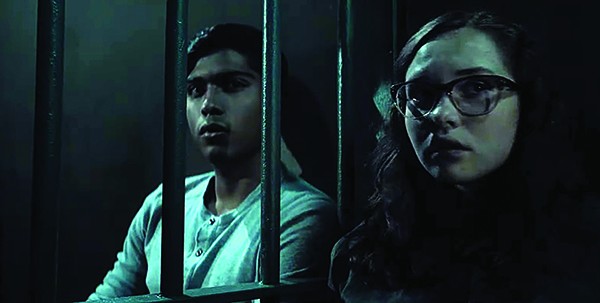 Good bones are what keep Scary Stories to Tell in the Dark upright. It's an adaptation of a series of short story anthologies released in the 1980s by folklorist and fantastically prolific author Alvin Schwartz. The stories, which are aimed at young readers, are short and often gruesome resettings of campfire tales and dimly remembered legends. Schwartz's books, greatly enhanced by Stephen Gammell's haunting illustrations, have consistently appeared on the American Library Association's Most Banned list for the last 30 years.

Horror maestro and 2017 Best Picture winner Guillermo del Toro executive produced this long-gestating adaptation. Instead of doing a Creepshow-esque anthology, del Toro crafted a framework story and tapped Trollhunter helmer André Øvredal to direct. It opens on Halloween of 1968, which the narrator describes as "The last autumn of our childhood." The narrator is revealed to be a teenager named Stella (Zoe Margaret Colletti), who is fastening fake warts to her face and applying black lipstick to dress as a witch for the annual shenanigans in the small town of Mill Valley, Pennsylvania. She meets up with her friends Auggie (Gabriel Rush) and Chuck (Austin Zajur), and they set out to exact a little flaming bag of poo-themed revenge on bat-wielding bully Tommy (Austin Abrams). But when their plans go pear-shaped, they flee into a drive-in theater, where they are saved by Ramón (Michael Garza) as Night of the Living Dead spools in the background.

The group finds their way to the town's only bona fide haunted house. Naturally, it's a crumbling late-Victorian affair where the rich descendants of the Bellows, the town's founding family, degenerated into gothic madness. Their youngest daughter Sara (Kathleen Pollard) was an albino whom they kept locked away in shame. The family is long since gone, but Sara has lived on in legend for the scary stories she would tell to any 19th-century kid brave enough to sneak up to the manse.

If the above seems like a lot of trouble to go to in order to set up a framing device for a bunch of short creepy tales, well, it is. Øvredal and del Toro work very hard to get us invested in this group of small town outsiders living on the eve of Nixon's election. It helps that Colletti brings some big Hermione energy as the ostracized smart girl who is obsessed with writing horror. Their prank wars soon turn seriously spooky when aspiring writer Stella steals Sara's book of scary stories scribbled in the blood of children, and Tommy has a run-in with a sinister scarecrow.

Horror aficionados will recognize many of the tropes at play here, which lean much more heavily on Cronenbergian body horror than the retro setting would suggest. Especially upsetting is the poster-worthy pimple from hell suffered by Chuck's sister Nancy (Natalie Ganzhorn) on the night of the high school's big harvest festival. But what Scary Stories lacks in originality, it makes up for in execution and heart. Øvredal makes a virtue of his limitations, shooting in a muted autumnal palette and even getting a scare out of the color grading at one point. The eager actors and mid-budget, analog feel to the effects turn out to be the film's greatest assets. There are a lot of parallels to the Stephen King horror juggernaut It, and when the nerdy Auggie dresses as a clown for Halloween, it is surely meant as a jab at the competition. Admittedly, not everything here works, but I greatly prefer Scary Stories' playful pluck to the reverent sterility of It.