The de-annexation bill that was temporarily stalled in the state Senate on Monday of this week was, as this week's Flyer cover story (p. 14) documents, the subject of concerted resistance activity on the part of Memphis legislators, city council members, and representatives of the Greater Memphis Area Chamber of Commerce.

Many of the same legislators were part of another never-say-die effort, this one mounted by the House Democratic Caucus, which got behind an effort by House Democratic leader Craig Fitzhugh (D-Ripley) to enable a non-binding resolution for a statewide referendum on Governor Bill Haslam's moribund Insure Tennessee proposal.

That proposal, which would have allowed some $1.5 billion in federal funds annually to further Medicaid expansion in Tennesee, has been so far bottled up by the Republican super-majority in the General Assembly. And Fitzhugh's resolution itself was routed off to the limbo of legislative "summer study" as a result of a procedural gambit employed by Representative Jeremy Durham (R-Franklin), who was formally ousted from his House leadership positions recently because of allegations involving improper activities involving interns and female staffers.

Memphis representatives Joe Towns, Larry Miller, and G.A. Hardaway were among those speaking on behalf of reactivating Insure Tennessee legislation at a press conference last week in Legislative Plaza.

• Ninth District Congressman Steve Cohen began the week as a part of the entourage that accompanied President Obama on his history-making trip to Cuba, where the president furthered the official Cuba-U.S.A. relations he reopened last year.

The trip was the second one to Cuba for Cohen, who also was part of a delegation accompanying Secretary of State John Kerry to the Caribbean island nation in 2014. The Memphis congressman obviously went to some considerable effort to get himself involved with both missions. Why Cohen's more than usual interest in the matter?

Well, first of all, the congressman has long advocated a normalizing of relations with Cuba, which became estranged from the United States during the height of the Cold War when Cuban ruler Fidel Castro instituted what he termed a communist revolution and cozied up to the Soviet Union, then a superpower antagonist to the U.S.

Cohen has favored rapprochement and an end to the still-active trade embargo on political and economic grounds, pointing out that the Cold War, at least in its original form, is long gone and that American enterprises, in Memphis as well as elsewhere, stand to prosper from improved relations between the two countries.

And there is the fact that, when Cohen was growing up, his family lived in Miami, the American city closest to Cuba and one containing a huge number of exiles from that nation.

But there's more to it than that —as those Memphians know who were privy to an old AOL email address used by Cohen, one that employed a variant on the name of former White Sox baseball star Minnie Miñoso, who happened to hail from Cuba.

The backstory involving Cohen and Miñoso was uncovered this week for readers of the Miami Herald by reporter Patricia Mazzei in a sidebar on Obama's trip to Cuba.

Mazzei related the essentials of a tale familiar to those Memphians who were readers of a Cohen profile that appeared in the Flyer's sister publication, Memphis magazine, in 2001. After noting that the young Cohen, who had always aspired to an athletic career himself, had been afflicted by polio at the age of 5, Mazzei goes to observe: "His parents, lifelong baseball fans, took young Steve, hobbled with crutches, to see Mom's hometown Chicago White Sox at a Memphis exhibition game. Steve made his way near the field to plead for autographs.

"That's when a pitcher, Tom Poholsky, handed him a real Major League baseball. It wasn't from him, Poholsky told him. It was from an outfielder who couldn't give the boy the ball himself because this was Memphis, in 1955, and the outfielder was black. The first black White Sox, in fact.

"His name: Minnie Miñoso. A native of Perico, Cuba."

The young Cohen was struck by the fact that Miñoso, who for obvious reasons became something of a personal idol for him, had been so inhibited by restrictions that were part of an outmoded way of life, and his lifelong emotional attachment to the great Miñoso, who died only last year, ensued.

He brought several more such caps with him to hand out here and there on the current presidential trip. 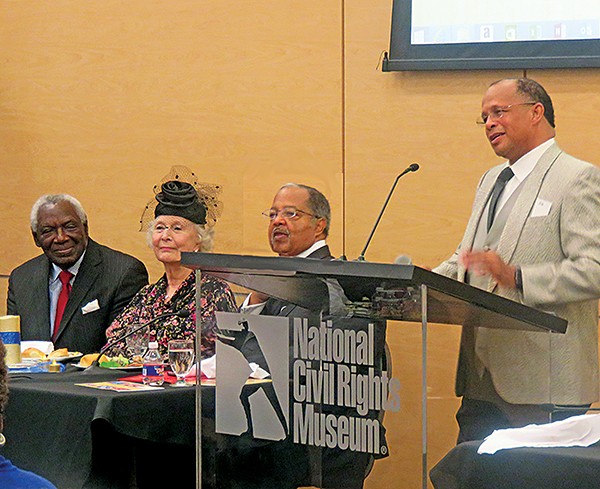