So, okay, the newly elected version of the Shelby County Commission began the process of reorganizing itself  on Monday, keeping some of the body's traditions and abandoning others — managing to be somewhat surprising, either way.

The man of the day was Van Turner, who became the new commission chairman. There was no surprise there — except maybe to those who expected one erstwhile custom — that of automatic promotion to the chairmanship of the previously serving vice chair. That would be Willie Brooks, like Turner a second-termer, who was at least expected to serve as acting chairman for the chairmanship vote.

But when clerk Rosalind Nichols undertook to assist the commission, eight of whose 13 members are brand-new, by explaining the bylaws for the reorganization, she specified that two votes would be held. And when nominations were invited for the first of those, for acting chair, the new commissioner from District 1, Amber Mills, had first dibs and nominated Turner.

Turner, as it happens, had written to each commissioner, expressing his wish to be chairman, and Mills, understandably, may have become confused as to the order of things. In any case, Turner was elected acting chair in a lopsided vote over Brooks and presided over the vote for permanent chair, winning that by acclamation.

Another returning commissioner, Reginald Milton, a Democrat like Turner and Brooks, had aspired to be vice chair and had done some proselytizing to that effect, stressing that it was time to discard the commission's vintage habit of alternating power positions between Democrats and Republicans. Simultaneously, returning GOP Commissioner Mark Billingsley had dispatched a letter to his fellow commissioners making the contrary case.

When it came time to vote, not only did the four new GOP members vote his way, so did most of the Democrats. Final vote: 9-3 for Billingsley.

There was more to the votes for chair and vice chair than honorifics. Turner had managed to establish what had long been forecast to be his ultimate preeminence on the commission, and Billingsley had maintained at least the semblance of bipartisan sharing, as well as his own viability. 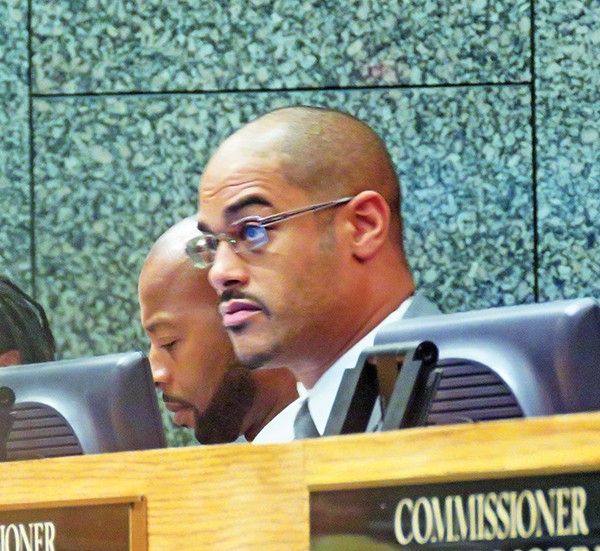 There was one more decisive act on Monday, and, appropriately, it came from Turner, who announced to all and sundry that he would be appointing a task force to maintain liaison with the Memphis City Council and would construct it around the person of newly elected Commissioner Edmund Ford Jr., who, after his election to the commission on August 2nd, continues to serve on the City Council, along with two other Council members — Bill Morrison and Janis Fullilove — who were also elected to county positions and remain on the council.

By keeping up their council identity, which by statute they can do until 90 days after their election to new office — November 2nd, in this case — the three departing council members will negate the organized efforts of various activists to call for a special election in November to replace them, thereby allowing their successors to be chosen by the remaining council members in an appointment process for which the current council has become notorious.

At least where Ford is concerned, Turner's action in effect provides cover for the process. In announcing his task-force plans, the new commission chair touted Ford's dual service as an opportunity to "utilize the fact that he's also a city councilman for these waning months" and "allow us to see what's going on in the city from the county perspective." Among the issues to be examined in this way by Ford and whoever else ends up on the task force are MATA and health care, two areas of city/county joint concern.

Asked about this de facto seal of approval (which, to be fair, could also be seen as a simple acknowledgement of reality), Commissioner/Councilman Ford denied outright that there was any "controversy" involved in his continuing to serve in two different elected bodies.

"The people in my district don't care," the commissioner from District 9 insisted, speaking of a forthcoming "meeting" that evening involving the constituents of Council District 6. • Several members of the commission, along with other local elected officials, took part on Saturday in the annual Orange Mound Parade through that centrally located African-American Memphis neighborhood. Among those taking part was Phil Bredesen, the former two-term Tennessee governor, now running for the U.S. Senate as the Democratic nominee. Bredesen's Memphis schedule on Saturday also included a luncheon appearance in Germantown with the "Women United for Bredesen" group and a planned participation in the Southern Heritage Classic Tailgate, which ran into bad weather.

All the events served as a sort of run-up to another Bredesen appearance this Thursday night. Currently billed as a "'Memphis Matters' Ideas Forum" at Rhodes College, it is what remains of what was originally intended by the sponsors (including Rhodes, WMC-TV, and the USA Today newspaper chain) to be one of four statewide televised debates between Bredesen and the Republican Senate candidate, 7th District U.S. Representative Marsha Blackburn.

For whatever reason, Blackburn demurred at the idea of a debate at Rhodes, and the Bredesen campaign has been making the most of that decision, sending out press release after release accusing the GOP candidate of ducking a joint encounter in Memphis and playing up the newly configured Ideas Forum as a vehicle for their candidate to hold up his end on the matter.

At press time, Blackburn could not be reached on the matter of the aborted Memphis debate. Although two subsequent debates have since been arranged between the Senate candidates for Nashville and Knoxville, the only exchanges between the two candidates thus far have occurred via TV ads.

Blackburn currently has two attack ads running, one featuring President Trump endorsing her and bad-mouthing Bredesen and another accusing the former governor of favoring additional taxes and of gussying up the governor's mansion at taxpayer expense. Both claims are somewhat off the mark. As Bredesen maintained in a response ad, he did not raise taxes, and, while the governor's mansion was renovated during his tenure, he and his wife did not live there, remaining instead in their Nashville residence.

While most of his TV commercials to date have featured Bredesen sounding soft-spoken and willing to work across the partisan aisle, at least one ad on his behalf has appeared of late accusing Blackburn of excessive travel and other high-living habits on the taxpayers' dime.