Memphis Botanic Garden is constructing a $6.1 million stage area for Live at the Garden.

The Live at the Garden stage at Memphis Botanic Garden has seen its share of music legends. But until this year, not even Debbie Harry, Seal, or Lynyrd Skynyrd had a permanent stage to grace.

After the summer concert series ended each year, the temporary stage was torn down. But when Live at the Garden kicks off on June 21st, the performers will be breaking in a new permanent stage. 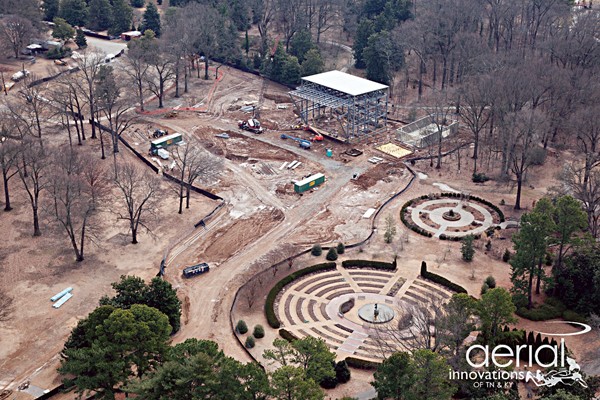 The stage is under construction now, along with a new V.I.P. "Encore Building," two box offices, a permanent food court, and a "living wall" created from seasonal plantings around the periphery of the concert area.

"Having a permanent stage eliminates so much overhead," said Jim Duncan, executive director of Memphis Botanic Garden. "Now we can focus on more than just Live at the Garden, which will be unchanged. We'll still have five shows and quality acts. But we'll also be able to have ancillary performances."

Duncan suggested they may host performances for local ballet companies and the Memphis Symphony Orchestra. They'll also be able to offer live programming for children.

"We tried to have James and the Giant Peach here a couple years ago and didn't have a place suitable to do it," Duncan said.

With the former setup, V.I.P. tables were placed directly in front of the stage. The new stage will have a pit that will hold about 100 to 125 people "to generate more energy for the performers," Duncan said. And since the pit will be lower than ground level, it won't impact sight lines for the table seats behind it. Lawn seating will remain largely the same, but the stage is now positioned about 150 feet farther to the west.

A "living wall," a solid line of plants that will go around the Live at the Garden area's perimeter, will bring more of a garden feel to the stage area.

"There will be demonstration flower beds along the living wall to enhance the area for visitors. And we'll have some educational programs associated with the plants on the wall during times when we don't have a concert," Duncan said.

The V.I.P. "Encore Tent," where table-seating guests had access to a bar and snacks, will now be a permanent 4,775-square-foot building. When it's not being used for Live at the Garden patrons, the Encore Building will be used for the Garden's educational programs and special event receptions.

The construction project costs $6.1 million, much of which Memphis Botanic Garden has already raised through its capital campaign. Duncan is certain the remaining balance will be met by the time Live at the Garden opens this summer.

"This will not be an area that opens with a debt load," Duncan said.

The music lineup for this year's Live at the Garden series will be announced on April 8th.

Additionally, Memphis Botanic Garden is renovating its Sculpture Garden, the area just outside the main doors of the visitors' center building. Art gallery owner David Lusk is helping to curate locally made sculptures to display there. A renovation is also underway for the Sensory Garden. That area is getting a facelift and new plants.

"It's going to have a cooler palette than what we had," said landscape architect Tom Pellett. "This garden has four distinct seasons, and the summer will be white, lavender, and purple. You'll be able to smell something just about every day you're here, and you'll see something in bloom every day."