If you want some measure of just how good William Shakespeare was on his best days, look no further than the New Moon Theatre Company's gag-packed production of Twelfth Night, a romantic comedy teetering at the edge of farce. Jokes can be fragile things, losing their punch with time, as sensibilities evolve. But 418 years after he wrote it down, Twelfth Night's jokes still land on their feet, and stumble hilariously into pratfall. This latest revival is curiously uneven but still bursts with life and laughter at TheatreWorks.

Director John Maness' concept may result in deja vu for area theatergoers. Though the costumes lean Regency, the conceit is Elizabethan, and a set designed to resemble the Globe or Blackfriars Theatre. So in many regards, it's exactly like every Tennessee Shakespeare Company production since the full-time classical company moved into its new East Memphis home. Original recipes are never a bad choice, but New Moon has always been a company one could count on for variety. 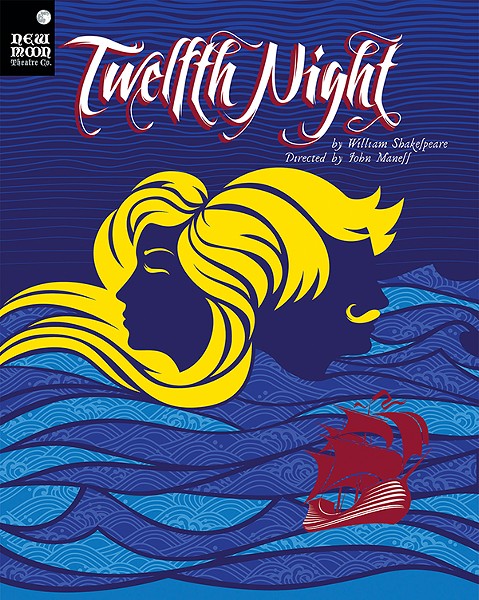 The story goes like this: In a world of beggars, bon vivants, and pranksters, Duke Orsino's charming servent Cesario (really Viola, a shipwrecked twin dressing like a man), pursues the Lady Olivia on his/her master's behalf. Things go awry.

A few actors struggled with lines at opening, and at least one principal seemed to be performing in an intimate film while everybody else chewed the scenery and played to a much larger house. But when it was on, this Beatles-enhanced stumble past love and death endeared itself to the crowd, with a dash of improv and an abundance of good fooling.

Twelfth Night is at TheatreWorks through May 5th.

What's the purpose of noise? In propaganda, it's an effective tool. Noise and competing facts disrupt, confuse, and numb us until basic self care — not even preservation — becomes a mighty instrument of control. It's slow, low-impact torture, but the cumulative result is stunningly effective. I'm leading with this because weaponized information is a fact of modern life, and the major theme explored in Robert Icke and Duncan Macmillan's recent adaptation of George Orwell's landmark novel, 1984. As the story veers away from Winston and Julia's secret romance in a paranoid society, this interpretation evolves into an academic lecture on the art and science of manufactured reality.

Projected fields of text against gray, Bauhaus-inspired set pieces are as stunning as Orwell's ever-prescient words: "War is peace, ignorance is strength, freedom is slavery." All these layers create a visually remarkable environment at odds with itself. Carter McHann's anxiety-inducing sound design proves almost too effective. Propagandists benefit when the crowd numbs out, actors not so much.

Director Courtney Oliver wrestled this minimal but tech-heavy show into a matter of substance and clarity. Her cast is grounded, resulting in humane performances led by Danny Crowe as the show's protagonist, Winston Smith. Even when the text gives actors only a note or two to blow, they blow them fearlessly. Oliver's prudence is also evident in an avoidance of contemporary political tropes. She navigates the storm of projected information and noise, letting the adapted work speak for itself.

Greg Boller goes sleazy as O'Brien, the inner-party member posing as a gateway to the resistance. Boller delivers a solid crash course in gas-lighting and the mechanics of the long con.

Indirectly exposing the audience to low grade torture techniques — flashing light, grating inescapable sound, making us all hold our pee through the intermission-free show, etc. — drowns out a more interesting theme: Are our heroes, villains, allies, and enemies all fictional constructs?

As historic text, 1984 mocks us, predicting a "black mirror" environment of compromised privacy, nationalism, and weaponized mass-information. As a piece of contemporary theater, this version of the story is neither agitprop or entertainment. It's an experience. Whether it's pleasant or not may prove to be a subject of contention, and probably beside the point.