Jackson Baker Where’s Zoey? Can’t say where Waldo is, but that’s Zoey Goss sitting up there (briefly) in place of County Commissioner Mark Billingsley, who with other commissioners voted Monday to contribute $8,000 to a summer camp for Zoey and other children suffering from muscular dystrophy. 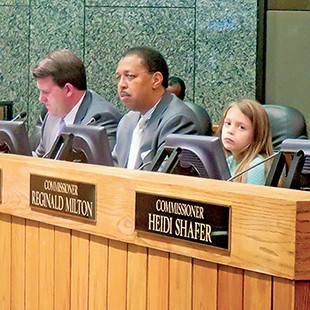 The Shelby County Commission, as currently constituted, is turning into a juggernaut of sorts. Chairman Terry Roland of Millington and Commissioner Heidi Shafer of East Memphis are but two of the determined commission members who have kept in working order a bipartisan majority that is perceptibly and consistently expanding its influence and authority vis-à-vis other power blocs.

For months now, the commission has been challenging the prerogatives of County Mayor Mark Luttrell's administration and asserting its own. "We are the people," is a frequent boast by Roland, who attributes to Luttrell and others holding executive positions not much more than a responsibility to carry out commission policy dictates.

In defense of that position, he and Shafer, along with former Commissioner Julian Bolton, the independent counsel they are attempting to hire, cite various portions of the County Charter, laying special stress on its apparent conferring on the elected commission, "all lawful authority to adopt ordinances and resolutions governing the operation of government or regulating the conduct and affairs of the residents of the county."

As for Luttrell, Shafer defined his role this way in a recent Viewpoint article for the Flyer: "The mayor is charged with seeing that all resolutions and ordinances of the board of county commissioners are faithfully executed. He or she is to present the consolidated county budget to the commission, which has full rights to modify or amend. The mayor is also compelled to 'take such other executive and administrative actions as are required by this charter or may be prescribed by the board of county commissioners.'"

The administration has not yet loosed its own heavy artillery, fighting things out so far on the single issue of whether the commission has the right to an independent counsel — something that neither Luttrell nor his appointed county attorney, Ross Dyer, have been willing to concede. Both claim that only the elected chief executive, Luttrell, has contractual authority under the terms of the charter and that the county attorney and all of the office's assisting personnel are contracted employees.

In the face of advice from Dyer that Bolton's appointment would be illegal except as a possible adjunct to Dyer's own staff and under his supervision, the commission voted late last month to hire the former commissioner. Mayor Luttrell subsequently vetoed the appointment, and the commission, in a special called meeting last week, found nine votes to override the veto — one more than the two-thirds majority required for an override.

Inasmuch as Luttrell has indicated he will refuse to sign a contract of employment for Bolton, the matter lies in limbo, awaiting either a legal determination, perhaps in Chancery Court, or some solution based on a compromise reached between the commission and the administration. A possible basis for the latter is the situation on the other side of Mid-America Plaza in City Hall.

There, Allan Wade has served since the 1990s as the Memphis City Council's attorney, functioning both as a counterweight to the city attorney and an alternative source of legal opinion during public meetings from the desk he occupies on the floor adjacent to the council. Wade's office is often cited by members of the county commission as a precedent for the one they intend to create. Interestingly, though, and this is where the prospect of a compromise on the county side begins to gleam, a striking analysis has been offered by Jimmie Covington, a longtime former journalist whose knowledge of city/county affairs was voluminous enough that the public officials he reported on frequently sought his opinion on matters under contention.

In another recent op-ed for the Flyer, Covington advanced the idea that there is no actual legal basis per se for Wade's position of city council attorney — merely an ad hoc gentlemen's agreement between the principals of city government that has spanned almost a quarter century. A solution of that sort on the county side is not impossible; Roland has hinted privately that it, or something like it, could be the carrot in a scenario whereby the stick might be a commission challenge to Dyer's tenure as county attorney.

("No comment" has been Dyer's consistent response to all direct queries about the current imbroglio — which should not be taken to mean that he and Luttrell are not incubating an in-depth strategy of their own.)

So far the bipartisan majority for the commission's power move has held — though there are clear indications that some commission members are not at home with the idea of prolonged conflict with the administration. David Reaves, who represents Bartlett, has been a dissenter on several recent votes regarding the attorney matter, though he was on the same page as fellow Republicans Roland and Shafer regarding some of the early challenges, which revolved around differences of opinion between the administration and the commission regarding the amount and disposition of a fiscal surplus.

Bipartisan coalitions are potentially unstable by their nature. The current one is Republican-led, from a base that has included five of the commission's elected Republicans, plus Democrats Justin Ford and Eddie Jones, whose allegiance is provisional and dependent more on personal accommodations than on ideological grounds.

Largely as a result of internal machinations that denied him the chairmanship, the other elected Republican, Steve Basar, has been in de facto alliance with the commission's Democrats on several specifically partisan matters, though his was a crucial swing vote for last week's veto override.

From the standpoint of maintaining a bipartisan coalition versus Luttrell, the status of designated commission counsel Bolton as an African-American Democrat has been a crucial binder (though it is also the source of some of the misgivings harbored by Reaves and potentially other Republicans). In a commission meeting two weeks ago, Shafer bruited about the names of others who had been considered for commission attorney, including former GOP commissioners Charles Perkins and Buck Wellford, both of whom, she said, had declined the opportunity.

She also had mentioned in passing former Democratic Commissioner Steve Mulroy, who said this week that Shafer had contacted him as a reserve possibility if the current involvement with Bolton came unglued. (Mulroy said he had recommended instead that the commission consider an African American without any particular political bias.)

Meanwhile, even as there is a temporary lull in the matter of a commission attorney, the ad hoc commission coalition has opened up a new front with a different adversary — the Economic Development Growth Engine (EDGE) board.

• EDGE, the quasi-independent city/county agency charged with overseeing industrial recruitment and development, has often been the subject of public criticism for its decisions on payment-in-lieu-of-taxes (PILOT) arrangements with businesses. It has come in for criticism on the commission for that and for the fact that the representatives on the EDGE board of the commission and the city council are ex-officio non-voting members only.

Another bone of contention is an assumption that EDGE officials are on the cusp of completing a merger with the local Community Redevelopment Agency (CRA). Commissioner Basar introduced a resolution on Monday requiring EDGE to get the approval of both the commission and the city council before proceeding with a merger.

Perhaps because of its sponsorship (Basar is still persona non grata with the dominant coalition), the commission approved instead a motion to send the matter back to committee, as well as a resolution from Shafer requesting that no action be taken by EDGE and CRA until the full commission can formally review the matter at its December 7th meeting. Added Roland, ominously: "I am giving a firm warning to EDGE that if they try to sign a memorandum of understanding or go around us in any way possible, there will be a resolution from us rescinding EDGE."

Yet a third commission foil, the Shelby County Schools board got off the hook Monday when, after serious criticism from members regarding SCS officials' inability to be specific in their reasons for requesting commission approval of reshuffling some $10 million in previously allocated funds, the approval was granted, but with warnings from Shafer, among others, that the commission would require more details and more advance knowledge before approving any future such requests.