Shirley begins with Rose Nemser (Odessa Young) discovering Shirley Jackson the same way most people do, by reading "The Lottery." Part dystopia, part folk horror, and part social commentary, "The Lottery" is about an idyllic small town that chooses a citizen at random to stone to death every year. The story's stark warning about the dangers of blindly following tradition have reverberated since it was first published in 1948, and it is now taught in high school literature classes. But it wasn't always revered. Many found it baffling and nauseating. Later in the film, Shirley Jackson (Elisabeth Moss) describes it as "the most hated story in the history of The New Yorker."

The love/hate dynamic is the core of Josephine Decker's loose biopic of Shirley Jackson. Based on a book by Susan Scarf Merrell, the story focuses on a time in the early 1950s when the writer was creating her second novel, Hangsaman. She is living with her husband, literary professor Stanley Edgar Hyman (Michael Stuhlbarg), at Bennington College. Shirley is desperately depressed as she tries to crack the character of Paula Jean Welden, a Bennington student who mysteriously disappeared in the Vermont woods, for her novel. 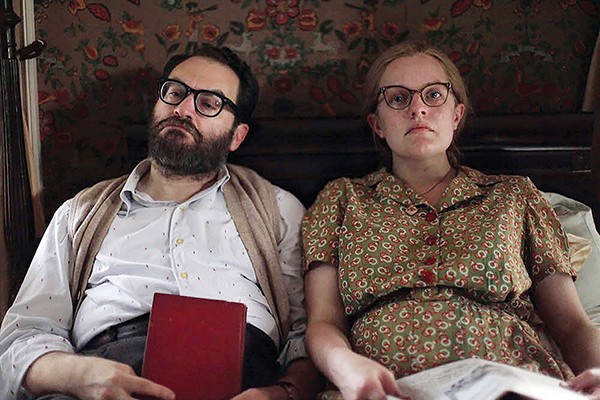 If Shirley doesn't serve any other function in your life, I hope it makes you feel better about your relationship — or lack of one. Shirley and Stanley are the Magic Johnson and Larry Bird of psychological abuse. Stanley is a popular professor and notorious philanderer who openly flouts his co-ed conquests. Shirley is an acute observer of humanity who does not hesitate to use her powers to drop the most hurtful comment at the moment of maximum psychological damage. And yet, they're perfect for each other. Maybe it's because they're the only ones who can keep each other in check. Without Shirley, Stanley would be just another predatory monster. Without Stanley urging her to keep writing, Shirley would have wandered into traffic long ago.

Into this unholy mix comes Rose and her husband Fred (Logan Lerman). Fred is a young adjunct professor assigned to Stanley's department. He and Rose move in with the battling Hyman-Jacksons at the beginning of the semester. It's only supposed to be for a little while, just until they can find their own place in town. In exchange for room and board, Rose helps out around the house. Shirley at first eyes her with suspicion, and lashes her with an acid tongue. But when Rose proves she can take the abuse, Shirley enlists her for a little larcenous book research. Rose becomes unexpectedly pregnant and slowly falls into a psychosexual codependence with Shirley.

Director Josephine Decker got her start as an actress in the mumblecore movement of the early Obama years in Joe Swanberg's Uncle Kent. The primary imprint those zero-budget digital flicks have had on film and television has been the naturalistic acting style of people like Lena Dunham and Greta Gerwig. Like her contemporary Gerwig, Decker flourished when she moved into the big chair. Shirley carries the imprint of an earlier, much more experimental strain of American DIY filmmaking, exemplified by Memphis director Morgan Jon Fox. Decker and cinematographer Sturla Brandth Grøvlen make balletic use of handheld cameras, always finding fresh, perfect angles. The lighting is low, and the colors frequently luminous. They have a particular love for playing shadows off Odessa Young's gothic cheekbones.

The real fireworks happen when the camera is pointed at Elisabeth Moss. She goes full Bette Davis as she portrays Shirley's bursting portfolio of mental illnesses. I feel like I've typed these words before, as Moss just keeps topping herself, but this may be her best role yet. Shirley is a snarling, feral intellect, at once cunningly manipulative and completely unguarded against the microaggressions of daily life.

After a recent panel at the Oxford Virtual Film Festival, I came to realize that what defines experimental film is the filmmaker's devotion to finding new and unusual processes to create their art. Decker's former work such as Thou Wast Mild and Lovely and Madeline's Madeline, both of which screened at Indie Memphis, look much more experimental than Shirley. But Shirley is deeply concerned with the artistic process. Shirley's toxic relationships with her husband and houseguests are integral to her writing. Her seduction of the increasingly confused (and increasingly pregnant) Rose is more like a systemic psychological dismantling. But when Shirley finishes her novel and discards the muse she no longer needs, Rose emerges stronger and more self-assured.

There are a lot of influences bubbling under the surface of Shirley, such as Who's Afraid of Virginia Woolf? and Bergman's Persona (a film with which feminist filmmakers seem to have a love/hate relationship), but the director's vision emerges as something more than the sum of its parts. Decker has crafted the first masterpiece of the young decade.

Shirley is showing on Hulu.