A local shoe designer is making a big step into the athletic shoe scene.

A Navy veteran, an English teacher, and an athletic shoe designer walk into a bar ... It's not a joke; it's Memphian Chris Burns' life — one that is reflected in every shoe he designs with ARCH, his one-man company.

In February, Memphian Burns successfully campaigned on Kickstarter for ARCH — which stands for Athletes Require Competition and Heart — and raised $3,446 to start designing running sneakers.

"When you're a black guy, you automatically start thinking about handouts, people saying you're getting welfare," Burns said. "I didn't want to do Kickstarter because it felt like welfare to me, which was stupid, but that's the way you think when you've been taught to be self-sufficient. I had to eat that — it's not. You're actually offering a product when you do Kickstarter."

Burns quit his job teaching creative writing to sell the shoes he designs full-time after he made thousands of dollars from selling other types of athletic sneakers, such as Nikes, through his online shoe store. After a few manufacturing hiccups and an ill-timed Kickstarter in December, Burns' experience with shoes has been a bumpy ride, but it wasn't enough to deter him.

It wasn't a large jump for Burns between selling other brands of shoes and creating his own brand. According to him, there's not much technicality to running ARCH running shoes.

The sole is thinner, which makes the shoe lighter.

"The shoe is not very technical at all," he said. "What I'm finding out is Nike Frees [and other shoes like it] cost $160, but they 'don't have any technology.' I'm trying to figure out how you raise the price of something when you take the technology out of it?"

With his ARCH brand shoe, his design inspiration comes from his varied past.

One style of his casual athletic design is called "Navy Field Day," which pulls from greens and browns that remind Burns of his eight-year tenure in the U.S. Navy. 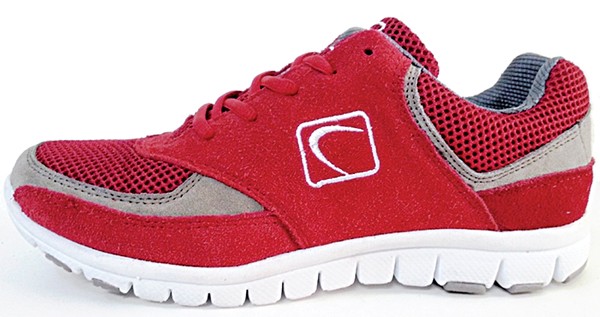 Others feature colors from the schools where he got his bachelor's and master's degrees. He has a Pittsburgh Steelers-themed shoe in black and gold. Another is decked out in red, white, and blue — not just for the United States, but for the school colors at Crawford High School in San Diego, California, where Burns coached basketball.

As for the names, each shoe he designs starts with the letters 'CG' and end with a number in tribute.

"CG is Courtney Graham. [He] played point guard at Crawford," he said. "He was murdered three years ago. He was a mentor. He was walking home and some guys drove by and killed him. It's a memorial to him, so I've never changed the name of the shoe. I always make a shoe with the initials 'CG' for Courtney."