Slide on In: A Visit to the Downtown Slider Inn

The beloved Midtown bar gets a second location Downtown.

When it comes to building restaurants that are the embodiment of a guy in a baseball cap with a rescue dog, no one does it better than Aldo Dean, who has taken eye-rolling double entendres and clap-back food descriptions on menus and elevated the concepts to become some of Memphis' most beloved dining and drinking establishments. Some of his best work is on display at the second location of Slider Inn, located Downtown at 363 Mulberry.

Dean, the man behind Bardog Tavern, Aldo's Pizza Pies, and others, went grandiose with the new Slider, taking everything that works at the Midtown location and amplifying it into an indoor-outdoor playground of Jameson slushies, dog-friendliness, and ample bar offerings. One hardly knows where to start the journey through the Downtown Slider, but I'll start at the downstairs bar.

The bar in the downstairs portion of the main building is Slider's largest and, on the rainy night I visit, still full and being tended by Rondi McNeal. The main downstairs dining area has massive garage doors that can and will open to the outside on nicer days. Above it lurks the "Lift," more of a private dining option for parties who want to get weird on its sprawling leather couches.

Next door to the main building, accessible via covered walkway, is the "Garage," which houses yet another bar, more TVs, and, like its sister bar nearby, the ability to open to the elements. Finally, there's "Slider Out," an outdoor area featuring the Tapbox, Slider's mobile beer cart, and the Slider Rider, their food truck.

Emboldened by the massive amount of space they now have to sling food and beverages, Slider's Downtown menu is also larger. It features lobster popcorn, made of tempura-fried chunks of lobster served over popcorn, and vegan buffalo wings made of tofu and cauliflower, among several other new menu items. 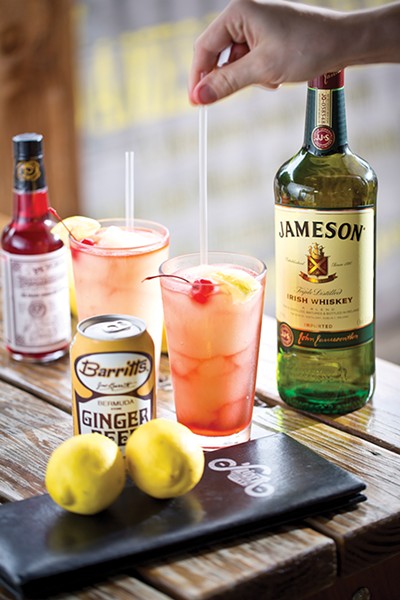 Not to be outdone, the slushie machine is also larger to accommodate for the popularity of their Jameson slushies. "It's bigger, and we're still constantly filling it up," assistant manager Ariana Geneva says with the confidence of a woman in charge of a larger slushie machine.

The new Slider will also feature a chilaquiles bar, opening in the spring, where the weekend brunch crowd can pay a set amount and build custom chilaquiles.

Beyond the name recognition, it's the location's décor that gives it away as one of Dean's thoughtfully planned restaurants. The Downtown Slider has an industrial feel owing to its former existence as the Kisber truck garage. Marketing manager Eric Bourgeois points out that it's a great example of adaptive reuse, and I agree because, any second, I'm afraid that Rammstein will come out and play a set.

All its restrooms are unisex, lit by dangling mannequin hands clutching bulbs. The theme is wrought iron, the window treatments are Jameson bottles, and the thoughtful details can best be described as toolbox-chic.

Slider Out is its most notable game-changer, as it will operate as its own entity once the weather warms, the South Mainers descend from their loft spaces, and Memphis in May plunges the city into chaos and beer.

Food will be handled by the Slider Rider and beers by the Tapbox, freeing up the indoor bars and kitchen to cater to a separate set of masses. Tabs will not translate between the outdoor and indoor spaces; outdoor tabs will be handled via a different payment platform. Soon Slider Out will morph into its own event space with a stage for music and screenings.

Much remains the same when sliding out of Midtown and into Downtown, though. Happy hour still includes $1 off select drafts, domestic bottles, well booze, and house wines from 5 to 7 p.m., Monday through Friday. The bar caters to its canines with an outdoor dog water fountain and dog biscuits available.

And the staff of Aldo Dean's bar empire, over 200 strong now, is still content to lube up the city with a Jameson slushie or five as we rapidly approach Patio Season 2020.