The billionaire Reimann family — owners of Krispy Kreme, Einstein Bros. Bagels, Panera Bread, Dr. Pepper, Stumptown Coffee, and a long list of other brands in your pantry and bathroom cabinet — recently confessed that their progenitor was a straight-up Nazi. Albert and Albert Jr., who died in 1954 and 1984, respectively, didn't speak of those days. The Reimann heirs believed a 1978 report had uncovered all there was to see about their family's Nazi past.

They maintained that they were "reluctant" employers of slaves and prisoners of war in their chemical plants: That was the cost of doing business back then. Further research, commissioned by the family a few years ago, revealed otherwise. Father and son were avowed anti-Semites and early donors to the SS. Huge Hitler fans.

"They belonged in prison," a family spokesman told German newspaper Bild. The Reimanns pledged to donate $11 million to charity after learning the extent of their ancestors' crimes.

"Never get another dollar from me again," one Twitter user said. "And I bet I'm not alone."

Others: "Oh well, another business I don't have [sic] patronize."

"You have no loyalty and made a lot of enemies."

"Never buying a snow cone from y'all again."

Okay, wait. My bad. I must have gotten my notes mixed up. Those quotes aren't about the Nazi bagel family. That story barely registered a blip on the outrage meter; I stumbled across it five levels deep into the Washington Post app. 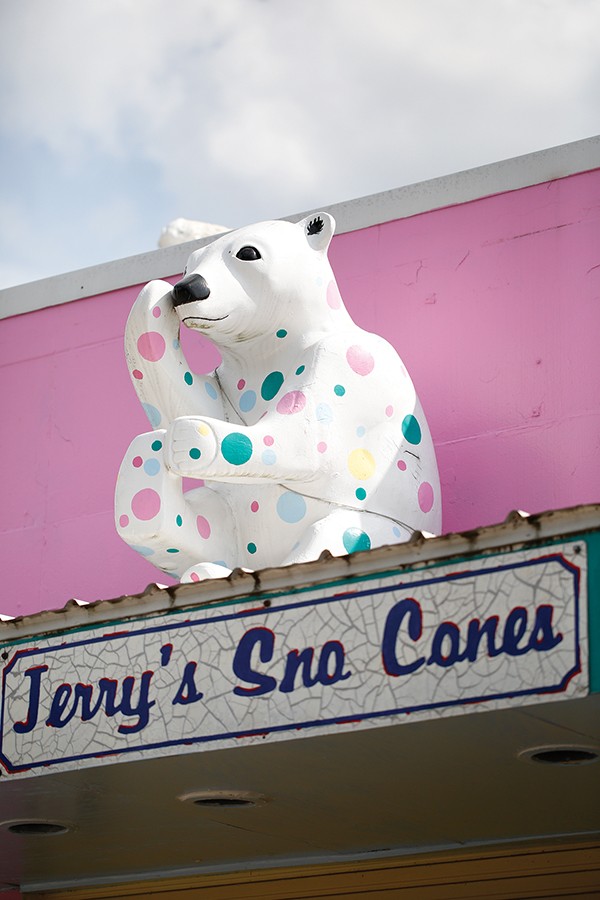 No, those comments were a sampling of responses to locally beloved icy treat purveyor Jerry's Sno Cones after they tweeted a picture of an orange UT-themed Jerry's shirt with good luck wishes for the Volunteers in the NCAA Tournament. For this apparent mortal sin, a small army of snow cone snowflakes masquerading as "real Tiger fans" bullied @ConesJerry into deactivating their account.

If you weren't convinced by now that Twitter has outlived its usefulness as a medium for polite and reasonable conversation, re-read the sentence above. It's the most embarrassing thing a handful of people has done in the name of "Tiger Nation" since the Calipari lawn vigil a decade ago.

I only wish the person running the account — probably some teenage employee trying to build a portfolio for job applications — had been empowered to respond appropriately: "We'll sure miss you in the line this summer, @TiptonTyger5892335. We hate to lose a regular." Or "When the Tigers make the tournament, we'll post something for them, too." They could have turned off notifications and deleted the app for a few days. Shortly after Jerry's was "canceled," Purdue sent the Vols and their orange-and-white trousers back to Knoxville.

Twitter is the only place where acknowledging the existence of other universities in the state is viewed with frothing rage as an affront to "901 loyalty," because who would say that out loud? That's the beauty/agony of the platform. You don't even have to consider whether your tweet is thoughtful, right, or stable. Just chuck it like a Frisbee and hope someone catches it. And if someone calls you out for saying something ridiculous? Well, they need to learn how to take a joke. I swear, for every connection I've made on that website, there are at least two asinine takes I wish I'd never read.

Want to be angry at a business? There are so many to choose from, and so many legitimate reasons. Get mad that one chicken restaurant can't stop bankrolling anti-LGBTQ organizations or disrupting traffic on Poplar. Stay forever mad that one family owns almost every bagel and coffee chain in America — a fact that depressed me before I learned they're a couple generations removed from actual Nazis. Look around and observe all the conveniently timed exterior projects in Memphis: How many companies could have spent their tax cuts on payroll and hiring, but opted to paint the building gray instead? Shake your fist at pay inequality, crappy family leave policies, CEO compensation, and all the other gross side effects of capitalism. Instead folks are pitching fits over a snow cone stand and an orange T-shirt. Very cool.

Jen Clarke is an unapologetic Memphian and digital marketing specialist.