Soccer and Beer and Memphis: A Perfect Combination

The last professional soccer game I attended was the Memphis Rogues. I played the game a little in lower school, but can't be accused of taking it seriously. If I'm going to be honest, I'm one of the few University of Alabama alumni who doesn't take that sports program seriously either. I have, however, been to enough baseball and football games to know that what, and more importantly, how you drink at these things is crucial. And that may be the real sport.

Memphis has a professional USL soccer team now, the 901 FC, and I felt compelled to see its inaugural match-up with the Tampa Bay Rowdies. Admittedly, soccer is a lot tighter on the clock than football, and baseball doesn't even have one. Soccer games all run 90 minutes, more or less, so you haven't got hours to burn. The good people over at the Bluff City Mafia — the 901 FC's supporter club — got around that hurdle by kicking off the pregame festivities at 2 p.m. down at the Brass Door. This was followed by a short, boozy march — complete with flags and chanting — to AutoZone Park for the 6 match. Good people. 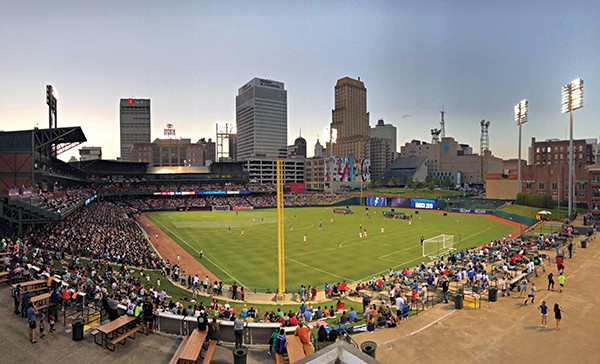 So, given the time involved, Game-Day Drinking is like its cherished cousin, Day Drinking: It's important to set the right pace. You don't have to dial it back to "lunch with Grandmother," but you certainly need to keep it a click or two below peak "Warren Zevon."

For her part, the enchanting Mrs. M thought that arriving at the Brass Door at 4 p.m. was the perfect touch of fashionable lateness. By that time, the place was filled with an impressive amount of whooping and hollering. Impressive, because there was absolutely no reasonable cognitive association these happy people could possibly have for a team that had never played before. Except, of course, that it was Memphis' soccer team. And there they were, leading bar-wide cheers with perfect strangers. It makes a fella proud.

Beer-wise, there was a lot of Guinness being slung about, but there always is in Irish bars. And for a game-day brew, it's not a bad choice. The ABV is a relatively low 4.2 percent, and while it tastes heavy, the truth is that at 125 calories, it's only 15 more than Bud Light.

Outside, the steam was rising from a recent rain, and inside, it was crowded — and I'm fat. So I went with a Wiseacre Ananda — light and crisp — but you might want to avoid it for a long haul. Mrs. M had a Bud Light; a lady is entitled to her mysteries.

The lovely thing about soccer is that it is one of the few times Memphis seems cosmopolitan, as you move through a crowd hearing Irish-English, Australian, along with some lively Spanish in Latin American accents. Mrs. M's grandfather was English, so I was curious — for purely sociological reasons — to see if all these chants and beer-swilling would trigger some first-rate English football hooliganism in her. She was too busy making friends with some people from Philadelphia, but the night was still young.

We marched and chanted and finally turned the corner into AutoZone Park. For some reason, being in a stadium always makes me slink back to domestic brews, although you can get a limited selection of local craft beers at the game.

The readers who had to google to find out just who the hell the Memphis Rogues were might not have the association of cheap domestics and sports, but they work well. You want it to be tasty and drinkable, but you also don't want to think about it too much either. I had a big, tall Budweiser. True, soccer really isn't America's game, but Bud is owned by the Belgians now, so it's a topsy-turvy world these days.

Incidentally, Mrs. M never went even remotely hooligan on me or anyone else. That woman is a delight.