Some of the Best Nachos in Memphis

The first ever plate of nachos was created in 1943 at a restaurant called the Victory Club in the city of Piedras Negras, Coahuila, Mexico, by the restaurant's maître d'. The maître d's nickname was "Nacho," and he called his dish "Nacho's especiales."

Now, we all know what happens next in this story, right? Some genius in Memphis went and put barbecue on top of the nachos. But it doesn't end there. There are some exceptional plates of nachos served in this city.

Badass Nachos at Sweet Grass Next Door come in two sizes—1) huge ($14) and 2) who-even-knew-they-made-plates-that-big ($24). Walk in on a Saturday afternoon and you are likely to see an order on most tables.

What makes them so special? The heaping mound of beef brisket that boldly tops the chips, that's what. This heaping mound also manages to make this gluttonous dish somewhat refined, as do the perfectly cooked onions and peppers. Even without the brisket, the Badass Nachos would be decadent because of the generous amounts of red chili sauce and queso. (I have vegetarian friends that swear by this.) The chili sauce is mild, as is the queso, but the jalapeños are cut thick, and they don't play. Fresh tomatoes, cilantro, and a generous dollop of sour cream complete the badassery.

You need at least two or three people to polish off the regular (huge) order, and you definitely cannot achieve total destruction without the aid of a fork. The thin and crispy tortilla chips cannot hold up to the toppings for long, but the half-crispy half-gooey results are delicious. A tendril of beef, a juicy sliver of pepper, or, at the very least, a drop of sauce is going to land on the table or your pants or probably both, but you won't care.

These bad boys can't be contained by a "to go" box, so don't even think about it. Have a seat, roll up your sleeves, and enjoy. 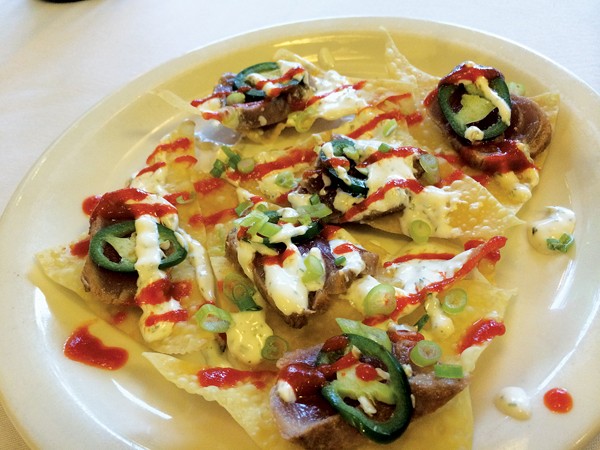 The Asian Nachos ($10) on Tsunami's Izakaya (snack plates) menu are definitely in a more delicate category than their across the street neighbors, but they boldly go where no one has gone before. Six thin, lightly fried wonton chips line the plate. Placed in the center of each is a perfect bite of tuna tataki. House-made cilantro crema and Sriracha are drizzled on top along with a sprinkling of the finest green onions you've ever seen. The thinly sliced jalapeño is serious, and the Sriracha seals the deal. These delicate beauties pack a serious punch.

Don't worry, it hurts so good.

Incorporating a two-bite method on each chip is the way to go. Yes, use your hands. The first bite is for the tuna, and the second is for the last little bit of crema left on the chip. Go ahead and scoop up some more off the plate for extra cooling. Take a minute to appreciate the dish as a whole before digging in, and definitely save the creamiest chip for last.

If the wontons piqued your interest about what can constitute nachos, then the next logical step is to try the Naked Arepas ($7) at Arepa & Salsa. These are Venezuela's version of the nacho. An arepa is a flatbread made of ground corn (maize) dough or cooked flour. It's not clear why the dish is described as naked, because it is anything but.

The arepas are sliced into triangles and topped with your choice of shredded beef or chicken (or both!), chopped lettuce, thinly sliced avocado, crumbled cotija cheese, and a generous drizzle of "house sauces." The house sauces taste like mild versions of ranch and Thousand Island dressings.

Overall the dish is very mild, but the arepas really make it pop. They are at once doughy yet crispy; fried but not greasy. They have a distinctive flavor and seem right at home under a mess of toppings. The shredded chicken is nicely seasoned and has a delicious tang. The arepas easily hold their weight and maintain their crunch. It's hard to decide whether to use a fork or not.

The Naked Arepas are listed as an appetizer but can certainly be a meal for one. After one bite, you probably won't want to share.