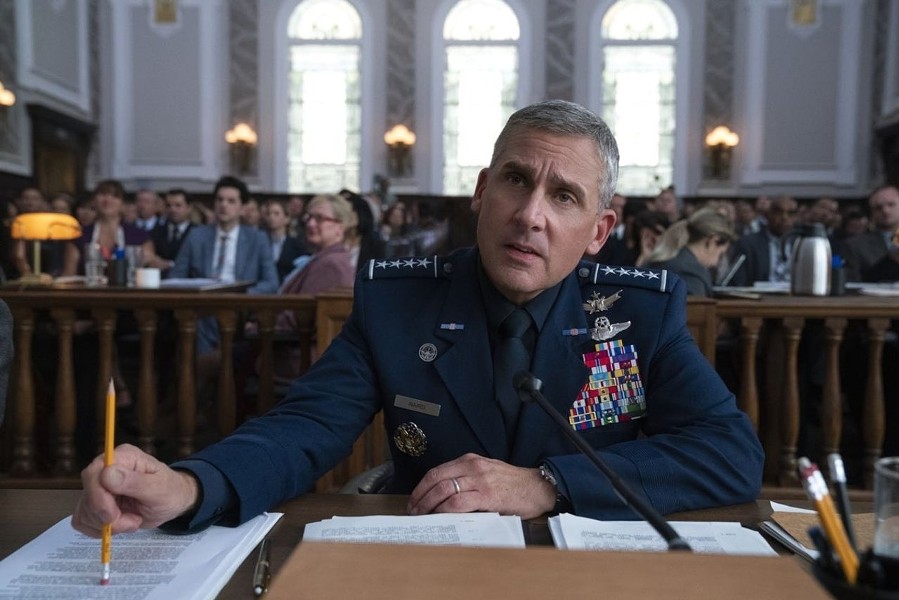 Space Force is a new television show on Netflix starring Steve Carell. It was created by Greg Daniels, the veteran writer and producer who started his career with The Simpsons and had a hand in creating shows such as King of the Hill, Parks and Recreation, and the American version of The Office.

The show’s jumping off point is the establishment of the real-life Space Force. President Trump first proposed creating a sixth branch of the armed forces early in his term. It was, like everything else he has farted out of his mouth hole, a stupid idea. For one thing, who is a Space Force supposed to fight? Aliens? The limited amount of actual war-making which can be done in space, like spying, anti-satellite weapons, and watching for incoming nuclear missiles, has been handled by the National Reconnaissance Office and the Air Force Space Command for 40 years. The last thing we need is yet another extremely expensive military branch squabbling with the existing ones for prestige and funding.

Collaborators Daniels and Carell knew a comedy opportunity when they saw one, and got the greenlight from the bottomless Netflix money bin in January, 2019. I’m sure when they pitched the show they thought it would be harmless fun. Surely it would never come to pass that anyone would be stupid enough to actually militarize space. But since we’re apparently living in the stupidest possible timeline, the United States Space Force came into existence last December. According to Wikipedia, it currently has 88 members on active duty. For comparison, the Air Force has more than 320,000. It seems the current administration is immune to satire, because their inanity surpasses anything a writer can imagine.

I have to admit, while I was binging Space Force episodes, I was having trouble concentrating. I was constantly being distracted by videos flashing across my phone screen of police beating citizens who are protesting against police brutality. Maybe satire really is dead.

But I’ll tell you who is dead for sure: George Floyd. He was executed in the street by four Minneapolis police officers. In broad daylight. While they knew they were being filmed. He was accused—not indicted by a grand jury, not convicted by a court of law, not sentenced by a judge—accused of passing a fake $20 bill at a neighborhood store. Maybe he did it, maybe he didn’t. It doesn’t matter. Even if he was guilty, even if he had personally carved the plates and printed a million dollars worth of counterfeit bills, the legal penalty would not have been death. George Floyd was murdered on the street by agents of the state whose job it ostensibly was to protect him. And us.

But there’s more. Before Floyd was murdered by police, he had recently recovered from a case of COVID-19. He escaped the fate of 108,000 of his countrymen and -women who have died from the disease so far this year. And that’s a conservative number.

Why is Floyd dead? Because he was black. The vast majority of people killed by police in this country are black. Counties with higher-than-average, per-capita black populations account for 60% of the COVID-19 deaths in this county. Black people are more likely to live in poverty than any other ethnic group. The list goes on.

Did I mention there’s a economic depression directly caused by Trump’s badly botched response to the worst pandemic in a century? 42 million people have lost their jobs since February. It’s no wonder people have taken to the streets.

And what is the government’s response to these citizens following the oldest of American traditions, holding public demonstrations to petition their government for redress of grievances? They beat them. They use chemical weapons long banned from the battlefield against them. They arrest them without due process. They lock them in crowded detention cells which are ideal environments for coronavirus transmission.

So, excuse me if I find it hard to focus on Steve Carrell’s little ha-ha show.

The first martyr of American democracy was Crispus Attucks, a person of color who may have been an escaped slave. Attucks was the first person killed on March 5th 1770 by British troops trying to "suppress a riot" in an event which Samuel Adams dubbed The Boston Massacre. John Adams was the lawyer defending the troops who pulled the triggers that day. In court, the future American president accused Attucks of provoking the soldiers with his “mad behavior." Other witnesses claimed he was peacefully leaning on his walking stick when he was struck down by British bullets.

The values of the revolution inspired by the Boston Massacre were summed up seven years later in the Declaration of Independence. “We hold these truths to be self-evident: That all men are created equal, and endowed by their Creator with certain unalienable Rights, among them Life, Liberty, and the pursuit of Happiness.”

When those words were written, many of the Founding Fathers thought “all men” only applied to white men who owned property. Among the “property” those white men owned were black people. The glory of the Founders words did not match the shame of their deeds, and we are still living with the consequences.

But the fundamental truth of those words have inspired billions of people to create a better world. Just as Christianity began as an ethnocentric sect and expanded into a religion for all of humanity, so, too, has the American creed expanded. In the 1860s, we had a national conversation about whether those words applied to black people. 650,000 people died before we decided that they did. In 1919, we decided that “all men” included women, too. Expanding our vision of freedom and justice to include all humans is the true American way. If you accept that everyone is “endowed by their Creator” with the rights of “life, liberty, and the pursuit of happiness," then of course black lives matter.

On September 12th, 1962, President John F. Kennedy gave a speech at Rice University that announced America’s intention to land astronauts on the moon. “We have vowed that we shall not see space filled with weapons of mass destruction, but with instruments of knowledge and understanding,” he said. “We set sail on this new sea because there is new knowledge to be gained, and new rights to be won, and they must be won and used for the progress of all people.”

That’s why Trump’s concept of a Space Force is so repugnant. “It is not enough to have an American presence in space, we must have American dominance in space.” he said.

Trump’s words have no glory, and his deeds seek to undo centuries of progress. This was never more evident than last Monday, when his corrupt, bootlicking Attorney General William Barr ordered American policeman and soldiers to violently attack peaceful protestors in front of the White House. They used tear gas, a banned weapon of war, against clergymen rendering aid on the steps of St. John’s Episcopal church. The President threatened to order the military into American cities to “dominate” the protestors. Then Trump, flanked by uniformed thugs, walked to that church for a photo op. It was the most disgusting performance of fascism I or any other living American have ever seen by a President.

In retrospect, Trump’s dalliance with the “Space Force” was a warning sign of a dangerous would-be dictator who would destroy the Republic in the same way Julius Caesar destroyed the Roman Republic—by turning the military into a machine of domestic oppression. That’s why the humor in Space Force rings so hollow. The very first “joke” in the series sees Carrell’s General Mark Naird, the leader of the Space Force, stuffing a civilian in the trunk of his car and ordering troops to illegally detain him at gunpoint. This is not Chaplin in The Great Dictator taking the piss out of Hitler. This is normalization of fascism. Oh look, Trump’s destroying fundamental American values and seizing dictatorial control. Ain’t he a stinker?

Maybe that wasn’t the intention of the Space Force producers, but that’s how it reads in June, 2020. Notably, Trump’s name is not used, and neither he nor any of his family are seen in Space Force. If it was, you would be either slapped in the face by the banality of Trump’s evil, or triggered into fascist hero worship, depending on your current state of conditioning. The spell of normalization, the “Oh, it’s going to be fine. Let’s have some laughs.” would be fatally broken.

We cannot accept this current state of affairs as normal, or as acceptable, or dismiss it as funny. We must all realize are in a fight not only for justice for George Floyd, but for our Republic, for our lives, and—given the looming catastrophe of climate change—for the future of humanity.