A Bond-stravaganza of immense proportions.

These days, everyone wants to be James Bond.

Spectre is the 24th film in the Bond franchise, which was a franchise before compulsory franchise status was a thing. Maybe all franchises evolve into Bond. This year alone, we've had Furious 7, which transformed that franchise from car chases to spy jinx; Mission: Impossible — Rogue Nation, which shared Spectre's theme of a threatened shutdown by nefarious elements in the government; and Avengers: Age Of Ultron, whose bad-guy super-organization HYDRA's logo bears a suspicious resemblance to SPECTRE's octopus.

So how does the real thing stack up to the legion of imitators? Pretty well. Spectre comes out of the gate strong with an extended, Birdman-style continuous tracking shot through the streets of Mexico City during a Day of the Dead parade that ends with Bond accidentally blowing up a building. That's just the first of the visual confections director Sam Mendes and cinematographer Hoyte Van Hoytema have cooked up. As Bond tracks down the former M's killer, we are treated to a wide-screen travelogue through the Austrian Alps, Rome, Tangiers, and the Sahara desert. 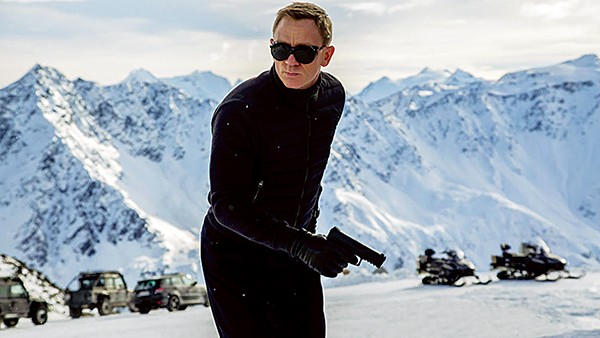 The stunning photography is easily the best part of the film. Daniel Craig, now in his fourth Bond movie in nine years, is in good form. He's weathered one of the series' low points with Quantum of Solace, and with director Mendes, has now created two great Bond films in a row. To say this is a more "serious" take on the character depends on how seriously you can take male power fantasies and consumption porn, but at least he's fun to watch. He even breaks a sweat once as he careens around in an insane aerobatic helicopter sequence. His nemesis this time around is Christoph Waltz who, let's face it, was born to play a Bond villain. He gets one of the most awesome character introductions of the year sitting in silhouette at the head of the SPECTRE table.

Bond's female companionship is provided by Monica Bellucci as the Italian bombshell Lucia and Léa Seydoux as the reluctant daughter of a SPECTRE agent. The sparks really fly between Bellucci and Craig, while Seydoux is essentially a cute nonentity.

It's probably no surprise to anyone who has seen a few Bond movies to say that the plot of Spectre is paper-thin. Mendes attempts to tie together the previous three Craig movies, but the threads are strained at best. Bond sometimes goes from place to place for no discernible reason beyond a need to get to the next set piece, but the individual sequences are strong enough that you may not notice or care. Like Skyfall, Mendes goes on too long and tries too hard to get some pathos out of Bond's empty life. But the producers have put $300 million into this Bond-stravaganza, so they need to feel like they're getting their money's worth. You probably will, too.