Spider-Man: Into The Spider-Verse

The most fun you can have on eight legs

All superhero movies should be animation.

It's really not that far from where we are now. For large chunks of, say, Avengers: Infinity War, everything the viewer sees was rendered by a computer. It's only the need to have Chris Evans and Scarlett Johansson appear as Captain America and Black Widow that keeps them from going totally CGI. This grounding in the real world is necessary in order for us to take seriously these stories of men in tights saving the world by punching each other.

The problem with "grounding" comic book stories in the real world is that you lose an essential element. Read Scott McCloud's Understanding Comics: The Invisible Art, and you'll never look at a Spider-Man comic book the same way again. Comics are not just a storytelling medium — they're vastly inferior to the written word in that regard. There's also visual and design elements that are unique to comics, the most obvious being combining words and design elements to evoke sound. Pow! Thwack! Bamf! 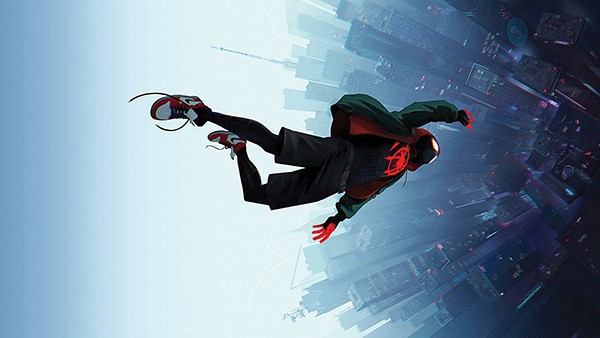 Divorced from the vibrant page layout, superhero stories can seem goofy. When Spider-Man is just lines on a page, you know how seriously to take his battles with Mysterio, the guy with the glowing fishbowl for a head. But every live action superhero movie since Tim Burton's Batman has had to add a line or two about how funny it is that a guy dresses up like a bat to fight crime, because it's frankly ridiculous to pretend people act like this in real life.

Spider-Man: Into the Spider-Verse uses animation to embrace the conceits and eccentricities of comics. It takes its cues more from Edgar Wright's Scott Pilgrim vs. the World than Christopher Nolan's The Dark Knight Rises. It also takes as its jumping off point a very comic premise, the "what if?" story. Sure, everybody knows Spider-Man is Peter Parker — a white, working class college student and cub news photographer raised by his aunt in Brooklyn. But what if Spider-Man was a Brooklyn teenager named Miles Morales (voiced by Shameik Moore) raised by a Latinx nurse (Luna Lauren Velez) and a black police officer (Brian Tyree Henry). And also, there are five other spider-folk.

Now, we're getting comic book-y! Publishers like Marvel beta testing new takes on their cash cow characters led to superhero comics being the first sci fi-adjacent genre to embrace multiverse theory, which solves some issues in quantum mechanics by positing that ours is one of an infinite expanse of parallel universes where everything that can happen, does happen. Super-mobster Kingpin (Liev Schreiber) hires super scientist Olivia Octavius (Kathryn Hahn) to build a machine to access these parallel dimensions so he can retrieve fresh versions of his deceased wife and child.

Naturally, Peter Parker (Chris Pine) tries to stop him from running an unlicensed particle accelerator in Kings County. But when he fails, it's up to Miles, who has been freshly bitten by a radioactive spider, to save reality. Since Miles can't figure out how to stick (and more importantly, unstick) to walls yet, he needs help, which comes in the form of alternate spider-people. Peter B. Parker (Jake Johnson), is a down-on-his-luck, freshly divorced, middle age spider-dude. Spider-Gwen (Hailee Steinfeld) is from a dimension where the radioactive spider bit Peter Parker's crush instead instead of him. Spider-Noir (Nicolas Cage) is a hardboiled, arachnid-themed crime fighter from a black-and-white universe. Peni Parker (Kimiko Glenn) co-pilots a mecha with an intelligent radioactive spider. And Peter Porker (John Mulaney) was bitten by a radioactive pig.

Freed from the dubious need for plausibility, Into the Spider-Verse spins wild visuals. Each character is drawn in the style of their own comics. Peter Porker, who looks like a Looney Tunes character, drops anvils on people and assaults his enemies with a giant cartoon hammer. Peni has an anime-inspired, epilepsy-unfriendly transformation sequence. The animators sometimes divide the frame into panel-like spaces. "Thwip" and "Pow!" appear to punctuate the action. During the dizzying finale, in which a newly empowered Miles tries to stuff the interdimensional genie back in the bottle, gravity and reality fail, and abstract bits of Brooklyn float by.

Impossible shots coupled with a breezy screenplay make this the most fun superhero movie since Sam Raimi shot an upside down Toby Maguire kissing Kirsten Dunst. With Marvel building toward an illusory finale and DC dead in the water, this is the fresh approach the genre needs. Don't just take inspiration from cartoons, be a cartoon.