Sports Talk on the Menu

Memphis is a town of many deep-rooted sports interests. Between the University of Memphis Tigers basketball and football programs, the Memphis Grizzlies of the NBA, et al, sports fandom in Memphis is as passion-filled and potentially divisive a subject as religious faith. And as revered as these teams and institutions are, so too are the newsbreakers and speculators that populate the local sports talk radio airwaves and newspaper pages. Inevitably, these sports media figures are recognized for their talents and influence in numerous ways, including the illustrious honor of having menu items named for them at local restaurants.

Chef Kelly English's The Second Line features a po'boy sandwich called the Verno on its menu, a tribute to 92.9 FM midday radio host and Grizzlies TV commentator Chris Vernon. According to Vernon, the naming of the sandwich came from an on-air football bet between himself and Chef English.

"The deal was, the Cowboys and Saints were playing. This was before The Second Line opened," he says. "If the Cowboys won, he had to name a sandwich after me. If the Saints won, I had to say 'Go Saints' coming in and out of every segment on my show. The Saints absolutely destroyed the Cowboys, but he named the thing after me anyway."

The sandwich is built on a generous base of braised and shredded chicken thighs, topped with melted Swiss cheese, lettuce, tomato, and pickles on crusty French-style bread. 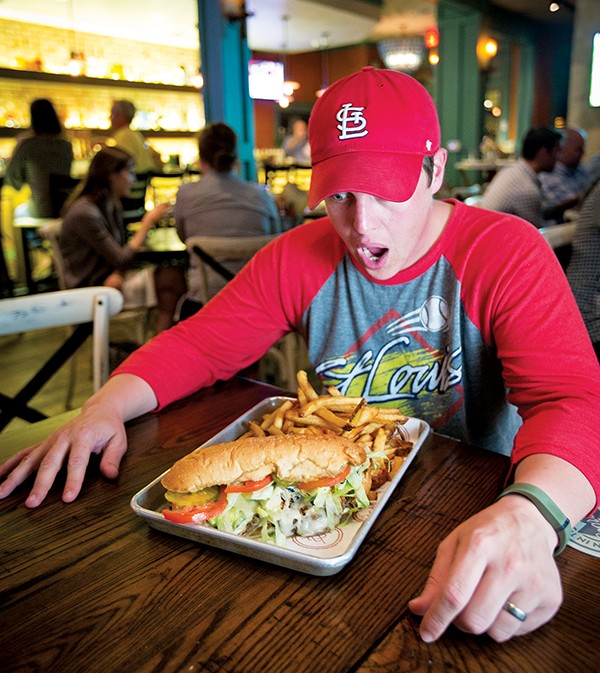 "I love it," Vernon says. "Kelly English is one of the best chefs in America, and there is a sandwich on his menu named after me. There's not a week that goes by that someone doesn't text or tweet me about that sandwich. It's unbelievable."

The menu at Republic Coffee boasts its own sports journalist-tribute item, a breakfast sandwich formerly known as the "Ahab." "It's funny, you always think that if you are going to have a sandwich named for you, that you would get to design the sandwich, or at least be asked if you want a sandwich named for you," says Geoff Calkins, the lead sports columnist for The Commercial Appeal and a morning radio host on 92.9. "But that didn't happen in my case."

In fact, Calkins didn't realize that the Calkins — large hunks of smoked salmon, cream cheese, capers, and onions, all packed inside slices of a toasted everything bagel — even existed until he walked in to Republic one afternoon after talking about great Memphis sandwiches on his radio show, and the barista asked him why he didn't mention his own sandwich.

"I had no idea. Apparently they re-named it after me because I ordered it so much," Calkins says. "I think I might have singlehandedly kept it on the menu."

"The fact that I had a sandwich made Gary [Parrish] extremely jealous," he adds, half-jokingly. "That's how he got his sushi roll. He lobbied on the air to get it because he was jealous of me."

Parrish, the evening drive-time host on 92.9 and a national columnist and TV analyst for CBS Sports, denies the claim.

"I would never be jealous of a man who turned a Harvard Law degree into a newspaper job," he says, returning the jibe. "In all seriousness, that may have been where the whole bit actually started." 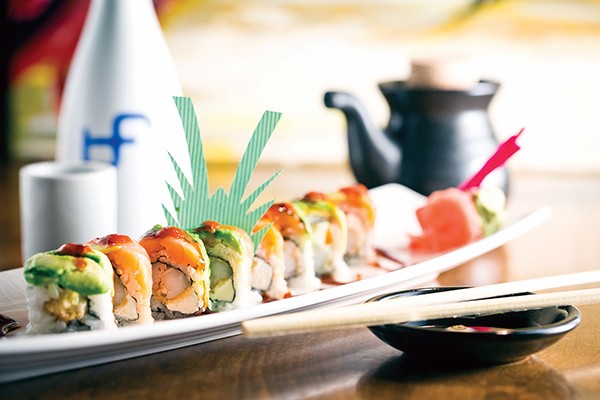 The bit Parrish is referring to was an on-air monologue about not understanding "anonymous donors" and wanting his name on everything, including fast-food items, buildings, etc. This resonated with the folks at Bluefin.

"Fast-forward a few weeks. I'm in Bluefin with some friends, and one of the managers approached me as I was walking out," Parrish says. "He said he listens to the show and would love to design a roll with me and slap my name on it. Next thing you know, it's on the menu."

Dubbed the G. Parrish Anxiety Disorder, Parrish's namesake roll is a kitchen-sink creation with tempura shrimp, crab, and cream cheese inside, topped with smoked salmon, avocado, eel sauce, and, most crucially, spicy Sriracha, which cuts through the richness of the other ingredients. Not surprisingly, the roll has become one of the restaurant's most popular items.

"I'm genuinely and oddly proud of how everything has turned out," Parrish says. "I honestly thought this would just be something that might be funny to me and only me for a few weeks or months, and then they'd change the menu and it would just go away. But here we are, all these years later, and it's still there."

Of course, anyone who has listened to sports talk radio in Memphis for more than a few minutes is surely familiar with the legendary George Lapides, currently a morning host on Sports 56. Lapides has been covering sports in print and on the air in this town for longer than some of his colleagues have been alive.

It is very fitting that Germantown Cajun restaurant Mister B's offers a dish bearing his name, the George Lapides Special. Lapides has long been a spokesman for the eatery — for my money, "I want to tell you about Mister B's" is up there with "I don't think the Cardinals will ever win/lose another game" and "I want to play" in the pantheon of George-isms. He is also, in fact, the inventor of the dish.

"I used to always get a cup of the crawfish etouffee as an appetizer, and I knew they had wild rice as a side" Lapides says. "One night I asked my server to fix me a big, dinner-sized plate of wild rice, with the etouffee poured on top."

"Oh, it's fabulous," he says. "It was just a word-of-mouth thing at first, but people started ordering it so much they put it on the menu. It looks strange to me to see it, but I don't mind."

Not to be outdone, the radio voice of the Grizzlies and afternoon host on 92.9, Eric Hasseltine, has his own signature menu item as well: a dessert-y cocktail at the soda fountain inside A. Schwab's called the Eric Hasseltine Cherry. The drink is simple but effective — and delicious. Think of a lighter, sweeter version of a Manhattan; house-made cherry syrup, bourbon, and bitters poured over "Sonic-style" ice nuggets in an old-fashioned soda glass, topped with fizzy soda.

"It's very flattering," Hasseltine says. "I'm not a huge partier anymore, but I've always been a whiskey guy. Sometimes I'm disappointed they aren't open later so I could go in and get one after a game."