As a piece of free media, Monday’s Channel 5 debate had something for everyone.

Monday's televised debate involving five Memphis mayoral candidates may have a significant effect on public attitudes toward the contestants. It certainly gave them all greater currency.

As almost all the initial media coverage indicated, the central event of the forum was a one-on-one verbal slugfest between Mayor A C Wharton and Councilman Jim Strickland, whom Wharton and most observers regard as the the major challenger to the mayor's incumbency.

But each of the other candidates involved — Councilman Harold Collins, Memphis Police Association president Mike Williams, and former Memphis School Board member Sharon Webb — had an opportunity, as well, to define themselves to a general audience that, for the most part, has been unfamiliar with them.

Collins and Williams, both of whom proved to be articulate and knowledgeable about the issues confronting city government, probably enhanced their vote potential.

Webb's case is harder to evaluate. In her favor is the fact of being the only woman in the race, coupled with a likable presence and a way of making the case that "it's time for a woman to take over" that is both eloquent and passionate. Detracting from her prospects, though, is her obvious unfamiliarity with city issues, the same weakness that caused her to draw a blank in a TV debate the last time she ran for mayor in the special election of 2009.

The exchange of attacks and insults between Wharton and Strickland clearly provided the most intense moments of the forum, which was televised by WMC-TV, Action News 5, and was co-sponsored by the Memphis Association of Black Journalists and the League of Women Voters.

Oddly, for an incumbent facing a challenge to his reelection, the mayor was the more aggressive in seeking out points of difference, and his assertiveness was nicely complemented with periodic references to the value of experience and a show of wit — as when he dubbed Strickland "Dr. No" for favoring clamps on police funding as budget chairman.

Contrasting that with Strickland's emphasis on public safety as a campaign theme, the mayor said, "I think candidate Strickland ought to be introduced to Councilman Strickland, because they are two different people."

Strickland responded by putting the blame for a reduced police presence on budgets prepared by the mayor, and he showed some polemical skill of his own in attacking redundancies in Wharton's administration, by suggesting that the mayor was trying to be "Noah," making allowances for two of everything.

Strickland and Wharton also quarreled over their relative support for summer jobs for youth, with each claiming credit for what appeared to be different programs in different eras.

While the bickering between the two may have shed some light on areas of city government, it also drew out both men as able combatants, with the normally easy-going Wharton showing some unaccustomed swagger — as well as the kind of agility that allowed him to co-opt emcee Joe Birch's introductory description of Memphis as "a city on the move" as a motto for his administration.

Strickland, meanwhile, seemed to flourish under the mayor's goading, which forced him away from his usual bullet-point recitations — that can turn into rote — into some impressively vigorous improvisations.

The Wharton-Strickland duel also gave Collins and Williams some good moments, allowing Collins, for example, to appear statesman-like in commenting on the "Tom and Jerry Show" aspects of the scrap, while Williams, commenting on the exchange of accusations between Wharton and Strickland on police issues, made the plague-on-both-their-houses observation that the city's active police force had shrunk from 2,500 to 2,000 on their watch. He was enabled thereby to tilt the police debate away from self-serving arguments about benefits into the realm of public safety.

Collins, too, had a telling retort to the mayor's experience factor, adding Wharton's seven years as Shelby County mayor to the six he has served as mayor of Memphis and contending that those 13 years have not netted much for the community.

But there are several more mayoral forums planned, all of them — like the one Monday night — good free-media opportunities for the less well-endowed candidates to catch up to the ones with bankrolls.

• In a bizarre turnaround, the Shelby County Commission elected a new chairman, Steve Basar, as its first order of business Monday, withdrew the honor an hour later in a reconsideration vote, then decided to defer further action on the chairmanship until next month.

Basar, a Republican member who served as vice chair of the commission last year, suffered his second consecutive disappointment. He had expected to be named chairmen last year, only to lose out to Democrat Justin Ford when Basar's GOP colleagues withheld their support from him.

This one had to feel all the more crushing, since Basar had believed himself to be the chairman-elect and was clearly savoring the triumph, until the reconsideration vote was called for by Democrat Eddie Jones, whose vote for Basar on a final ballot had originally broken a deadlock in Basar's favor.

Jones offered no explanation for his change of heart, though Basar would note to reporters afterward that "you saw who was sitting next to each other." Basar sat on one side of Jones; on the other side was fellow Republican Terry Roland, who had also sought the chairmanship and served notice that, given another shot at it, he was prepared to try again.

In deference to Jones, who will be absent at the commission meeting of August 24th, the next chairmanship vote will take place on September 14th, with current vice chair Van Turner, a Democrat, presiding. As County Attorney Ross Dyer noted on Monday, current chair Justin Ford's term will run out at the end of August. The unexpected — and unprecedented — circumstance of Monday had its roots in the shifting alliance structure of the commission, which, ever since last year's post-election reorganization, had drifted into a quasi-party-line division in which six Democrats, plus Republican Basar, had been one faction, with the other faction consisting of five Republicans plus Ford, who won his chairmanship with GOP support. 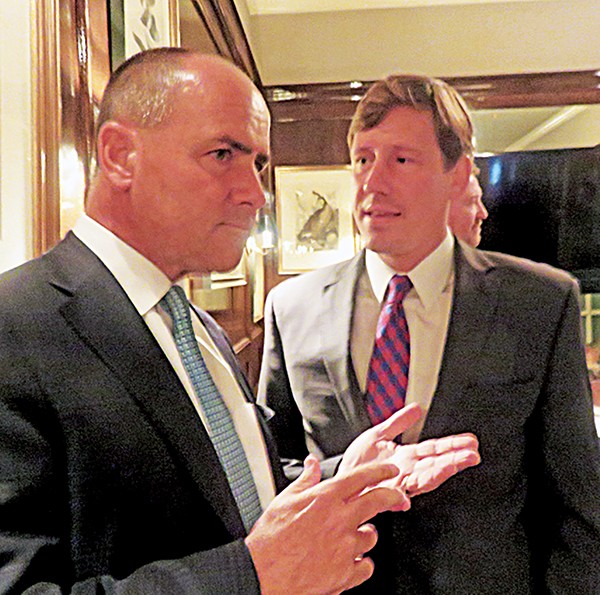